I flew with all four Bonka batteries last night. The batteries and the wires stayed significantly cooler than with two. I could barely feel heat from the batteries. The 10 AWG wires on the batteries were warm but not hot.

I did this as a way to manage the excess wire to keep them out of the props. Plus, it might remove a little resistance, probably not a significant amount though.

Here is how the batteries and wires are organized now: 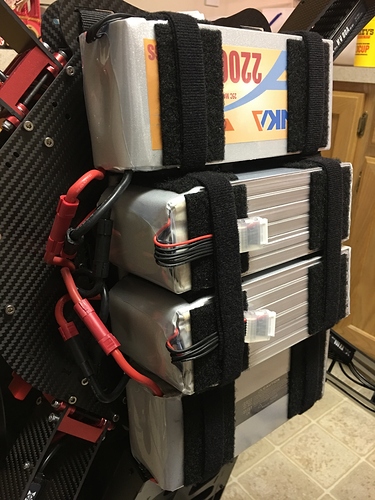 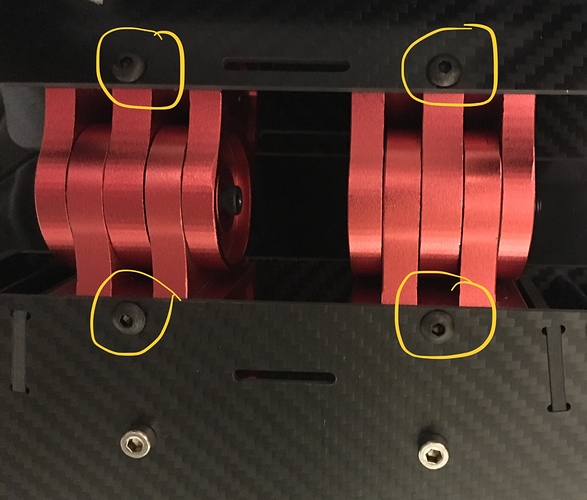 Good modifications, Gliderpilot! Thanks for sharing. How long a flight did you get using 4 batteries?

I flew until the battery level indicator on the controller read 0% which was only 26 minutes of flying. My cells ranged from 3.41 to 3.53 volts at that point.

Cutting the battery wires down as short as I did not only keeps them out of the props but they stay even colder now too.

The props were rubbing against the main plate when folded so I used my dremal to open up the holes a bit.
I made a paper template to make them all the same. Shown here with the template to show how much I removed. 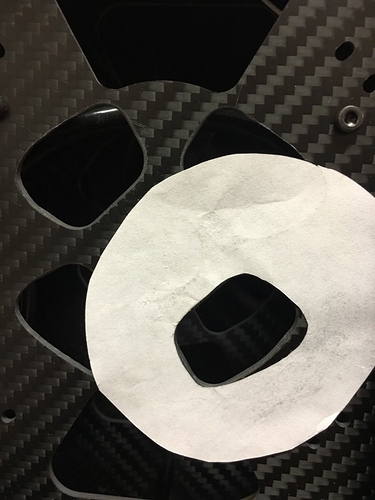 Now the holes match the pitch of the propellers and there is good clearance all the way around. 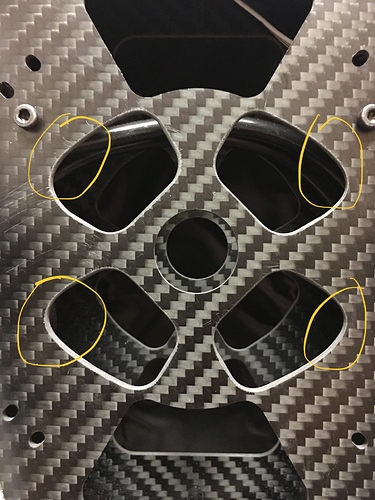 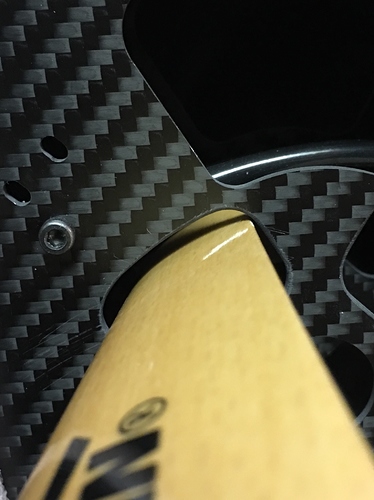 I designed a new quick latch for the arm hinges. They self latch when you open the arms and you hear them click when they snap into place. Then pull with one finger to release them. I made them out of 1/8” thick lexan. 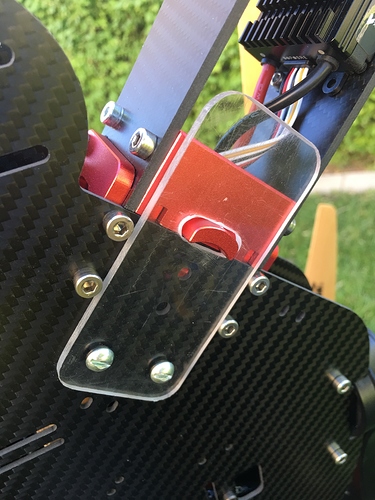 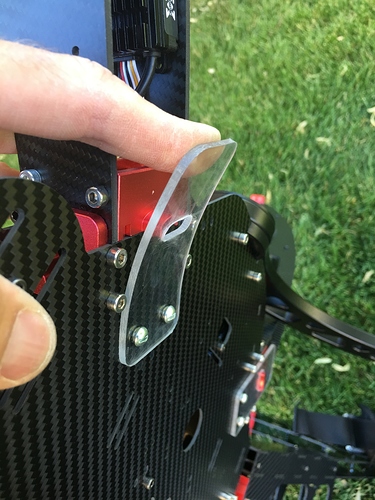 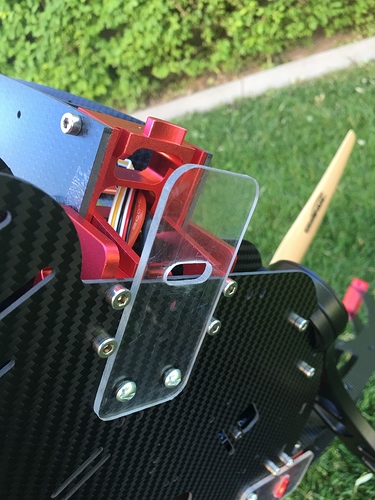 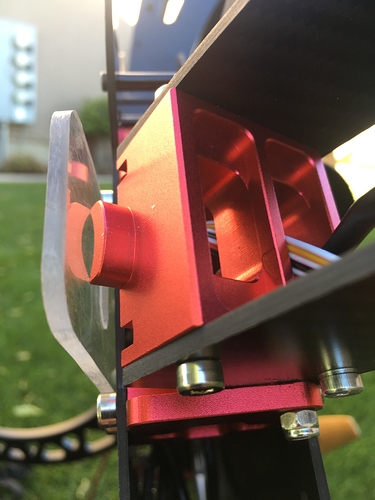 @Pdwhite, if you like this concept feel free to use it on future builds. It would certainly be cheaper to make than the twist knobs and you might be able to make them from scrap carbon if they were long enough to bend easy.

Here is the file:

GliderPilot, I have redesigned the latch for my own build to be very similar to that. However, I redesigned the main hinge block to eliminate the arc latch feature. This makes them easier, and less costly to machine. I also think its a more reliable, positive locking mechanism. The spring will be carbon fiber, which makes a great spring, and the catch block made of acetal.

I actually made quite a few modifications to the hinges. I removed the angular features. This also makes them easier, and less costly to machine. Mainly the main arm block. I do not feel it is necessary. I believe @Pdwhite done this to incorporate some sort of pressure angle into the hinge, which is fine, however unnecessary. That is merely speculation as to why he done it that way however.

I also redesigned the main body side of the hinges to be the same part. No need for left and right pieces here. They are fully symmetrical , and the same part which can be used in the left or right position. This also reduces cost, and eases assembly. This however also required an adjustment to the hole positions in the main body plates.

I also redesigned for round hoop tube. As I will be machining/fabricating all parts myself, this makes fabrication of the hoop much easier, less costly , and much easier to replace if needed in the future.

I also made several other minor design alterations.

I dont mean to jack your thread. Just nice to see other thinking along the same lines with the latch.

If you would like some carbon latches for that, let me know. I can cut them for you. While the plastic works, its probably not an ideal long term solution. 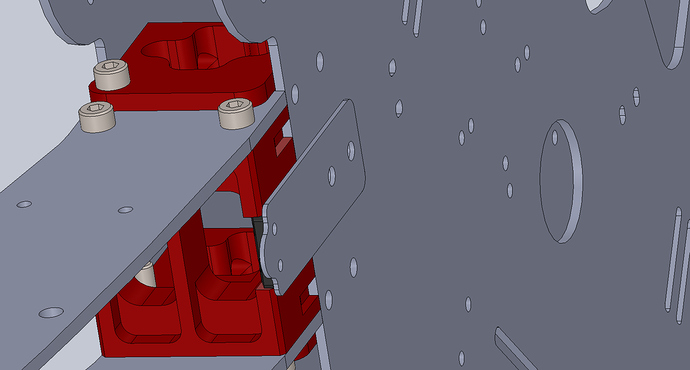 Cool idea! Are you going to share those design files @The_Wizard?

Thanks for sharing! It’s fun that we had such similar ideas! Yours is better for future builds with manufacturing costs in mind while mine was just a quick and easy modification to my current machine. Lexan (polycarbonate) is pretty strong stuff with a decent amount of flex so I think my latches will last quite a while.

Today I designed and 3D printed some stoppers for the stand hinges so that they will stop in the right position when unfolding it. 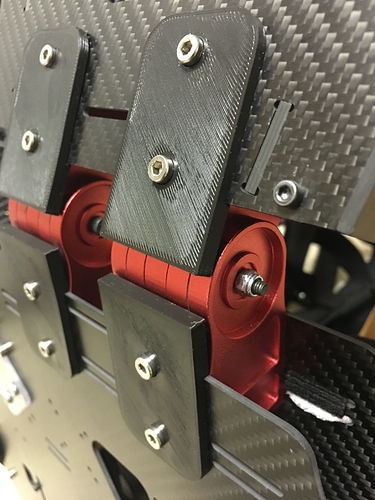 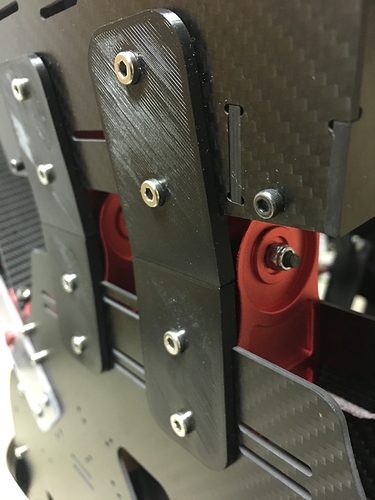 Here are the files. They are printer friendly because I added a bridging layer at the countersink transition which is easily cut away later. I printed them at 0.2mm layer height.

Ooh, I’d love those too! I’ve been considering putting pins in those hinges, my legs keep bending as well. Please post the CAD for them!

This community is simply awesome.
@GliderPilot you could add the CAD files to the Github repository

and even sell them to others, who do not have access to a 3D printer.

I added the files to the original post above.

Awesome, I’ll add those to the github. Pls send your Arm latches when you have time!

I designed some printer friendly hoop connectors. The mating portion is a little bit longer to hold the tubing better. They are printer friendly because they are printed in two pieces (same piece printed twice) making it so no support material is needed during the print. This makes the print quality better which makes them fit better. The original ones got pretty loose and weren’t staying connected good. 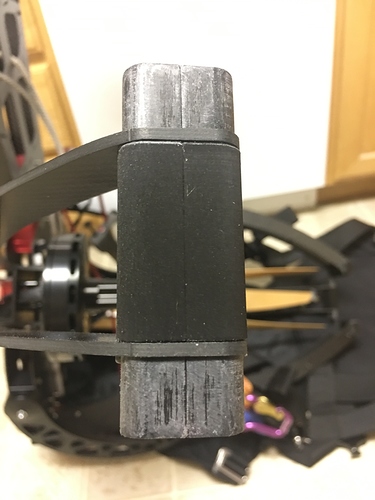 Here are the files:

Pls send your Arm latches when you have time!

I added the stl to my original post above.

Last night I did some ridge soaring on the beautiful mountain by my house! I flew for 50 minutes on a set of 4 Bonka batteries because I was able to fly without the motors running for half that time. My altitude above launch was 1400 feet. This is the very reason I bought the motor and I finally was able to do it! 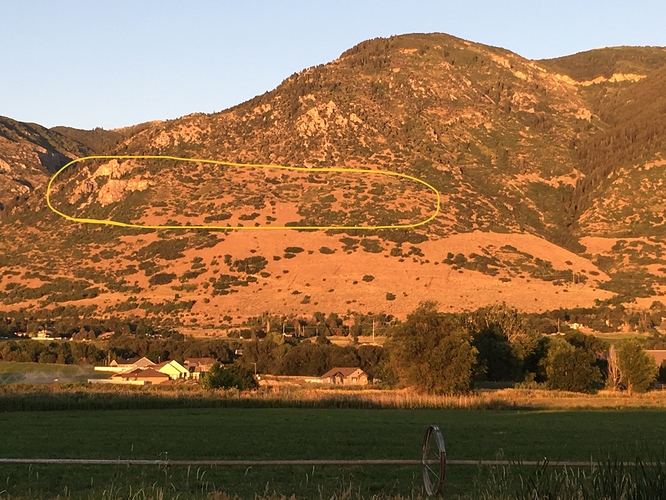 Today I replaced a couple of the standoff’s with eyebolts for the net to clip to. 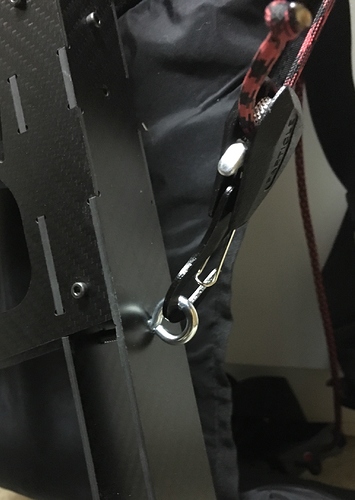 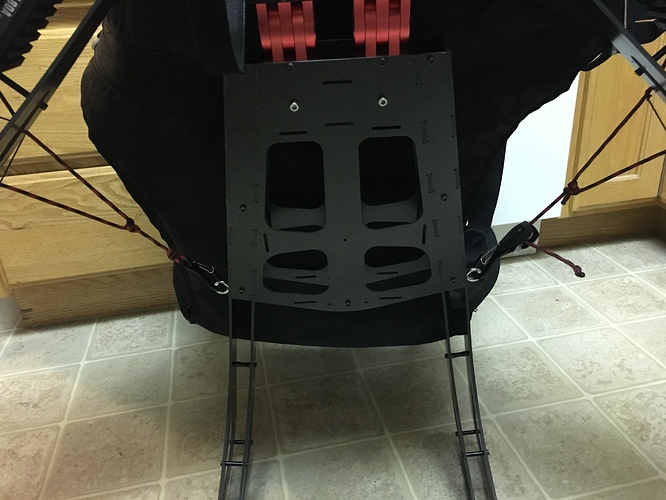 No vids yet!!!
Those eyelets are not aviation grade - wont pass in Canada!

Which got me thinking if we would need to switch all the hardware to aviation grade to meet our amateur built class up here.???
Canadians are renowned for being super polite/apologetic and safety! I think our toilet paper has a safety rating:rofl: