I don’t want to speak for Paul but I also don’t believe in not putting out info for your customers so…I did receive an email from him when I requested an update on my order status.

basically he told me it’s going to be another 30 to 50 days before the units are shipped because it’s just now leaving the factory and it’s going to be on a boat for 25 days apparently. he said he’s trying to speed up the process where he’s can but that’s where we’re at for now.

Got someone any new updates?
It’s also long time ago to here something about it.

Received Jan 30th from Paul,
“The container is shipping in the next 3 days.
So 30 days out before its delivers to us. We will then take about a week to ship out after delivery of the container.”
So basically we are looking at mid March at the earliest.
Patience is virtue, good things come to those who wait, manufacturing is hell (St. Musk).
These are good guys and deserve all our support despite shortcomings.
Peace!
Awesome

There are a couple different threads. Heres the latest

Yes please email in if anyone has questions about timeline. I try and always answer question there (especially urgent ones). The forum is not a reliable place for new product info. If its not coming from me to you then I can’t speak to the legitimacy of it. I don’t think i have ever said beyond April/May, definitely for people the pre-order folks. Now for those who haven’t pre-ordered that could be possible as it might be out of stock later. In reality it might not even make it to having units …

Update - Sounds like there is a week delay, there’s no direct tracking I can look at once it off the ship but from what I’m being told its an additional week to transfer the stuff through customs.

So the 22nd is now the expected delivery date.

Thanks for the update. Good things come to those who wait

Do you have any Updates for us?

No its been sitting waiting to be loaded onto rail for about 30 days. And the terminal that our container is in are particularly backed up. I called in and they said typically it takes 20-45days right now (because the currently backup) to be loaded onto the rail. Its very frustrating because they don’t give any updates or seem to have a queue.

I should get an email from them in the next 1-2 days.

@Pdwhite at what point should we just drive across country with a semi and grab it ourselves?

I already asked them that (oocl) a few days ago, they said you cant do it. (im sure you could figure out something but the person i talk to laugh and said hes never heard anyone do that so…

For as much transparency as i can here is the ETA of the container OOCL provided.

Tell OOCL that you’re coming to pick up the shipment and you’ll take it… personally.

Well they are about as good as Amazon with their “get it tomorrow” promises. I will use the wait time to get my paratrailer solar electrical system finished. Thank you for showing us this. I had a hell of a wait for my Skydio drone too, but it was worth it.

Any updates on the battery shipment?

Delays could be into June. 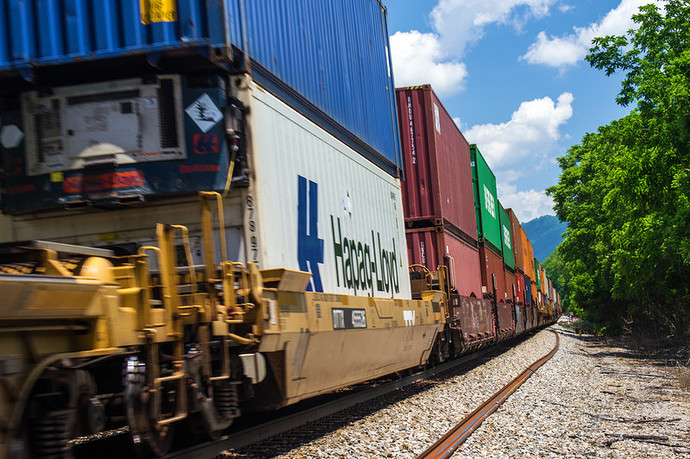 Now US intermodal rail yards clog up as port congestion and delays continue -...

US shippers and importers that rely on rail are bracing themselves for a long slog through a period of congestion and delays. Some have lost patience and shifted traffic to truck. The Los Angeles-Long Beach port complex has become synonymous with...

That is very worrying, I am wondering if switching to a truck is even possible.

Good news it’s one the train now!!! Only took 35 days to take it from the yard to move to the train.

So it should be pretty fast at the his point now. All the big hang up are past so that’s good.