Post your experience here with video if you have it.

These videos aren’t anything special. As soon as I get some reserve containers I’ll see if she can handle an infinite tumble.

On my bathroom scale, the 4kWh battery is 45 lb, and the rest is 33 lb not including a reserve. However it feels light because the battery is right against your back.

At 4700 ft take off elevation, I had a 58 minute level flight with cruise control enabled the entire time. It’s a very comfy and quiet XC machine. Much quieter than the X4. Almost put me to sleep. My glider was an EN-A loaded at 4.41 kg/m^2 flat area. This was fantastic news for me because I was only expecting around 45 minutes at my elevation.

There is no hard cutoff on the ESC, but watch out because the BMS does have a hard cut at 2.4V per cell to prevent damage to the cells. I did have a hard cut, but it was near the end of my flight when I was giving it about 10kW of power. So the sag must have caused at least one group of cells to go down to 2.4V even though my pack voltage was reading 70V. There’s also a hypothesis that my BMS has the wrong cutoff level. I think I will call 72V my lower limit, even with sag, which is a guideline I planned on following anyway. When the hard cut occurs, you have to unplug the pack to reset the BMS in order to have throttle control again. 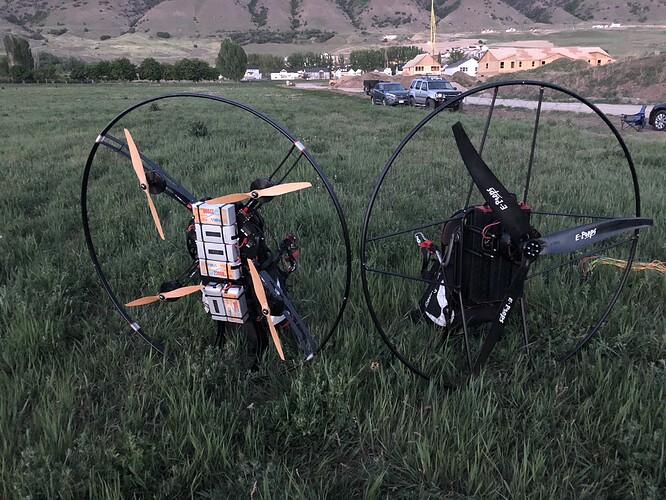 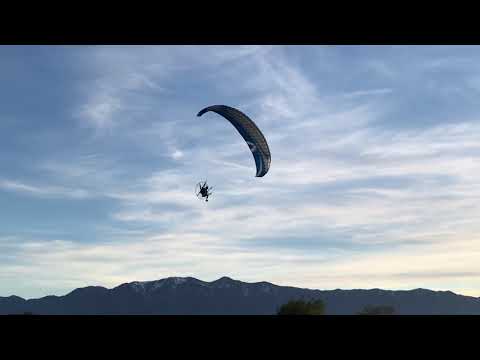 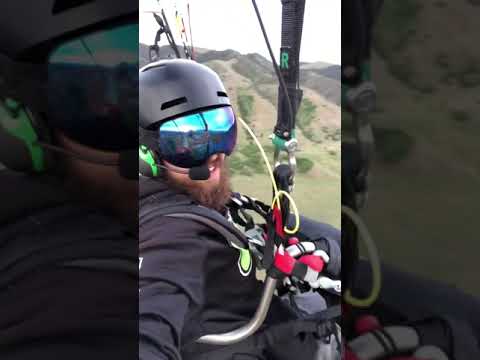 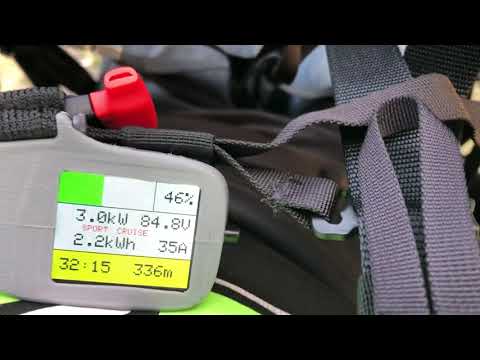 Took my SP140 for its first flight today at a local ppg school. My buddy took some pictures, not sure how long he will keep them online, but here they are: https://lightroom.adobe.com/shares/f402f5a93af84d5dbaa2c7ee2bc83c95 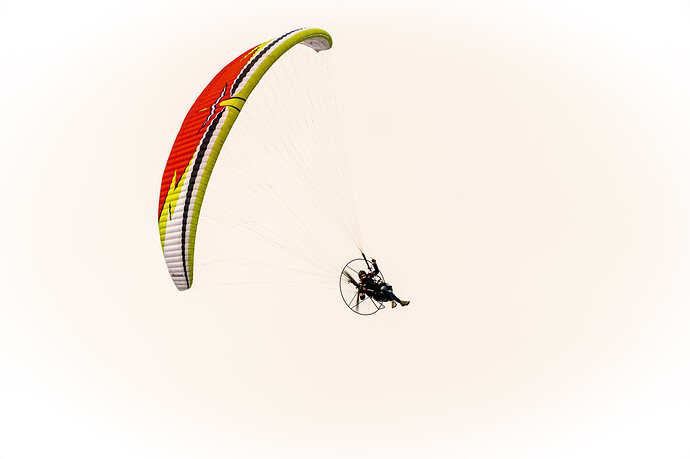 My glider is small and fast, I’ve upgraded a few months ago. Macpara Samurai 20 m (I am definitely on the heavier side on this glider). I had a 35 min flight with 35% battery left. Around 6-7 kWt for level flight. I was worried the engine is too heavy, but it was no problem taking off or landing. I guess the battery close against the back is a good thing. I was also worried the wider frame (140 cm vs. 120 that I am used to) would add to the rotational inertia but it actually felt better than the Maverick (my previous engine). Again, probably because most of the weight is very close to the center of mass.

How did you enable the cruise control? I tried pressing the button once in flight but it didn’t do anything. Didn’t try press and hold - it just occurred to me now maybe that’s it?

Cool pics, To engage cruse just hold the throttle, go to the level you would like to cruse at and then press and hold the button for 2 seconds. You can then release the throttle and button once you see and feel the yellow bar at the bottom show.

Then if you want to come off cruse you can just apply the throttle again and it will disable.

Ah thanks! Didn’t think to try that until after I got home

So cool you were able to add cruise control. Can’t wait to give it a try when I get my unit.

I would love that cruise on my Flexwing. It would be nice on the control bar but the wiring issues

. By BT for cruise maybe but physical wire to the gas pedal…sorry, foot throttle.

Just as simple to have button off to side where I plan to have a hand throttle for gas cruise control.
Great job on this design👍

Paul, what exactly does cruise control do? I tried it any number of times today but it seems to lock into climbing or descending rather than fixing the altitude. I actually tried it during my first flight right away as I was climbing and it locked into full throttle until the battery disconnected and I had to turn around and land. I was expecting it to drop the power at any moment to level out but it kept going pretty much at the same setting where I was holding it. Later during my second flight I tried it multiple times but I could never get it to hold the altitude precisely. It was always going up or down, depending I guess on whether I was going up or down (ever so slightly as I was trying to be as level as possible when engaging it). Is this how it’s supposed to work? Is there any way to make it hold the current altitude?

That’s exactly how it works. It does not hold altitude. This gives you the option to climb with cruise, which is a feature that I quite enjoy. To cruise level flight, just hold the throttle at about 4kW and hold the button down.

In order to achieve a decent altitude hold, we would need a finely tuned PID or similar control loop since altitude responds relatively slow with throttle input. That’s just the nature of a paraglider. If any control engineers out there want to implement a PID or similar, and tune it, I wouldn’t be opposed to that.

Or in other words - cruise control is constant prop speed, not necessarily constant altitude.

So… if your holding close to level with the cruise on and start pushing your speed bar or adjusting trims then you’ll start descending.

Thats right - dont worry, you’ll get the hang of this flying thing soon. And dont forget the varying wind speeds, some of it are called gusts🤣
Constant control input, for the most part!

Thanks, I was wondering what it is that is kept constant. The power level was moving around by ±0.2 or so, and the altitude was changing slowly.

I still wish it kept the altitude constant instead. It doesn’t need to be immediate dramatic adjustments, something on the order of a minute that adjusts the power level by say no more than 10% to make the altitude start changing towards the set level. You’d have to start with nearly constant altitude and it would take over. If you suddenly lose a lot of altitude (turns, wingovers, etc) it would just increase the power level by the max of 10% from where you were holding it, and eventually you’ll get back. Or if you are using cruise control to climb it would stabilize at 10% lower than were you were holding it.

Yeah don’t do that intentionally. Just don’t! You should never be maneuvering without controlling the power - hand on the throttle! I’ve never flown with an autopilot but I believe they are designed to disengage, with a warning, if there are sudden large deviations.

The cruise control on the SP140 is meant to mimick a throttle in a small airplane (without autopilot) with a fixed prop. In a light airplane you don’t hold the throttle like a car or motorcycle. You set the power. I.e. you lock the lever at a position mechanically. You also trim pitch. Generally you do not change one without controlling the other.

Since the XP140 doesn’t have a “throttle” they have programed a controller function to hold the motor/prop rpm. I suppose it might be easy to have it hold a power level instead. I don’t have one yet myself to try it so I’m not qualified to opine on that.

Holding altitude would essentially require an autopilot. I like flying myself.

Theoretically everything is in place to make a constant altitude feature with a software update. I am happy with the constant speed feature for now though.

You’d need an altimeter connected to the throttle… is that already included?

I was climbing and it locked into full throttle until the battery disconnected and I had to turn around and land.

This is pretty scary… when you moved the throttle it didn’t disengage cruise control?

The SP140 has different components on the controller than the X4 and includes a barometer thats used for altitude estimation.
We use the BMP388