i want to take a topic with all datas from all SP140 owners,…
Please keep the List kopie and pastet forward and fill in your specs.

Please NOTE: Battery FULL till complete EMPTY and your complete weight wich you have to get up in the air.

You never completely empty the battery

I think he means completely empty: with every cordless screwdriver, laptop, every tool, e car, e bike there is a limit where the system switches off or shows “empty” as the manufacturer has set it. this is also the case with every eppg.

I think making the list is a very good idea. I’ve measured about 25 wings myself over the past few years. but with other eppg.

One suggestion is to upload the flights to xcontest because you can then see the user behavior such as average speed, gain in altitude, etc. as well as the weather situation as there is a big difference between flying in the afternoon or in the evening as an example. to log the flights a mobile phone is enough if you don’t have a vario with igc.

Bratwurst, It would be really interesting to hear your findings from the different wings you’ve tried. In terms of efficiency, I would expect large free-flying wings to perform the best. I’m curious if any of the modern reflex wings can get close efficiency-wise when trimmed in.

Yoschi, interesting topic, I wonder why no-one has chimmed in yet. From what I’ve seen, the Luna 2 is not the most efficient glider. However, 25-28 min flight time sure sounds low. Is that flying with trimes in?

I wonder why no-one has chimmed in yet.

The request is for people to essentially test fly. I.e. become test pilots. To get useful data you have to fly a precise and specific flight plan and record all the variables. Repeatedly! Even if there is an “empty” shutoff point for the battery, flying until that happens is dangerous if your not an experienced test pilot or don’t have an expansive field to land in. It also reduces your recharge cycles.

The efficiency differences between wings is probably less important to most of us than other factors such as roll response, stall characteristics, inflation behavior, collapse recovery, etc.

Even if there is an “empty” shutoff point for the battery, flying until that happens is dangerous if your not an . It also reduces your recharge cycles.
[/quote]

that is not completely right. you have to differentiate between x4 or other projects with hobby lipo and “real” 1 propeller eppg with li-ion battery packs. Here the producer, if he works professionally, makes the limmits so when switching off or reducing power that the battery is never damaged. as an an example. A 36 Ah battery can only be used in the EPPG up to 30 Ah.

the reserve is deliberately chosen based on over 100 test flights beforehand in all conceivable situations.

it even goes as far as modern eppg have a system that recognizes the aging of the battery and adapts the temperature curve and drive power accordingly.

The request is for people to essentially test fly. I.e. become test pilots. To get useful data you have to fly a precise and specific flight plan and record all the variables. Repeatedly! Even if there is an “empty” shutoff point for the battery, flying until that happens is dangerous if your not an experienced test pilot or don’t have an expansive field to land in. It also reduces your recharge cycles.

Narh, I don’t quite think that’s the point. Yoschi only gets 25-28 minutes of flight-time and likely expected to get significantly more (closer to 60 minutes). The way I read it, he just wants to get a rough idea what kind of flight times people generally get with their SP140, trying to understand what causes his lower than expected flight time.

the luna 2 is very efficient if you don’t fly it with a high load. as soon as the surface load is 5.86 kg / m2, as in the example, the sinking is high and you need more motor power. the luna 2/23 is ideal for electric flight for a takeoff weight of maximum 115 kg. Basically, a flight with 4 kw / h battery and pilots with 80 kg or more is possible for a maximum of 45 minutes without thermal or slope wind. Unless you are only flying at an altitude of 50 meters, then maybe 50 minutes are possible. 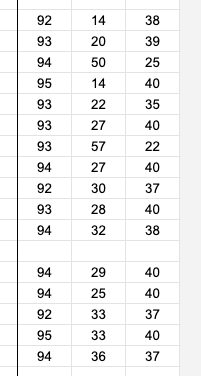 I have flown my sp140 with a full “1hr” battery on 16 different days now, from fully charged to mostly when the battery bar was in yellow/red, although I had a couple of shorter flights. When I plug it in just before the flight the percentage shows anywhere from 92-95%, never 100%. Once the bar changes to yellow you have a few minutes before it goes red. Once it’s red it’s going to shut off in a minute or so. Most of my flights are until the battery is in yellow. This can show as low as 14% in flight but once I land the percentage climbs back and settles at 27-35%. I attach a table from my log, the columns are: starting percentage, ending percentage (after it recovers after landing), and duration in minutes. I fly a higher-performance wing, which is fast and agile, and which is small for my weight, so it likely uses more battery than advertised in sp140 specs. In level flight it takes around 6 kW (so, 50% more than 4 kW number I saw somewhere). All flights in this table are with default trimmer setting and 0 speed bar.

There is a very simple way to see how much the eppg has consumed if you don’t have a precise measuring device in the display on the eppg that calculates the consumption from voltage and current.

you just look after the flight how much capacity is in the battery when charging. the small device is simply looped into the charging cable between the charger and the battery.

. only do it if you can handle electricity!

otherwise let a specialist do it. an example in the link. There are many other possibilities that I would not like to describe here but that it deviates from the topic.

the power loss during the charging process can be expected to be around 2-3 percent. the more often you measure, the closer you get to exact values.

Thats what my post is about,…
At least we have about 40-60 minutes with the echo glider.

So Iam not sure why all told me not to empty the batterie, iam a skydiver and its no problem to land when the beatterie is empty at least you have to be at your landing area?

The only time I have depleted my battery while in flight was launching at 2500 ft, climbing about 1000 ft AGL and circling waiting for my son to launch. Flew for about a half hour. On landing had longer glide than anticipated, people at the end so I aborted to circle around for a second take. With “full throttle” at that point I barely climbed, was heading for houses so turned 180 and the motor completely stopped about 50 ft AGL forcing a downwind landing at 39 min.

Since then I have ended my flights at less than 30 minutes and keep a close eye on remaining battery. In the near future I intend to climb up to above 1000 AGL and cruise around to see how long I can get the battery to last with a gentle climb and level cruising, and enough altitude for a graceful dead stick landing.

Just got my first real flight in on the SP140. Flew it to battery cutout. 43 minutes, mostly cruising with a few climbs to about 500’-700’. Cutout happened at a cruise-climb power setting of about 5kW.

Most of my cruise flight was about 4kW, so I was a little surprised to not get closer to 50 minutes or so on a 4kWh battery. I heard that 80V is a good time to call it a day, which almost certainly would’ve prevented the cutout. When I powered up again after landing, the controller showed 11%/78.1V. Lots of learning yet to do as I figure out the whole ePPG thing!

My first flight was the other day as well.

I think this is a good point. Using the cell voltage to determine state of charge in a high drain application doesn’t give a dependable experience. Again it’s OK for something like e-bike or cordless power tool, but I think the Ah-counter is more appropriate. My EV shows both voltage and Ah consumed (as a %). On a hot day, the cell voltage holds up very well… until the full capacity is used and then it falls very suddenly. Relying on voltage alone would give you no useful warning, but if I can see I’m below 20% SoC I know it’s time to find a charger.

If the ESC or BMS in the product can report current to the controller, integration of energy used could be done by a firmware change, without additional hardware needed. Maybe I try after I’ve used it a bit

New glider, new data point. Flight profile was a cruise-climb to 500’, then level flight cruise with cruise control until battery cutout. Total flight time: 55 minutes, and that’s with a suspected parasitic cell which according to the BMS app was 0.6V lower than the rest, which seemed to be the trigger for the cutout.

Was pretty happy to finally get something close to the advertised flight time.

Has anyone tracked the mileage you get during the flight?
ie MPB, miles per battery.

I guess depending on your weight and the glider you’d reach some sort of equilibrium speed for level flight and that would determine your distance. And the kW at that speed determines how long the battery lasts.

I don’t have one yet, so can’t contribute.

It would change with wind and direction of travel relative to wind. As well, temperature , altitude flying, lots of things to affect it.

This is anecdotal data, not a statistically sound survey, of course.