My goal is for the most efficient (of course), and quietest prop arrangement I can come up with while mitigating torque effect (Which I’d imagine could be particularly nasty from an electric motor if thrust isn’t attenuated). From what I’m reading, multiple smaller props don’t hit either of these criteria, though an even number of props resolves torque effect.

Two large contra-rotating props would be more efficient I believe, but are apparently fairly loud. (I’m not sure if they’re more or less loud than 4 smaller props)

I was considering one large prop, and one medium sized prop… I believe this would largely reduce the sound of the second prop from my perspective while offering some mitigation of torque effect. I expect this would have a notable efficiency draw-back unless the second prop was mounted somewhere with it’s own air supply.

Any thoughts? What have others concluded from researching prop size / number?

one larger prop is more efficient than many smaller props

since one single larger prop with an higher angle of attack can move more air, it can also rotate slower and thus is less noisy.

here’s a video about it: https://www.youtube.com/watch?v=6e4x2vj9H9U

That follows with what I was reading… here I’m wondering about a contra-rotating prop though which (I’m sure your aware) is two props spinning the opposite direction. I’ve read it’s “quite loud”, and louder than a single prop, but I don’t know how it stacks up against four smaller props. I’d expect, at the least, it would be a lower pitch, and so more pleasant… and probably somewhat quieter… but I didn’t find anything to verify that.
(It’ll take me a minute… or 20 to watch that video… looks interesting though

there are many approaches to stack two counter rotating props on top of each other, to eliminate torque.

however I haven’t seen this approach been widely used, except for maybe octocopters, where they are spaced apart at some distance.

the reason for that is probably efficiency, both props cover the same surface, the second prop also has to deal with already very turbulent air, produced by the first prop.

That was my initial assumption as well, however, online resources suggest contra-rotating props are more efficient than single props. The best explanation for this I found was from a stack exchange discussion. Not sure if his terminology was science community approved, but the point seemed pretty straight-forward to me

The extra efficiency gain is because an isolated propellor expends some energy imparting a “swirl” velocity to the air (i.e. an angular momentum), in addition to pushing it backwards (a linear momentum) to cause thrust. The second contra-rotating propellor operates opposite to the swirl direction of the first rotor, resulting in a low net-swirl and recovering the energy wasted in turning the flow while still contributing to the rearward momentum that causes thrust. – Eric Greenwood Oct 1 '15 at 18:56

Noise abatement comment from an under gifted observer of the intelligently gifted: You cannot make a prop that is quiet AND moves you, so try a noise cancelling prop combination. Active noise cancelling headphones use opposing sound waves to hide each others sound from your ears - or rather they fail to shake your tympanic membrane. You have 4 props to work with. They’re just waves in the air, so it cannot be that hard (insert backlash, and thinly vailed “you’re a simpleton” here - it’s ok, I’m a pilot and I can fly). You’re not going to be silent, but you might net less noise during constant power from a combination of differently sized or different bite of props slapping the air and causing waves. In your goal of managing the sound waves you create, size is not the only factor, you also have bite(insert juvenile giggles).

I hear that in the EU, they have muffling mufflers but most of the noise comes from the prop.
Long props on some Cessna 172s make a horrible loud sound at 2700 rpm because the tip of the prop is about to break the sound barrier.

BTW, I thought the 4 prop design was primarily for compact storage, torque, cheap props. I’m all about the compact storage. Find the comprise that fits your mission.

Noise abatement comment from an under gifted observer of the intelligently gifted: You cannot make a prop that is quiet AND moves you

Maybe get Dyson’s opinion on that – the Dyson hand-dryers are awesome !

My goal is to fly the actual quietest prop I can figure out so that my impact to those around me is less. A significant part of this post was fishing for why the design here is a 4 prop design, so your comments regarding that are greatly appreciated. None of those reasons are sufficient to deter me from seeking a quieter, more efficient solution given as a 300 lbs pilot, I expect four props would start to become rather inefficient for me.
A muffler is an interesting idea… someone posted elsewhere about a potential prop muffler (some engineers designed a circumference sound reflector)… The description there reads that the sound waves are redirected back toward their source though… which in this case, is the engine/pilot. Maybe the outgoing sound waves cancel the reflected waves, but that’s just a world of unknowns there.
Whatever design I go with, I definitely plan to make sure prop tip speed is toward the sweet spot (.6/.7 if I recall correctly)… which makes it fairly likely my solution won’t be a single prop

Looks like they primarily addressed turbulence issues. (And reduced airflow while maintaining air pressure)
I believe that’s the ultimate goal WRT prop noise… reducing turbulence… if only we could have 0 turbulence props

Of course, you can’t accelerate air without some turbulence, but I feel like we’ll be doing better and better as trying different solutions becomes more feasible for the common person.

Maybe there is a way to make the space around the props different using vibrations. This might require more energy than it’s worth at the moment. But I’m thinking along the lines of what might be possible when we have more energy to spare. I don’t know what this would be but I’m emagining something like Tesla coil that changes the space around it to muffle noise naturally. Has anyone been to the redwoods? There’s something about the air that’s different there. It’s like sound doesn’t shoot as far there.

I’d be interested to see experiments with a sound refracting hoops and paragliders… might be able to put one between the pilot and the prop for a silent flying experience, though this would likely amplify the noise for everyone behind you.

While it does feel mystical in the redwoods, I would attribute the sound muffling to the texture of the trees, the soil, and the high humidity content… each of these surfaces will scatter/diffuse sound reducing what returns to your ear. An energy sound muffling makes perfect sense though, as sound is just a form of energy… if you can neutralize the wave, it stops being sound. (well, stops being audible anyway.)
Once we can easily create a magnetic/energetic field around our paragliding props, we’ll probably be using that field to manage the fusion or ion reaction

It sure will be sweet when we have extra power to spare… it’s hard to imagine… everything we do now is to save power… but we’re actually not all that far away. (we’ve been close for decades, but now that anyone can 3d print, test, and youtube publish prototypes, megacorps can’t just sit on their patents anymore

Hi,
I have been talking with the guys at OpenPPG last week at the AUVSI Xponential conference, and this is how I found this thread. For motor and propeller data, you can look at two community generated database: https://www.miniquadtestbench.com/ and https://database.rcbenchmark.com/. The former has a lot of data. I am a designer of the latter (my company makes thrust stands). It has less data, but you will find data for larger propellers and counter-rotating propellers with motor efficiency.

There are some propellers that are a bit quieter, but unfortunately, wing load and propeller speed are the two largest contributors of sound generation. As Ljpung said, approaching the speed of sound is really noisy, regardless of the size. Larger, slower propellers will be quieter in general. The larger the prop, the higher the torque, which can significantly affect motor performance if you don’t a Kv sufficiently low.

Dr. Stephen Prior of the University of Southampton has done a lot of research on counter-rotating propellers (varying diameter, and lateral and axial offset). He published a good book and papers.

You cannot make a prop that is quiet AND moves you

This might be true for our application of powered paragliding but if your propeller was as big as a paraglider it could move you while making as much noise as a paraglider. Not feasible obviously but I’m using extremes to illustrate a point. An extremely large prop spinning really slow would be very quiet.

Also, there are people working on ornithopter concepts (flapping wings). Not only would they be silent but super efficient if done properly. Much more complex but the future will be interesting.

http://www.ehang.com/ehang184/index
This already exists and will be build in austria whhere i come from

Here you have the tone - much more quiet than our system and able to transport 2 people 20 minutes on 1nbattery.

Another start in vienna

Where did you find that, and was there any decibel rating information? I can get an idea of pitch from a youtube video, but not volume… but they do seem to have kept from reaching the annoying high pitch by going with a ton of blades so blade speed sounds pretty low which would definitely help with volume… contra rotating blades FTW

I didn’t see or read of any muffling technology they’re using though. 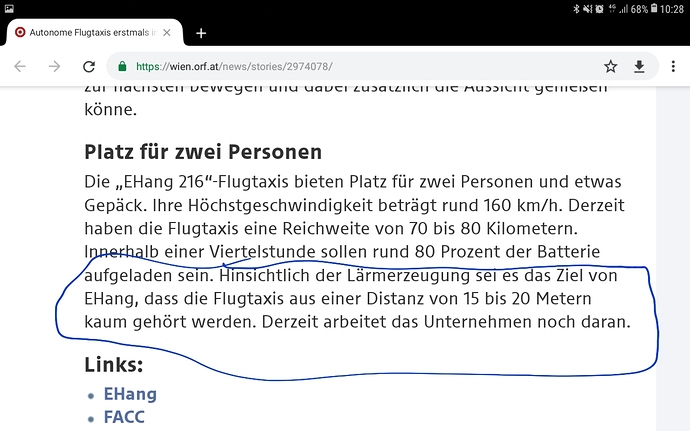 Goal is not to hear ot in 20 meters

Those are a fair size prop so the tone will be deeper.
Cheers

I really can’t wait to have all those “air taxis” in the air, supposedly letting all the (rich) people commute to and from work, or from airports to the city and back…

no more paragliding for us then.

Check out the (german) Volocopter, if you like the (chinese) Ehang:

they started their journey with a gymnastics ball:

Dont think that they will effect our sport

As they will not fly in thermal or upwindspots that we like or if they do why should they be a problem for us,

I sometimes share the same spot with sail or motorsailplanes or hybrids of delta and sailplanes.

We have awesome tech coming down the pipeline, and I don’t think the air taxies will just be for the rich as energy storage tech improves, and they certainly won’t deter me from paragliding

(Regulations may adjust as air traffic increases, but I don’t see ultralites being banished at any point)

WRT the silence of the air taxi, their goal is to be quiet (not silent or unheard) from 15-20m away… that’s 60ft, and is a distance far enough that I’d have to hear what “barely hear” means to them to consider it notably impressive. Also, they have not yet been able to achieve that goal according to the web site.

(Translated) EHang’s goal is to barely hear the taxis from a distance of 15 to 20 meters. Currently the company is still working on it.