Since I’m excitedly waiting for batch3 to arrive there are some questions in my head.

I’m flying an Advance Sigma 8 EN C Wing, which is fantastic for free flight. (me +12 years
XC flying experience in in the Swiss Alps) But I’m new to PPG, so my question:
Do I really need a new wing? I would be ~15% over top of the weight range on my Sigma, which I think should be good for handling (would only use the engine to get into the 1st thermal anyways). Or do I need a bigger wing which is made for PPG usage
(with trimmers etc) or even a reflex wing?
Is somebody of you using your normal wing, any experiences?

Hey C.W.,
You should first check with the Swiss laws about PPG - electic PPG may be ok. https://www.englishforum.ch/sports-fitness-beauty-wellness/275986-paramotor.html As for your wing, I would be cautious as a new PPG pilot even if you have a long experience PG XC. PPG is not exactly the same. All PG wings can basically be flown with an engine, but there is a difference between landing with a smile on your face and a wet t-shirt from cold sweat running down the back of your neck after a flight you did not enjoy. You want a bullet proof glider with a lower aspect ratio for peace of mind. The attachment points risers/frame (PPG) are not the same as risers/harness (PG). Your glider may not react the same way you are used to anymore. As for the all up weight, considering that you probably live higher over sea level and you would add 50lbs or so with two 4 Bonka at 6lbs each + harness and frame to your own weight; your will likely be flying like a rocket (density altitude) with a total hooking weight over the factory maximum recommended numbers. A full reflex glider will not be as efficient in thermals as your Sigma - they are not designed for that. The ground speed with some reflex gliders can be impressive and to be aware of. Here is a pilot with an ITV Billy, one of the fastest out there without overloading the glider while staying withing the normal glider size for the pilot’s weight https://www.youtube.com/watch?v=s-MavAExqP8
I would suggest you stepping down to a dual purpose PG/PPG glider certified in both categories. Here’s a dual purpose semi-reflex glider EN-A / DGAC glider and as you will see, it is pretty lively in expert hands https://www.youtube.com/watch?v=3Jf_oFoF4bU
I hope that helped. Happy holidays!

Hi Voltair,
thanks for your advice!
for hook weight I’ve seen just this (follow also the comments):


would have never believed that this is possible, hahaha

BTW Yes, here in CH we are not allowed to fly PPG or other motorized ultralights,
except for electric ones. In regards to the forum link, Switzerland is just perfect for flying. But sometimes one wants to go after work when there are thermals but
too late to drive/hike a mountain, so a lift directly into the last thermals of the day
would be wonderful, I guess;)

You watched one of the Super Dell’s videos, hahaha… https://www.deseretnews.com/article/865626175/Super-Dell-Schanze-pleads-guilty.html Yes, you can fly a SF wings or smaller with a motor but they are the exception to the rule. We use them motorized as well but not to catch thermals (18m2).
Here’s a nice PPG video with a smaller full reflex wing (not a SF glider) https://www.youtube.com/watch?v=zLb_I1J6Jo8&feature=youtu.be The toggles on a full reflex glider have a different line layout with two handles on each side with two lines - one being a tip line, because generally full reflex turn like a flying plank by design - there is always a compromise to make somewhere.

The Skywalk Mescal 4 is an A wing made for soaring that has a motor rating but the low end motor weight starts where the top end freeflight weight ends. Why do you think that is? Any wing is more active when more heavily loaded. I assume it’s to help the wing not lag back as far when being pushed with the motor.

I fly a Skywalk Tequila 4 which is a low end B wing. I love it for soaring but it feels really active with the motor with which I am 10 to 15 pounds over the high end weight range. I’ve considered getting the next size up of the same wing. What are your thought?

I know it is confusing to many people who do not understand how that can be. I will use ITV again as an example because I am familiar with their glider line, but it applies to other brands as well. If you look at their chart and the Jedi2 for instance, a mid-range EN-B and DGAC certified. There is absolutely no profile difference between the EN and DGAC versions but yet, it is a great glider in thermals and the same with PPG. Choose for example the size M between and notice a 30kg max recommended PPG weight over the PG max recommended weight. The thing is that there is another buffer zone the glider can take before it enters the red zone and structural failure. To say that in PG mode, there is not much to fear when that is concerned. This is the reason why I have seen 200lbs pilots flying big gas engines under an ITV 18m3 (Bip Bip18) or even 26 m2. That is good news and proof of the structural integrity under load our toys can have nowadays. I fly the Jedi2 as my personal glider. I used to fly comp wings years back, then went down to EN-C and now am perfectly happy with EN-B and often fly EN-A:)
The only difference between the Jedi2 certified EN and the Jedi2 certified DGAC is the addition of a riser set with built-in trimmers. When going through the DGAC with the trimmers it will have to pass certain requirements specific to PPG to become certified. 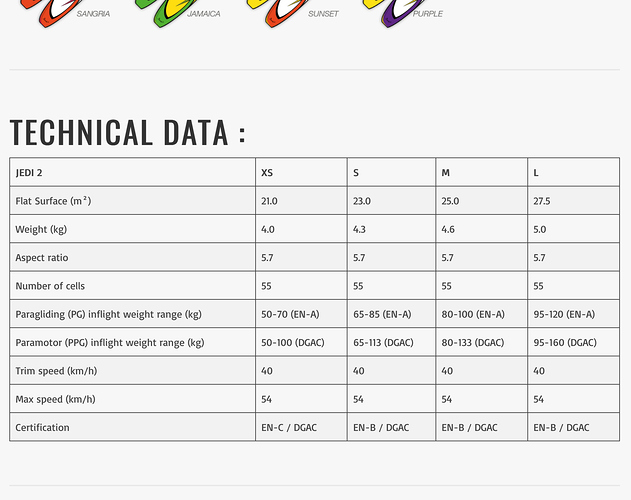 Screen Shot 2018-12-26 at 7.48.54 PM.jpg1830×1448 221 KB
If you take a look at this video, you will notice that I am flying my Jedi2 with the removal ITV “Power-Kit” still connected to my risers https://www.youtube.com/watch?v=nBrXkIYbtLU . I was just lazy and did not feel like removing it (takes 5 mn to do ). Now, look at the same wing under power with a different pilot and note that he removed the “Power-Kit” - I paraglide with the Power-Kit and he Paramotors without it, hahaha… https://www.youtube.com/watch?v=ZPodcqd1gx4 The glider flies just the same on one aspect but will not when in PG mode because of the riser connections to the PG harness or PPG frame. A good pilot will quickly adapt to the difference between the two modes https://www.youtube.com/watch?v=ZPodcqd1gx4
Now, to go back to your wing, I would recommend getting a size up for the simple reason that you increased the “All up weight” with your OpenPPG thus making your glider more reactive. There always are compromises to make if you want to have your cake and eat it too.
Same all up weight:
Small glider:
Pros:

Will loose more altitude during a collapse.

#Will require very quick precise glider control if something goes wonky on you.

Will come in faster for landings especially at higher altitudes and will demand special attention to burn the glider’s energy (acceleration hands/toggle at trim speed before smoothly flaring).

Easier to launch at sea level or at higher elevations

Easier to soar with in thermals, dynamic or thermal/dynamic conditions.

Easier to land with a larger surface area.

Will loose less altitude during a collapse.

Will have a smoother reopening.

Will be more forgiving in general.

Will get away with shorter runways.

Will be harder to get down if caught in a thermal without inducing a descent maneuver (Ears, Ears and Speed-bar together, spiral, B-stall).

One of my students, started his P2 (Beginner) training in Utah at 4000’ ASL. He was impatient and wanted to get his gear asap, so they sold him a size L (large) for his all up weight. Great! The problem was that he lives here at sea level, and one day when I was not around to keep an eye on him, he went to our local cliff site and tookeoff. To make the story short, he could not come down when the wind speed pocked-up. He had no speed-bar connected which would not have made a difference because he did not yet know how to use one. He was stuck up there and struggling over the water. He finally made it but almost crashed into a bulkhead on the beach at the base of the cliffs. I became aware of it the next day and saw the photos some of my certified students had taken and knew better than taking off when there were white caps on the water. I later told the guy about ignorance and bad decision making could hve resulted in a lousy ending. Told him to get rid of his glider and buy one size down which he did and now he is happy as a clam - he took this short video of one of his flights https://www.youtube.com/watch?v=MzuflDWjGHs
I hope it helped.

Could you post names / brands of your current glider?

Today I’ve had a look at Ozone PPG glider.
For free flight they are not my flavor but seems worth a try.

I use the ITV Boxer2 for my students - it is a certified dual purpose glider https://www.youtube.com/watch?v=9od1UyrooIU
My personal wings: ITV Jedi2 and the full reflex ITV Billy

Harnesses:
PG:
For the school: SUPAIR Radical 2 and 3 AirBag/BackPack - ACCESS BACK
My personal harness for:
PG: Radical 2 - I do not use seat-plate harnesses anymore as I am 100% comfortable with the Split-Leg models in any environment and wing.
PPG: SUPAIR “EVO PPG” for the OpenPPG 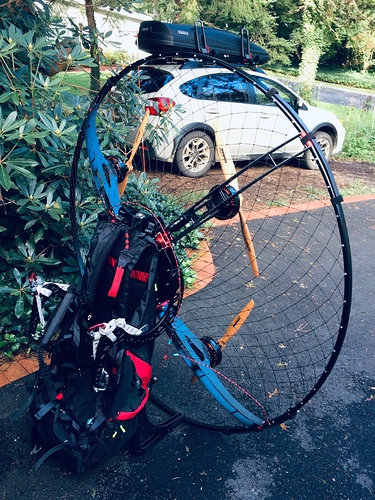 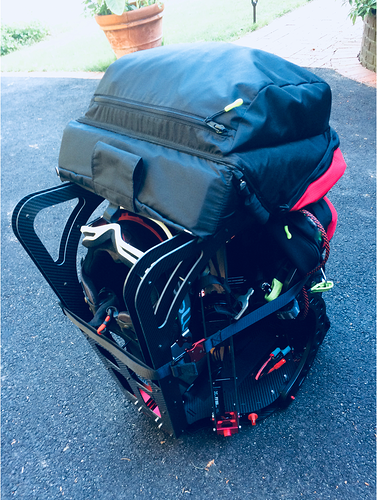 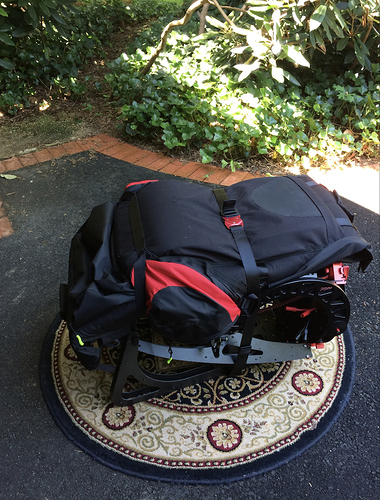 Hi, I just have read this pdf article in that thread:

How can he get 55 minutes of flight time? Power System

How can this guy get 55 minutes of flight time with a 72 amp hour battery. Video claims is realtime, with 55 minutes from takeoff to landing. And we cannot even get 30 minutes with 4 bonkas, which equals to 88 amp hour battery? Granted, he is a skinny guy (67kg=148lbs) But still. Something does not add up here. Any thoughts?


In the PDF they say that reflex wings are not really suitabe for E-flight so they
fly an 120kg Mantra free flight wing (competition paraglider).
I any one of you flying with a free flight wing?
dzubot February 6, 2019, 10:55pm #10

I will be flying with nova ion 4 it has two weight ranges. Max 130kg for paramotor or max 95kg free flight. Waiting for my kit. I’ll post once I’m flying how it works