Info from YouTube vid:
“This is the Adventure eflyer Electric Paramotor from Discover Powered Paragliding and flyppg.com in this video we show all features, start up procedure, and flying the eflyer on the Adventure Nano trike and 23m MacPara Colorado with a 180lb pilot at 800’ asl. We are getting right at 1 hour flight time on this set up and takes approximately 2-3 hours to charge. For more info please contact us at info@flyppg.com eflyer pricing starts at $15,995 in the Adventure Pluma Chassis” 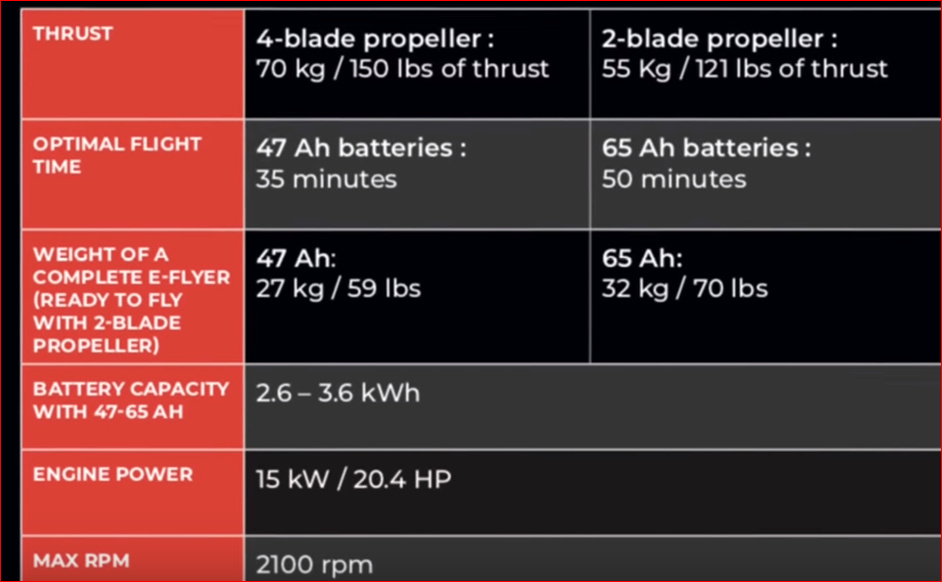 Yikes that thing is heavy! And expensive!
Comparable to the Black Hawk AMP http://blackhawkparamotor.com/paramotors/blackhawk-amp-paramotor/

I researched other electric ppg’s…
Mostly they use this motor:

Some manufacturer run it with 14S and some with 15S batteries… They are
basically 15KW motor’s which can be used for short time with 18KW.

The OpenPPG with 4 motors with full batteries has 18.8KW!

Interesting that Exomo says they have 150 lbs thrust with a 4 blade prop, but then say they can only support a 85kg pilot. That is because they can only go full throttle for a short time and can not use this power for a long time. With a two blade prop they have only 110 lbs of trust and support only pilots up to 70 kg. If you watch the video you can hear how noisy a 4 blade prop is.

From data I read from the Paracell eppg it needs on average 100 A for pilots over 85 kg and
90 A for lighter pilots. In climbing mode they use around 14000 watts, which is
like the OpenPPG. At cruise speed they are between 4400 and 5200 watts, which is much better
than the current OpenPPG.

Not a huge difference to a one prop electric PPG.

Comparison with our tip speeds: 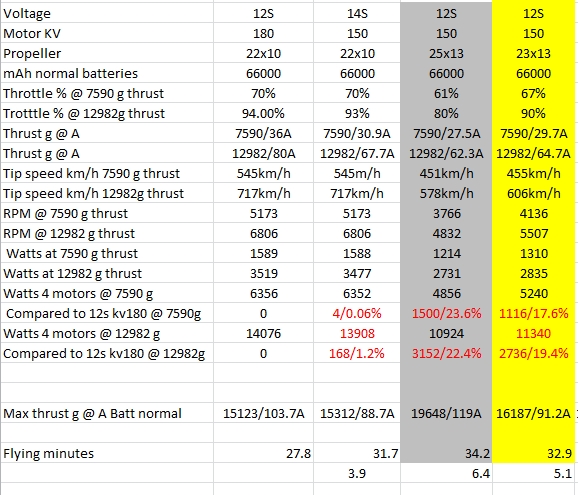 Since the noise pollution is mainly from tip speed I am not so sure why people think
a one prop setup is less noisy than a 4 motor setup. Every prop over 600 km/h tip speed
is noisy.

If you wonder why there estimated flight times are huge…
They use big battery packs!

Yikes that thing is heavy ! And expensive!
Comparable to the Black Hawk AMP http://blackhawkparamotor.com/paramotors/blackhawk-amp-paramotor/

No, its not heavy… the weight is with battery! Expensive, yes.
The Black Hawk AMP has a 10 KW motor - lol… should be good for pilots under 70kg!

16k, hahaha! You can get two OpenPPG for that price😉

You can get two OpenPPG for that price

the weight is with battery

I guess it compares to an OpenPPG with 6 or 8 Bonkas.

Not sure to understand your question? 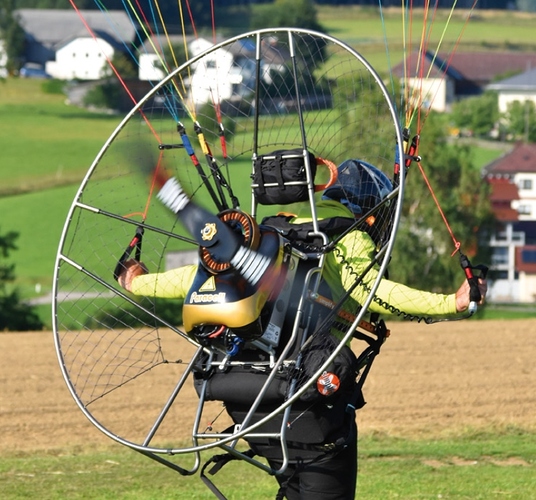 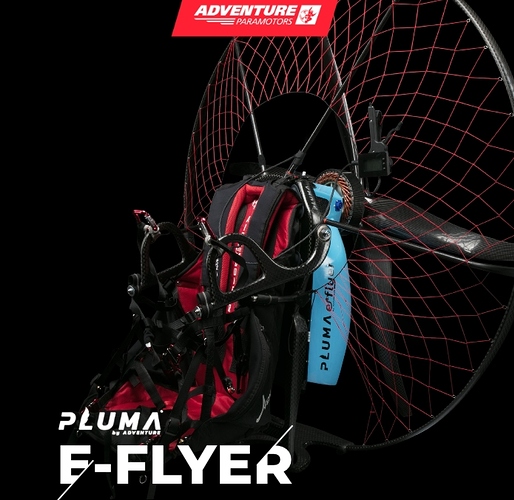 I know ADVENTURE, the owner is a friend I used to be a dealer. My school is still listed on the SIMPLIFY website but I do not represent them anymore.
I still do not understand your question. My electric machine with 4 motors is an OpenPPG (batch2). Are you asking if I can fly it without the batteries? What would be the point of doing that? I fly with 2 or 4 Bonka packs depending on the type of flying I will do on any specific day (wind speed). I am not interested in powered flight only. The OpenPPG is just a means to an end to reach dynamic lift and continue without power. In my case it takes about 15 to 20 seconds after taking off from the ground to hook the elevator at the top of the ridge. Another advantage of the OpenPPG is that it enables me to cross gaps impossible to fly over without power before reaching the lift again on the other side and continue in PG mode.
Here’s is a 2 Bonka flight https://www.youtube.com/watch?v=9od1UyrooIU&t=86s

Not sure to understand your question?

Sorry it was rhetorical. Withdrawn.

This guy is flying with the REX 30 motor as well and a 3-blade prop… 85kg pilot / 26m2 Dudek Universal.
Great that he embedded the metrics into this video!
He is flying very low and needs over 5000 watt for level flying and 10000 watt for launching…

The best number I saw was with the Simplify Paracell / Pilot under 80kg
and two blade prop they avg. 4662 watts…

Theoretically the OpenPPG KV150 12S with 27x13 prop’s could average as well 4660 watts.
The problem is that the cage is already 150cm and would be too small! This would need mayor modifications and i am not sure if it is worth…

It’s probably also worth noting that this is clearly cold weather figures, there’s snow on the ground. Cold air is denser than warm air which will improve the performance of both the wing and the propeller.

…and reduce the performance of the batteries somewhat?

It will only reduce battery performance if you start with them cold… like when I left them in my car all day before a winter flight. During use they naturally stay warm.

I wasn’t referring to the batteries being cold. I am talking about wing and propeller efficiencies. When the air temperature is low the air is generally denser than when the air is warm. We know this, that’s why thermals go up! We also know that the action of the moving atmospheric gasses on the airfoil shape of the wing is how our paragliders produce lift. If those atmospheric gasses are ‘thicker’ ie. there are more molecules of gas in each cubic centimetre, more molecules of gas acting on the wing surface, then a bit more lift is produced at the same airspeed. Same goes for the propellers. If you’ve got a small local ridge that you’ve dynamically flown for years you’ve possibly noticed that in the winter altitudes above TO are a bit better than in summer at the same windspeed. At the moment I’m doing a lot of gyroplane flying (which may be why I can’t justify spending out on an OpenPPG to the missus) here in Australia. In winter the air temperature is around 10C and I can easily fly with a 120kg passenger. In Summer at 35C I’d be reluctant to carry over 90kg because my climb rate would be so poor. Though part of that is also that the motors power output will also drop because the less dense air results in less oxygen molecules in each piston stoke and therefore less explosive power… at least that’s something that won’t happen to your electric motors!

left them in my car all day before a winter flight

I’ve experienced this with model airplanes. A battery that normally powers the plane quite adequately in the summer has barely enough output to get it airborne (just enough to crash into a fence) when the temps are close to freezing. But the small model batteries chill pretty quickly. We learned to keep them in our pockets. 22amp-hour 6 cell Bonkas are a bit big for that.

Since I live in a pretty cold climate I plan to make a sleeve for my lithium ion pack to insulate it in the winter. If you keep pack warm just before flight and have it insulated it stay warm during use and shouldn’t have much loss in energy. I don’t plan to fly in -30c but maybe down to -10