The three main expensive parts of an eppg are the motor, the esc, and the batteries. I’ve seen many threads about the batteries, and some homemade motors even, but not as much about the ESC.

I saw somewhere that the ESC for the SP140 is around $1000. I’m wondering why the ESC needs to be so expensive?

I started watching youtube videos about how to make an ESC. Very interesting stuff. If anyone is interested, I found the “Electronoobs” youtube series on making progressively more advanced ESCs really informative.

The OpenPPG ESC seems to be in another class though. Much larger and more expensive, and with much bigger heatsink.

So my question is, what makes high power ESCs so difficult and expensive to make? Is it finding MOSFETs with high enough ratings? Is it about staying efficient enough and with sufficient cooling enough to not overheat? Or is the challenge in the fine tuning of the software/hardware to get smooth motor performance?

I would be happy to buy a lower cost alternative if preforms well and is reliable. For example the ceramic capacitors for one esc is around $300 alone.

Finding lower cost component would be great if you think you know of something that is comparable drop it here.

As for the battery’s they are up there to but without going to b grade cells or changing to a lower energy density cell then is hard to get the cost lower. Again if anyone can find a battery setup around similar specs of our current one ill be happy to buy that. Just don’t think anything out there has a similar weight, size and cost, not really even close. Last time i looked a 4kw 24s battery even without a case was around 3-4k

I hope you don’t mind me asking, but roughly how much money are you spending for just the cells on the SP140?

It sort of applies to this topic, but I was also wondering what BMS people are using for their 15s and 24s systems. I feel like I can fairly easily find all the other components such as motors, ESC’s, and others, but the only BMS systems I am finding are coming from some obscure company out of China.

Thanks for the reply, that’s interesting that the components alone are that costly. I started reading on APD’s website and found this cool 3d model of a similar ESC. You can hide the case to see inside. 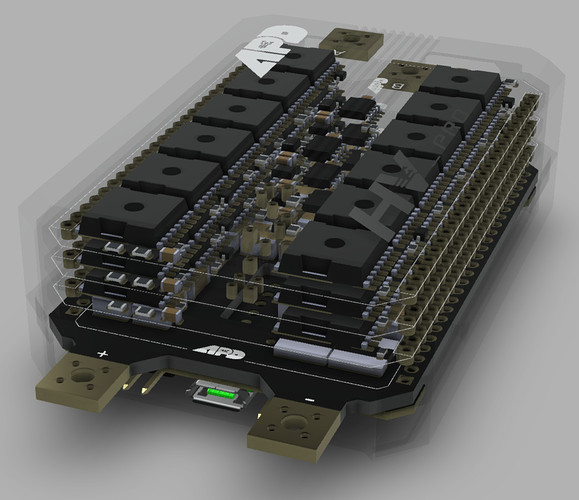 Looks like 36 MOSFET’s, and a probably some beefy capacitors. High power MOSFET’s can cost $10-$30 each on mouser. Adds up pretty quick.

It’s interesting that for the X4, it’s cheaper to buy 4 smaller ESCs than one large one with similar power. The cost scales super-linearly. I wonder if there’s a way to use more, but smaller, MOSFETs to make a cheaper high power ESC. Like using 72 MOSFETs instead of 36?

here is an example bms including all tests built into batteries in germany. 146693341_215092133678143_1556317350985213900_o|656x500
bob, if you want to find something at bms you have to go for quality. search in areas that work with quality like. aerospace equipment supplier. e.g. Rescue helicopters, medical technik, emergency units from the rescue service, the military, research institutes, high-performance sports equipment such as e motocross, e-foil, e -surfboards etc. Quality cannot be found through price tags. but by where it is used.

The problem with the ESC is that the failure modes are spontaneous and difficult to predict. They are managing a ton of power in a little package and whenever anything gets the teensiest bit out of sync-- like on the order of microseconds-- the entire system blows up quite dramatically. Fire and brimstone and all that.

Contrast this to many other overstressed systems, where there are warnings before they give up their ghosts. An I-beam creaks before it fails, a driveshaft shows fatigue wear, a tire’s sidewall develops cracks, bearings get crunchy, fabric starts to have small tears, etc…

An ESC looks like it’s having the best day of its life, and then without any kind of warning blows up. Currently, there really is no way to test for when an ESC is getting worn out and should be pulled out of service and replaced. You just run them until they die.

And if the ESC dying means that people might suffer a similar fate, then as a manufacturer your only viable strategy is to buy the best of the best so that you know your safety factor is so robust that the ESC can handle anything you throw at it. Especially time, because all these analog devices degrade with age, which subtly upsets the delicate balance I mentioned above.

So APD, MGM, Kelly, Sevcon, Geiger, etc could absolutely make the same ESCs with the same firmware and just use consumer grade capacitors, FETs, resistors, etc… Their ESCs would certainly work straight out of the box, and will probably even work for a little while. Could be seconds, minutes, days, or longer. Who’s willing to take that chance?

There’s a ton of room for fault detection to gracefully detect and manage imminent failures, but that’s a subject of university-level research and development. AFAICT, you don’t see that in consumer-grade ESCs (although who knows what Tesla and other car manufacturers are doing with their billions?)

It’s interesting that for the X4, it’s cheaper to buy 4 smaller ESCs than one large one with similar power. The cost scales super-linearly. I wonder if there’s a way to use more, but smaller, MOSFETs to make a cheaper high power ESC. Like using 72 MOSFETs instead of 36?

This is exactly what APD has done with their 36 MOSFETs to switch only 3 phases. Imagine how expensive a single MOSFET must have been that the most cost effective way was to solder 36 of them!

Suddenly I’m quite glad I’m running with four ESCs instead of one. For any aviation application I’m thinking it’d be very wise to run at least two ESCs. Can they be paralleled to a single motor? Or would the optimum design be twin contra-rotating motors.

For any aviation application I’m thinking it’d be very wise to run at least two ESCs. Can they be paralleled to a single motor? Or would the optimum design be twin contra-rotating motors.

I think that multiple ESCs is a very wise choice, if that’s available. Practically, there aren’t many controllers which can be placed in parallel, as you wind up with the Byzantine Generals problem. Geiger offers master/slave controllers, and I don’t know how they solve the problem of arbitrating a disagreement between controllers. (Understand that a disagreement happens on the microseconds level, and because of inductive load it’s not okay to simply shut down in the event of a disagreement. Very thorny problem.)

The approach I took with a self-launching glider system I designed was to have two wholly independent systems. Two battery packs feeding two ESCs running two motors. The powerplants only joined together at the propeller shaft. This gave full redundancy, in the sense that a failure of one was likely to lead to a 50% power reduction, as opposed to a 100% power loss. Of course, this has its own complexities because you no longer have direct drive in a compact package, and in my case I’ve got belts and pulleys to deal with.

Every now and then a motor manufacturer plays around with having a 2 x 3 phase motor-- which is like paralleling the systems only without the Byzantine Generals Problem–, but it seems there are pragmatic issues which limit applicability. I have no personal experience with this kind of motor, but I hear there are efficiency problems which arise, perhaps because the sensorless control suffers when the system is too noisy.

Easiest approach is just to throw money at the components. After all, the money does buy a better, more efficient system, so it’s not like the money is being spent only on giving us the warm-fuzzies.

dear people. Do not be unsettled by people who do not actively fly eppg themselves. if you have any questions about geiger, hacker, mgm, rotex etc. ask the people who have worked with it many years ago driektly in the companis and people they fly and work in testruns with the produkts. then you get real information and everything you want to know. e.g. also via redundant systems of 2 circuit motors and 2 esc. very easily.

Hello, ONEmotor (my own project) 2800rpm 15Kw continue power 4.5Kg integrate in the back of the motor 80V400A continue controller, also this VESC based motor controller can be used for any BLDC motors. For info mail to info@onemotor.ldt web site is in building progress

Hi would like to find out more info on your VESC based controller but the Email link does nit seem to be correct ? Cheers

Thanks for the reply, that’s interesting that the components alone are that costly. I started reading on APD’s website and found this cool 3d model of a similar ESC. You can hide the case to see inside.

I was able to find this. It is the APD UHV 28s 300A esc. It is different from the one pictured on the website as it has a much larger heat sink with a more rugged design so I am wondering if this could be the modified version for the the SP140. 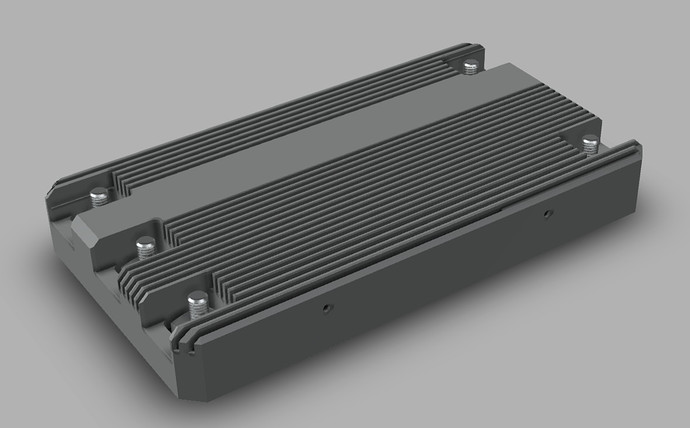 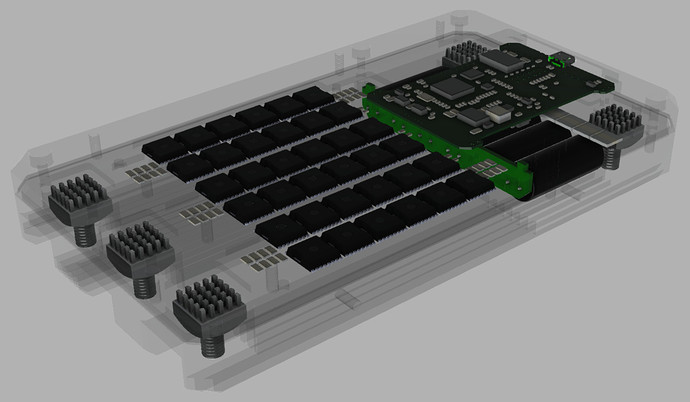 The ONEmotor and the VESC look cool. They seem small for what they are rated at though? Where’s the stacks of MOSFETs? 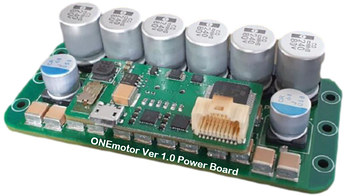 Hello, ONEmotor is staked on 36MOS , the pics show the 18MOS version, a.s.a.p. I will post some pics

ONEmotor vesc is made by 5 small size pcb boards (3 phase board with 12MOS each, capacitor pcb and ligic board) , 1st prototype still on testing . Pcb size is 50mm x 65mm
1st pics show final layout of pcb’s rhe other the prototype on test.

here for everyone who wants to see what mgm industrial is doing. esc for eppg are also available. however, the focus is on much larger applications.mgm also has a department for rc model esc. the esc for eppg has been around since 2011on market . i have been flying it myself since 2012. i also fly other brands at eppg such as pure sinus esc at the moment.

Innovation, experience, outstanding parameters, original solutions, grasp on the detail, individual approach. All of this, coming with MGM COMPRO.

as an example, an operating manual for an rc model esc version of mgm. in the industrial hbc series, the use of emergency stops and single cell monitoring is supplemented.
http://downloads.mgm-controllers.com/x2-series-250-400-mz-b15_111113-f-eng1.pdf