I’ve successfully flown a friend’s batch 1 (I think) X4 and have been making some of the cool modifications to it (would link to paul-b-braedin-b-gliderpilot-glydrfreak-flights-build-modifications post, but I’m only allowed 2 links). Just recently, I noticed that there seems to be some debris in the lower pilot-left motor – see pictures and videos here. On the 0:35 video, turn sound way up and listen for the “clink” sounds. Later in that video, you can see/hear the rotor bind and then suddenly release. The most recent thing I did with the X4 prior to noticing this issue was run the motors very lightly and briefly in the other 0:14 video – I then walked it inside to the place where it’s been since.

Any suggestions on how to troubleshoot this? I’m concerned about damaging the motor even though it seemed to spin under power without a noticeable issue the last time I tried that (0:14 video).

I blew some compressed air into most of the holes and that didn’t seem to have an effect. It seems like I should take off the rotor to see if a small rock falls out, but I’m not sure how to do that and whether that’s ok. Does anyone know if that’s ok, or whether I might hurt the motor simply trying to disassemble it? If disassembly is ok, do I just remove those three black allen-head machine screws on the back center of the motor (they seem really tight!). Or, does anyone think the problem might be something other than debris (bad bearing, dislodged magnet, etc)? This X4 has very low motor-spinning time – certainly well under an hour.

It does sound like a grain of sand. Usually compressed air will get that out. Did you spin the motor while blowing air into it? I’ve taken mine apart before. It’s really hard to overcome the magnetic pull to get it apart. Here are some pictures of it apart which may or may not help: 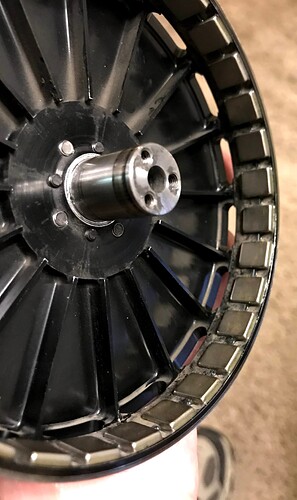 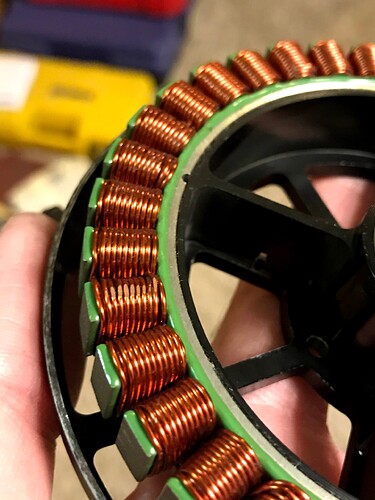 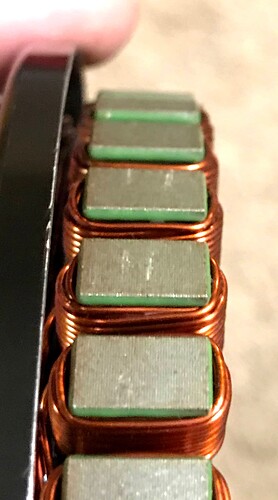 I have shot a bunch of compressed air in, but not 100% sure I’m directing it to the right place. The debris still seems to be there, though it does seem to move around, so maybe that suggests magnetic debris.

I’m in the process of disassembling the motor and it’s great to see someone’s done it before! After removing the two caps (front and back), I was planning on using a gear puller to separate the rotor from the stator – did you do it with something less drastic?. It looks like you left the cap on the stator (I see the bottoms of the 4 screws in the first picture) – seems like I should do that too?

Did your insulation get scraped off from that winding in the second picture?

I’m honored to get your response; I’ve been doing a bunch of your mods as this is a batch 1 I think, and the mods are awesome – thanks for documenting them all!

I used the prop standoff to help grip it and just pulled it by hand. Not sure what caused the scrape but it looks like it scraped during use. It hasn’t caused any problems. If it shorts it will cause problems though. I did find a short in that motor (not in the coils though). I was able to coat the shorted wire conformal coating and haven’t had issues since. The reason I took it apart was to replace the bearings but the problem ended up being the short in one phase. The short caused it to cog while turning it by hand which made it feel like bad bearings.

I’m glad you like my mods. It’s fun to see people use them.

Just to close this out, I ended up making a custom gear puller to gently separate the rotor from the stator (pictures in album linked in OP). After removal, I found some <1mm red specs of something plus a tiny metal sliver (pictured on top of a penny). I used some silly putty to clean the rotor and stator then reassembled them (they self-reassemble violently!). After reassembly, the noise was still present so I disassembled them again and put some really thin tape around the permanent magnets of the rotor to see if I could see where scraping was occurring. After another violent self-reassembly (also shown in album), the noise was gone. I disassembled again, removed the tape, reassembled, and the noise stayed gone.

So, I don’t know what the issue was, but it seems to be gone now.