Is the 7s battery bigger in size than the 6s?

Because they are both 22000 mah the cells are the same. So, yes they will be bigger packs and hold more capacity (watt hours).

Anyone know if 7s is still fine to use for batch 4? I ask because the feature said 7s was supported by default with the new BMS which ended up not shipping with batch 4. So is there something special that needs to be done to support 7s now?

That may have just been referring to the BMS default. Batch 4 is intended to use 14S (2 7-cell packs) and works great with it. I’ve tried it with 12S (2 6-cell packs) and it’s harder to take off and doesn’t climb as fast but it does seem to run a little more efficient that way.

Yes, 7s is what we recommend for Batch 4. The motors are wound for the higher voltage and it also cuts down on heat/amp draw in the rest of the wiring.

Yes 7S/14S is more efficient. The same overall wattage under load but less current so less losses due to heat in harness, electronics and most important, battery cells. --> longer flights.

and most important, battery cells

Actually, the voltage of each cell remains the same so it doesn’t effect the battery cells at all. The only way to reduce the current in the cells is to use more total cells regardless of their parallel/series arrangement.

It also depends on how you look at it… if I have 6 packs of 6 cells and I change to 6 packs of 7 cells then I have added 6 more cells but I’ve also added the weight of those cells and I fly longer because my batteries are bigger. But I also reduce amps per cell because I have more cells (not because I changed my pack voltage).

Paul you bought a second motor? Or did you upgrade your batch 2?

I assembled a batch 4 for a local friend.

Yes 7S/14S is more efficient. The same overall wattage under load but less current so less losses due to heat in harness, electronics and most important, battery cells. --> longer flights.

How is it more efficient in relation to wattage?

You will fly ca. 15% longer, because you are carrying 4.5 pound more weight on cells! 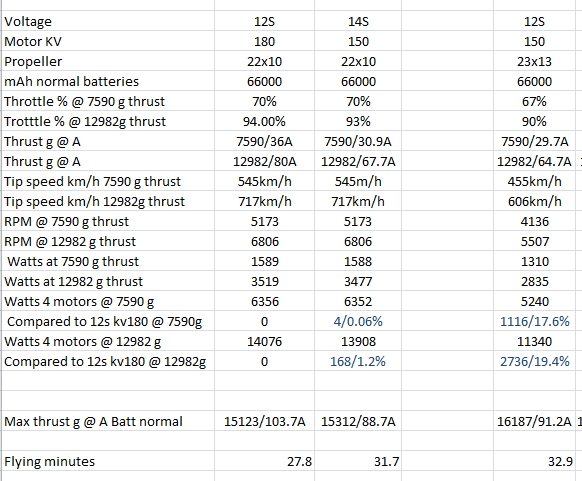 More efficient because there is less power lost to heat… probably very minimal improvement but it is a fact that heat is waste.

Also, the ESC is more efficient at the upper end of the throttle so if you use batch 4 with 6S batteries you will see a very small improvement there too but it’s harder to take off with that big of a reduction in thrust. I’ve done it a few times and it does seem to extend my flights by a minute or two but it’s hard to say for sure because my flights vary by that much anyway so I would need to get an average over time. 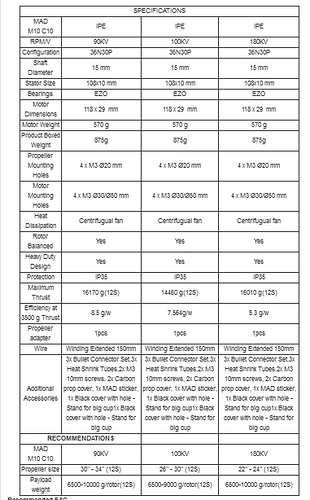 For the ESC’s it is the worst to work between 60-85% and that is what we are doing.
For my build I use the 100 A ESC’s with extra capacitors…

That depends on your ultimate goal. I never said it was the configuration I would want. I had the opportunity to test it so I did. But it’s not “wrong” if your flying style supports it and you are trying to run the ESC as efficient as possible.

Full throttle with 150Kv, 12S, and 22x10 props gives you a gentle climb at 100% throttle (harder to takeoff but doable). 85% throttle is probably close to level flight but still climbing. Therefore, with the given prop, this configuration is optimal for the speed controller according to your range. I’ve noticed a minute or two longer flights which is negligible with a 28 minute flight but still an improvement.

I would rather have more power for takeoff though as well as less noise by using that same setup with a slower, wider, higher pitch prop. I think we both agree that would be more efficient from a propeller standpoint but then level flight would be in the 60-85% throttle range which is less than ideal for the ESC according to your figures.

Why would less than 60% be ok though? The ESC would have to switch rapidly at anything under 100%. What if we were able to get level flight with just under 60% and climb with just over 85% and takeoff with 100%? That would be ideal according to your figures, right?

Hi guys,
Still waiting for my batch4, and looking for batteries, I see a lot of 6s available for sale from the internet and shipping to europe(France) but 7s are not really « out there » to find.
I was heading to 4x6s but I read here that the last batch is intended to run on 2x7s’s…?
If take off capability is impaired, I will « have to » go for 7s, but I am confused about « the best option » to have a smooth running system. Endurance is only a background concern, I am more afraid of making mistakes with the use of batteries.
Also, not having the system at hand, I wonder what information you have while flying to manage your endurance/avoid any damage/risk to the battery packs.

Thank you for any hints on that subject (I’ve been reading a lot on the forum, but did not find the answers to these questions)
Safe flights to you all!

Forget the ESC’s… You are building your system around the motor! The manufacturer just recommend
a 30% bigger ESC then max amp from the motor. That’s it and is what drones and electric rc planes are doing.
Big efficient drones go for 40 - 60% throttle at hovering, because that is where the system works the
most efficient.

That would be for us level flight! 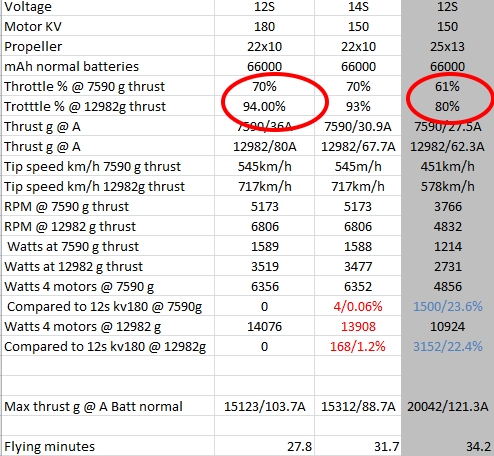 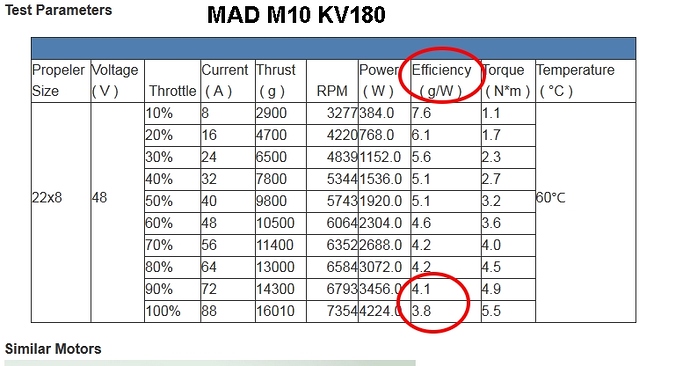 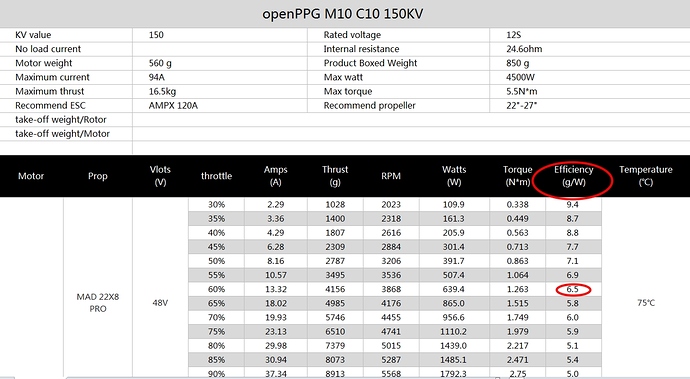 The best motor efficiency (g/W) is the target and with over 90% throttle you create a lot of waste heat
in the motors and the efficiency goes down.
Our 4 x motors have around 18KW output and are plenty powerful, we should not waste it with high
throttle.

I wonder what information you have while flying to manage your endurance/avoid any damage/risk to the battery packs.

Use 7 Cell batteries with batch 4 as intended. You need to use at least 4 packs. I prefer 6 packs to keep the batteries running cooler. The max amp draw at full throttle will be around 300 which is not too high for the system to handle. The display on the controller will display amps and volts. Don’t let the volts drop below 49 (that’s 3.5 volts per cell). If it hits 49 volts you can use less throttle and extend your flight a little longer just don’t let it go below that.

I think we both agree that would be more efficient from a propeller standpoint but then level flight would be in the 60-85% throttle range which is less than ideal for the ESC according to your figures.

Why would less than 60% be ok though? The ESC would have to switch rapidly at anything under 100%. What if we were able to get level flight with just under 60% and climb with just over 85% and takeoff with 100%? That would be ideal according to your figures, right?

In terms of heat dissipation and efficiency, an ESC is most efficient and generates the least heat when run at full throttle. At partial throttle the PWM switching losses kick in which generates more heat. But as the throttle is decreased the ESC current decreases correspondingly. What this means is that as the current decreases with decreased throttle, switching losses also decrease…