I am fairly confident that I would like to have 2 full size batteries for longer flights on my trikes. This has been the plan since before I even ordered the SP140. Now that I have actually flown it, I am sure this would be a good option…if… (key word there) adding is as simple as I think.

For those more electrically sound than I. I know you can use 2 batteries in parallel as long as they have the same voltage, which in this case they will have. My question is… is there some off the shelf connector that I could purchase if I bought a second battery and wanted to connect the two together? Are the current connectors for the battery XT90s? I am thinking to put the second battery basically under the existing one, sitting on the trike itself and mounted. My guess is that is 3 ft of wire needed at the most to connect the two batteries together? Is the 14gauge enough at that short distance? 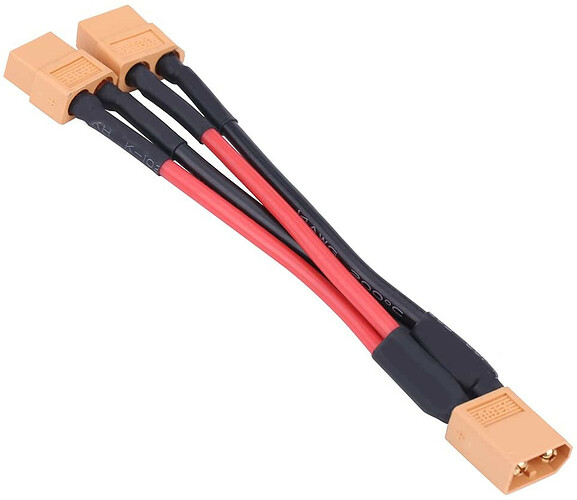 Any help would me much appreciated…any link to what I would need?

I would advise you to keep the wires between the batteries and ESC as short as possible because longer wires create more induction which causes voltage spikes. I’m not sure how resistant that ESC is to voltage spikes but 3 feet is quite long. Also keep the red and black wire routed close together because the flow through the wires in opposite directions help to cancel the induction. It would be better to have long wires between the ESC and motor than between the batteries and ESC so moving the ESC may be a better option. Note: This induction issue can’t be fixed by using a heavier gage wire.

Is the 14gauge enough at that short distance?

You are correct about connecting them in parallel. Since each pack has its own BMS though I’m not sure if that would create any issues.

If you have no choice but to have long wires you should make up a capacitor pack to reduce voltage spikes. For 3 feet I would use 4 x 1,000 uf capacitors which is a little more than 100uf per foot. I have about 6ft power lines on my setup (not open ppg, twin powered HG) and use 8 x 1,000 uf capacitors right before ESCs. This is in addition to whatever caps the ESC has. I haven’t had an issue with voltatage spikes in my setup. Also make sure your caps are rated at least 40-50% over intended voltage.

I’ve slept since that last comment and glydrfreak posted some specs. The SP140 is using 8AWG from battery to controller and the connector is a Qs8 (rated at 300A w/ 6AWG - probably a peak). I’m not sure why I was thinking about a sustained 25kW, because that’s ridiculous for a paramotor - 15kW for a short period (about 20hp) is within reason and that’s closer to 150A and not sustained. 8AWG still seems a little undersized, but I guess there’s enough airflow and the sustained current isn’t too high.

Blockquote …second battery basically under the existing one…

Make sure the cables are exactly the same length to the controller. The other guys are right about the ripple current as well - you might be better off relocating the ESC to the battery packs than installing a large capacitor bank.

Can this concept be used to have 1 Full Size (4kw) battery, and 1 Feather Battery (2kw) (smaller one)?

Or both batteries have to be the same size? 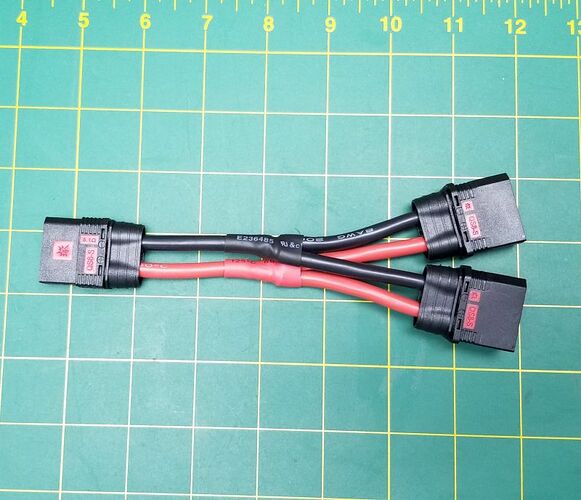 Yes - you just have to make sure the connectors are correct at each end. Male at battery so female at double end of Y or vice versa.

Has anyone addressed any issue with the BMS’s and paralleling them?
Cheers

This is the right way to go about paralleling the two battery packs.
I’m not convinced the voltage spikes will be such a problem extending the wires by 10-30 cm like what is shown with the connector.
If it helps settle the debate, i’ll make up a longer set of cables ( which I need anyway because I’ve relocated my battery ) and put my scope on the ESC supply terminals and monitor the voltage while I go full power to no power.

I think a more pressing problem, and one that E-pusher hints at, is how the BMS will handle the situation where one battery has discharged and kicked out, but the other still has enough capacity to power the unit.

If one battery kicks out, the other will immediately take up the full load, and the wires will be stressed to full load.
You need to make sure that the cable lengths from battery A and B are as close to the same length as possible so each battery discharges evenly. This is more of a problem with smaller series packs, like 6s/7s in the 24v range. At the 80-100V a slightly uneven voltage drop won’t be as considerable. You should also be sure to use 8awg high strand count cable. I already think the 8AWG wire on the stock unit is at it’s maximum so don’t go any smaller than that.

You also won’t have much protection against the event of plugging in two batteries at different state of charge. If one battery is fully charged at 100V, and the other is discharged at 80-85V plugging them into the parallel connector would be catastrophic.
800 or more amps would flow and damage both BMS’s and probably damage the discharged battery. The Y junction of the connector would catch fire before you even realized what happened to unplug it.

You should think of a pre-check or routine that ensures you avoid such an event.

You also won’t have much protection against the event of plugging in two batteries at different state of charge. If one battery is fully charged at 100V, and the other is discharged at 80-85V plugging them into the parallel connector would be catastrophic.

A couple of high current Schottky diodes as safe guards?

The specs needed 100+ fwd voltage, and 150-200A would be rather rare diode, probably need an array of several diodes.
I would prefer to keep the the amount of voltage drop components in the circuit to a min. But this is a solution.

I am using a simple 3 way 250 amp swith with ignition protection from RV world. works great!

I don’t think it is as big as an issue as stated. The batteries have a standard BMS which has a preset max charge setting. Hopefully Gen 2 batteries will have bluetooth.

you can confirm with @Pdwhite regarding the overcurrent settings from factory. If it is set, the BMS will keep shutting off. If you keep them both charged or check voltage before you leave, shouldn’t be a problem. the BMS is a backup protection

Ok I follow the RV nomads who routinely run Lithium batteries in parallel. Some up to 7 batteries, all with protection ckts.(bims)
They do not require caps or other parts to connect to an electronic device. There are no voltage spikes. Something like illustrated in the pic would work but when playing with electricity, caution is always the word for your actions.
Of course in the case of those Lithium batteries, the batteries are not disconnected to charge them, as the solar panels are connected through the regulator 24/7 and they are charged during Sun hours.
When two batteries are connected in parallel, the voltages match and the current sent to the motor from each battery is half what one single battery would have to supply. The batteries should be close to the same age and condition or a good battery would end up feeding(charging) a battery that is not in as good condition.
If you really want to get fancy, you can add a marine battery switch which allows you to put battery 1 on, battery 2 on, both batteries 1 and 2 on, or both batteries off. weight would be negligable compared to an additional batteries weight.
A thought here about the length of the wire/cable. Distance Does make a difference as resistance builds up in long lengths of cable, but 3 feet would not have that effect other than having a lot of extra cable that you have to tie to the frame to keep out of the prop.
But the wire/cable size means everything. If you size it wrong so you have just enough capacity, then the resistance will still affect your power flow, the wire/cable can heat up, and you won’t have full power from the motor because you lose power generating the heat in the wire/cable. If the cable is too small, the wire/cable will get hot and if it gets hot enough it will fail.
I would advise just get the same size wire/cable that connects to your battery now. that will be ample size for an additional battery.

I used a 3-way switch in my 48V ebike with 2 batteries (battery 1, off, battery 2). I NEVER run both batteries at the same time (in parallel), since they are charged separately and I didn’t want to worry about exactly matching their voltage every time before connecting. If you connect 2 batteries with different voltages in parallel, one will try to VERY RAPIDLY charge the other, which is very risky but can be fun to watch from safe distance.

In your case the batteries could be connected permanently and charged always together, which should eliminate this problem. But you should probably research a device like DATEx2, that would “balance” the batteries, and also handle charging (not sure if they can handle 100V DC): https://biggamebikes.com/product/datex2-parallel-battery-adapter

I’ve been wondering the same thing with extending the range with my trike. More weight but with wheels and the right size wing should be doable. It seems safer not to try connecting 2 batteries in parallel from the discussion above. Either a switch or even manually disconnecting one battery in flight and connecting the other. Switch would be best but in a pinch…

We just need someone to manufacture a battery in the exact shape of a trike frame.

The trike might be heavy - like 80 pounds, but you could get three hours if you remember to charge the trike too.