Body
Better paint. is the frame powder coated or just sprayed?, it doesn’t seem like the paint will last too long.

Battery:
I haven’t opened up the battery so maybe @Pdwhite can fill in the blanks:
Ideal battery I’d like to see:

This is an aircraft after all, I’d like to monitor the items critical to flight/safety.

Is the frame powder coated or just sprayed?

Ya this is going to be changed

ESC temp can be shown but its really not that interesting as it doesn’t get close to its 120c cutoff. If you want to see it you can look at the ESC logs also. For a battery temp display unless running more wires for the connector i would like to just make it wireless. I am testing a Bluetooth BMS it show all cells voltages and temps as expected its just sucks to have to have a phone to connect to and display it. I really would like it to just display it on the controller especially. Just weird to have to take two different Bluetooth signals and have them all three talk.

Ya working on better fit, just not worth to work on a mold right now, but making some changes to the case for the next shipments.

BMS is rated for 350A right now so that is not a limiting factor. 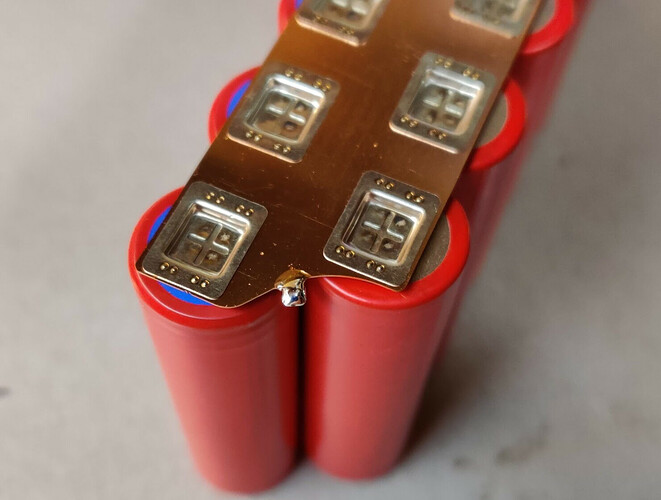 Individually fused batteries is not common practice, in fact I haven’t found a battery in any product I have or taken apart that does that. And with high power draw packs is very contradictory, like as you said above using copper bus bars vs nickel because the extra resistance make usable power turn into heat. So fusing each cell is just the same thing as having highly resistant nickel strips sort of. Then when using your battery pack for flying the fuse will be converting a chunk of power into heat and then that will also heat the packs up more then with using copper bus packs. So it all tradeoffs, also the other thing is cost, as fusing each cell is very abnormal in battery pack manufacturing right now it makes it more expense even if I could find a place that could do it.

I’d like to monitor the items critical to flight/safety.

Ya my goal is to make it as automated as possible to you don’t have to look at a bunch different numbers and figure out what’s in range. Like looking at each of the 24 voltages on the controller or whatever is not very good, and just showing the minimum info needed is best so you can just focus flying and not be distracted. We will just have warnings shown if something is out of range.

Like looking at each of the 24 voltages on the controller or whatever is not very good, and just showing the minimum info needed is best so you can just focus flying and not be distracted. We will just have warnings shown if something is out of range.

Yep think of our design choices as closer to Tesla vs a 737.

@Pdwhite , really glad to see that the innovation continues! Please keep us early adopters in mind, as I am sure many of us are interested on some of those upgrades.