Somebody posted this video on Youtube of their swing arm breaking during acro maneuvers (“infinity” maneuvers): Yes that is @glydrfreak he is a regular on the this forum and helps with openppg development he designed a lot of the SP140 controller.

As for the goose neck bars they are titanium bars but they where not made for acro heavy flight in mind. They are the same specs as the nitro 200 and others that use the similar design. There is only a handful of people that I know of that have ever done an infinity tumble with a paramotor. As it’s such a niche requirement the Sp140 standard titanium bars are not designed for these high G maneuvers.

. I do like the former my self. So there are not large demand for them right now and I would venture to say Braedin with be the only person to be doing infinity tumbles on his Sp140 for a good while.

Also Braedin and I did talk prior to his attempt and we did think think there was a good chance of the bars bending and I told him if he did bend them I would send him a new pair so he can fly normally after. But I’m sure he will chime in at some point on this thread.

More so surprisingly to me, the high strength M8 bolts that hold the swing arms on are still fine, as long as they are checked before each flight. Sometimes the nut can slowly work it’s way loose after several flights, so make sure your swing arms aren’t wobbly before each flight and the bolt should never bend. If 8 G’s won’t shear that bolt, I don’t know what will.

I’m excited for a stronger set of swing arms for myself, but I doubt more than a few people will need them.

@glydrfreak Thanks for sharing!
Good to see it all worked out well for you and that you made a safe landing without any injuries.

+1 for real world stress testing and being properly prepared for a material failure.

It makes perfect sense to clearly state what the SP140 was designed to handle and what not. This might prevent some folks by getting caught by surprise.
“Don’t try this at home!”

If I remember correctly there are swing arms with “acro” label for the Nitro which look pretty similar to the SP140 swing arms.

On my Nitro the bars had a supporting horizontal bar, which should prevent them from bending, but I am not sure if they would support this massive G load. Maybe that little bar should be re-introduced to the titanium bars of the SP140 as well. 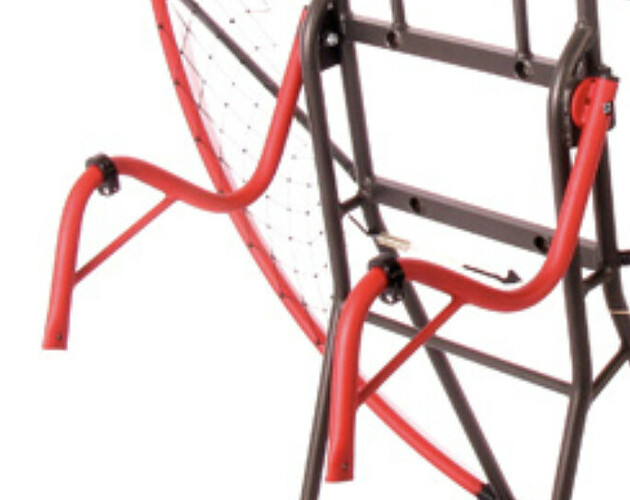 Hi, so it was also mentioned that a bigger reserve chute is appropriate, due to the heavier weight of the battery. How much bigger?

What motor were you flying before? I doubt the SP140 is that much heavier than your previous motor to make a difference in reserve choice, unless maybe you were flying a top 80 or something light. This unit is 78 lb with the 4kWh battery. That should help you figure out the size of reserve you need. Personally, I will always tend towards the larger size when I fly with a motor to keep my sink rate low.

I was about to buy these arms from aviator, then Eric said they don’t come with those straight reinforcements anymore! Super bummed, also cuz I think the red would’ve matched well.

I almost feel silly for my question about the strength of the swing arm mounting bolts. It’s quite reassuring to see tests like this. I’ll try and avoid doing the infinite tumbles 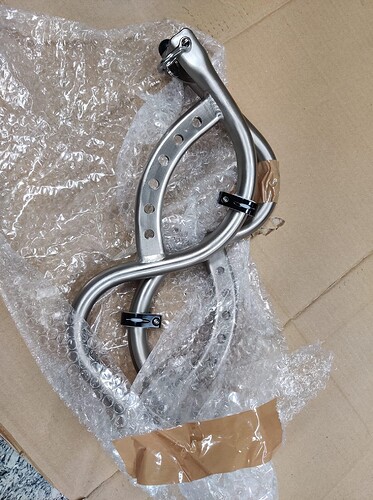 I just pulled the trigger on a set of these Macfly arms through Matt Minyard. The look has grown on me a bit, and I know I need this reinforcement more than anything.

Also, I’m ordering them in a wide configuration, meaning instead of having a torque offset to one side, I’m having them both angled outwards. Seems like it’ll be better for unpowered maneuvers.

Would you know their weight compared to the original Swan Necks? Just curious.
Thank you

To add further comfort to anyone who may be worried about the strength of the arms, Braedin was considering flying again yesterday with the same arms which he bent the other day. The bars only bent during the infinity tumble (they didn’t break) and they are still functional and strong. The motor isn’t in the perfect position with them bent but not far off.

Also, his weight with the motor, two reserves, and the large battery is over 250 pounds. An 8G maneuver multiplies that weight by 8 which is over 2000 pounds.

wow…that was crazy! Glad you are ok

Previously I said I was going to order a set of Macfly swing arms, but I changed my mind and purchased some CNC cut arms from Iris Paramotor instead: 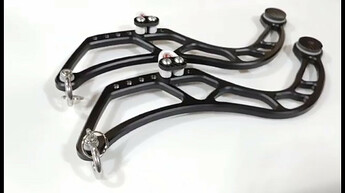 I’m very impressed to say the least. They look so good on the SP140 frame. They have been properly engineered with FEA analysis. They are 6061-T6 aluminum and load tested up through 2000 lb per arm (limited by the strength of the press), whereas the swing arms that come with the SP140 bend at 1100 lb.

Again, 90% of pilots will be well suited for the standard SP140 arms, so I don’t want to raise any alarm. I needed the upgrade in order to fly the way I do. Here’s an image of my new swing arms in action: 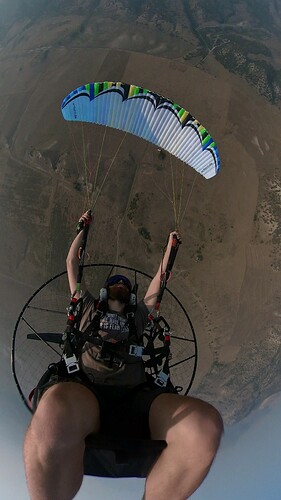 I know you’re busy… but since you said how dope they look, any chance we could get a nice closeup side shot sometime?
Thanks! 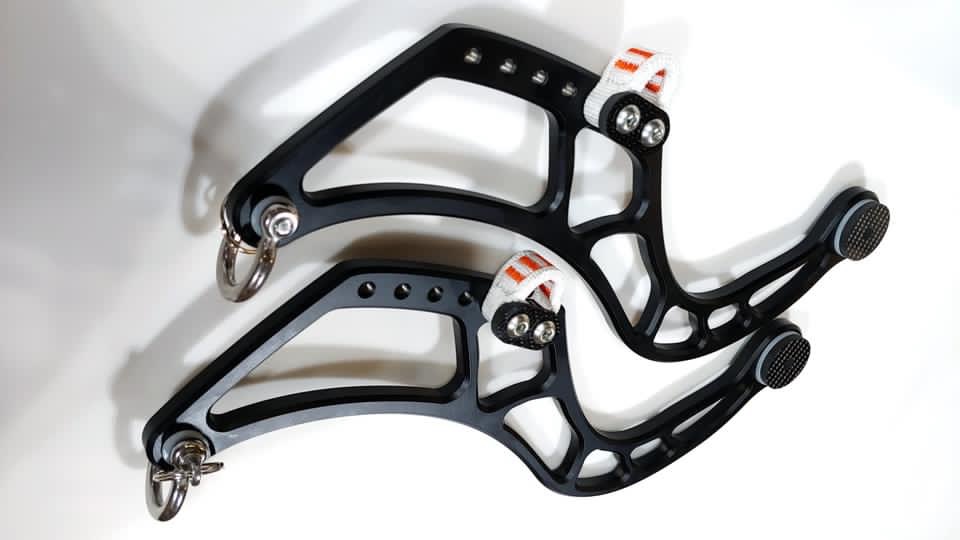 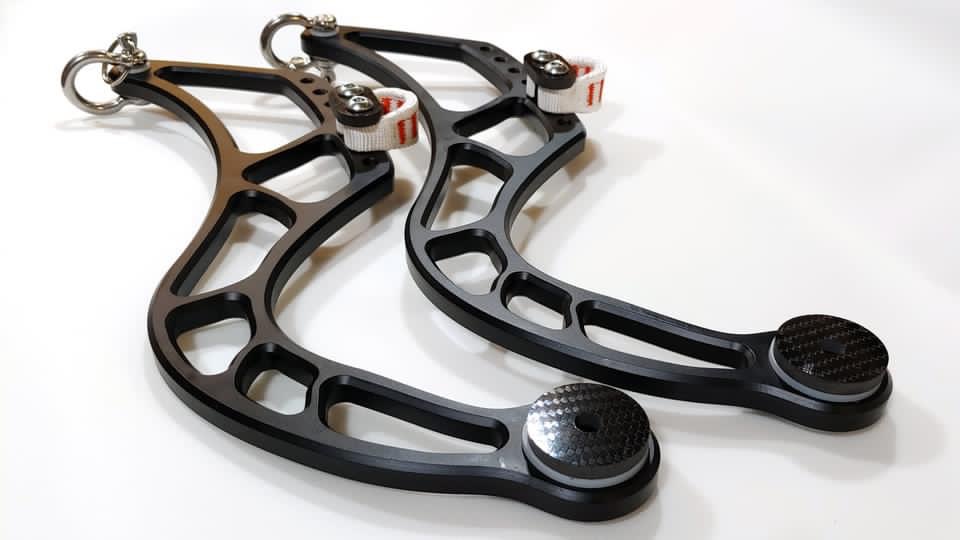 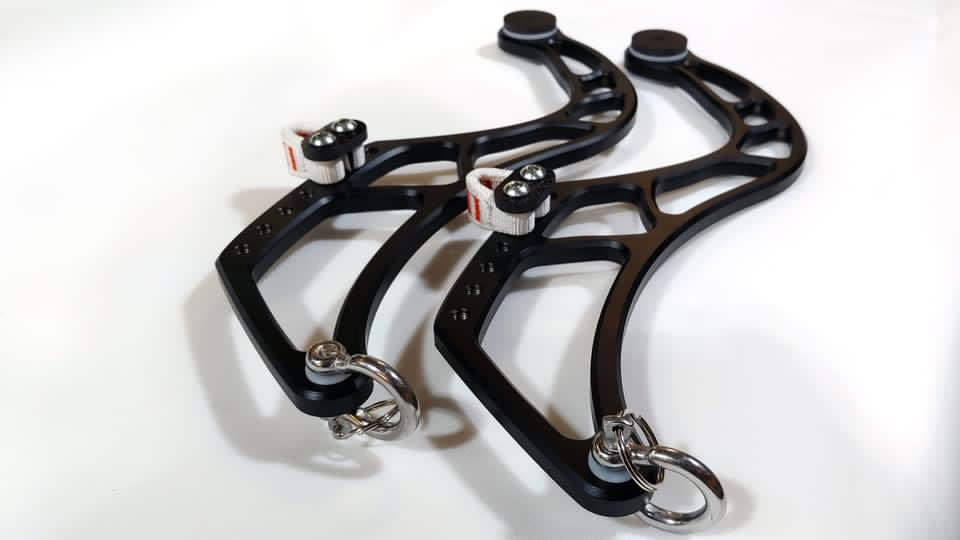 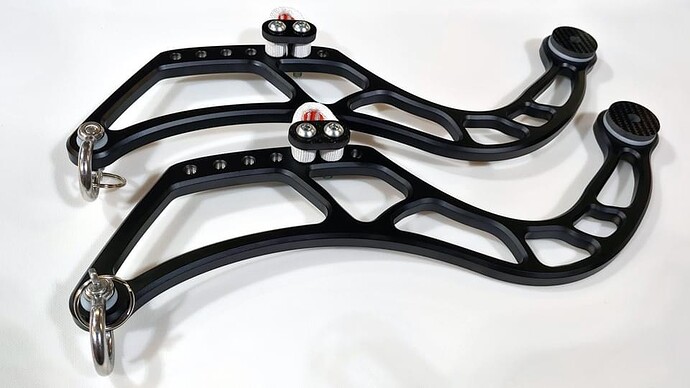 Thanks! you weren’t kidding, they are beautiful

I guess I should have been more specific, I was thinking more attached to your rig… but all good!