@Pdwhite I’ve completed assembly of my SP140, but am having problems with the hang angle. I’m 5’6" and 164 lbs. I see some older discussion threads about pilots being unable to adjust the hang angle enough with the current gooseneck bars. It sounded like some improvements or modifications had been made to allow for a wider range of pilot weights? But the gooseneck bars that came with my unit don’t seem to solve the problem. I still can’t get the hang angle right.

I don’t think my paramotor is flyable in it’s current state. I’ve moved the hang points back as far as I can, to the end of the curve, and I’m still leaning too far back.

What are my options? Are there other arms available that work for lighter pilots? (It sounds like you were working on some here: Hang Point test am I doing it wrong? - #10 by Pdwhite) Are those available?

Have any lighter pilots tried these Iris Paramotor arms? Do they work any better? 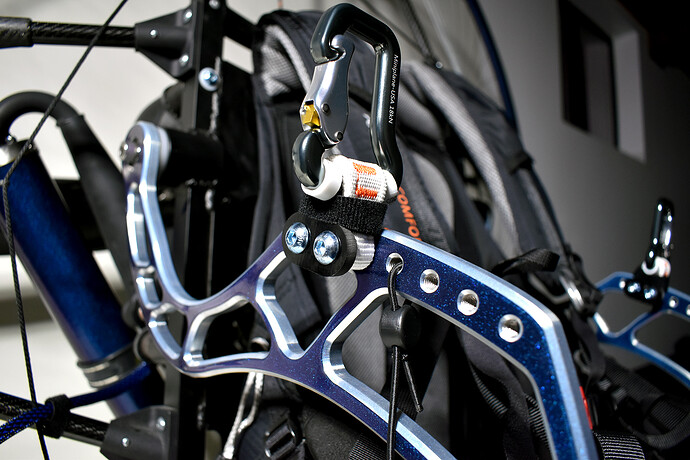 What’s the best angle you can get currently?

Here are a couple photos. My phone says the angle is 24 degrees. The second photo is to demonstrate that at this hang angle, I won’t be able land on my feet since I can’t get my feet underneath me. I’m guaranteed to land on my ass. 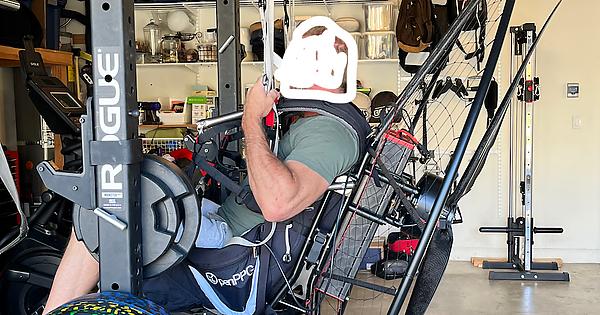 First of all, good on ya for hang checking! That would’ve been deadly if you launched like that.

Second, I’m 165 lb 6’0” and my tubular arms worked good enough with the collar all the way back. I wonder why the heck yours is so much more reclined than mine was.

I’ve upgraded to the Iris swing arms and still have one more empty hole back that I could go. I HIGHLY recommend the upgrade.

I just tried to hang test. I’m at 196lbs and I have a 15 degree hang with the stopper way too far back. 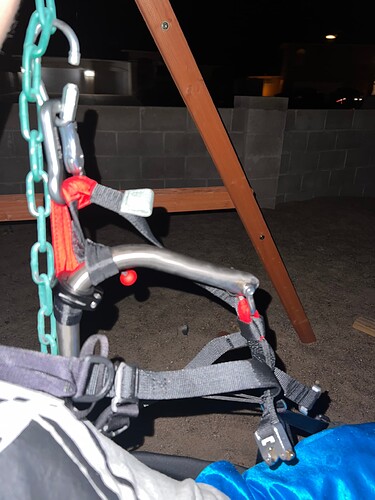 Thank you for this information! The Iris swingarms sure look nice, but I wonder if they’ll solve my problem, given the information you provided. Since you were able to get the stock gooseneck arms to work well enough, and you have the Iris swingarms almost all they way back, I’m not sure if they’re going to shift the hang point enough to fix my problem.

I wonder why I’m tilted so far back. We’re the same weight, but you’re quite a bit taller. Would that shift the center of mass that much? It doesn’t seem like it would.

I have the 1 hour battery.

I have the 1 hour battery. But I have to disagree with you, @Voltair: 165 lbs isn’t light. It’s a normal body weight for an average-sized person. I’m not interested in buying a 2kWh battery. I’m interested in fixing the geometry so I can use the battery I have. Average male height is about 5’9", and ideal body weight for that height is about 155 lbs.

I wrote “part of the problem”, not the problem. It is only a contributing factor.
Here’s my setup. I moved the webbing beyond the black sliding metal clamp. I am not suggesting you do that but it helped in my situation. 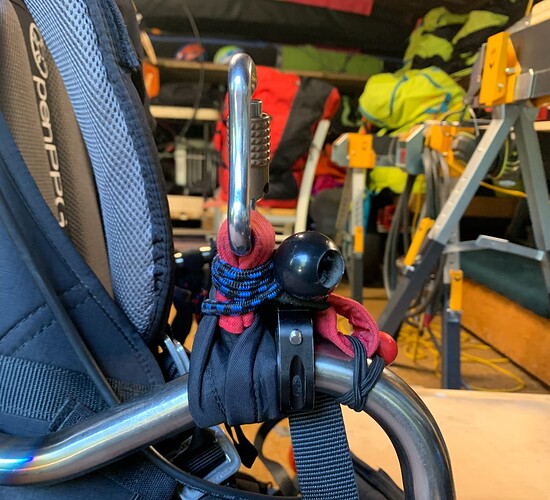 Yes! Now that’s the kind of ingenious idea I came here for! Thank you.

I think that might help. I’m also going to try adding some ballast under the seat.

Has anyone thought about (or tried) loosening the straps that attach the harness to the frame? Maybe if the harness hung down from the frame a little lower, it would shift the mass forward a little bit. I can try doing that during a hang test, but I wonder how much it would affect launching and landing if there’s an inch or two of slop in the harness/frame connection. Might be kinda weird.

Wow… check this out:

I just redid my own hang check after flying it for over a year. Keep in mind this is with the Iris arms where I still have the option to move the hang points 3/4” back. During this hang check I measured 17° reclined. If I try to push my back rearwards I can get it to sit at 25° reclined!! See photos below for the difference. 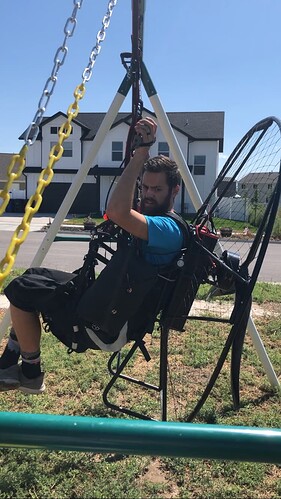 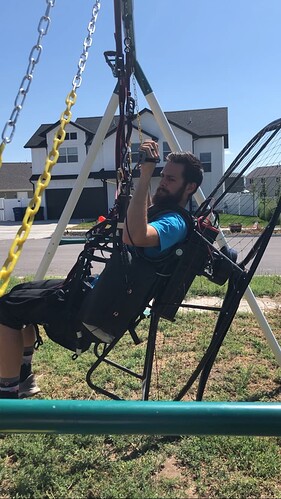 I always tell my students that 10° reclined is ideal. 15° is ok. Anything more than 20° is a riser twist danger. I think I’m going to re-evaluate what I explain to my students, because in the video below you can see how my prop goes parallel with my hang straps when I add power, even when I’m trying to recline as far as 25°. I’ve realized some motors pitch forward more than others when throttle is applied. When the prop is parallel with the straps (or glider lines) there’s no reason for a torque-induced riser twist. I now believe that a full power hang check is crucial to verify the prop is within 10° of parallel with the straps. It’s interesting how the geometry changes with power applied, but I’m not sure it’s super helpful during a hang check. The tie-down straps are attached to a static point above your head. In flight, I don’t think the risers and wing would be able to resist the thrust vector the way a static hang point does, so I wouldn’t expect the risers and prop to converge on parallel as much as you see in this video.

You’re right that the moving wing would be different but the force on the motor would also be less and you wouldn’t swing forward as far. A static hang check with thrust would still be valid as long as the strap angle was used as your reference plane. You would swing forward more with the static test but it’s the angle relative to the straps that matter.

Paraglider lines don’t push. TRYING to fly at that angle would likely have the thrust pushing you up towards the wing enough that your wing wouldn’t be able to stay inflated. Your landing would likely be very sudden and very ugly.

so I wouldn’t expect the risers and prop to converge on parallel as much as you see in this video.

That is so true!!! The glider will lag some but his getting to nearly parallel is because of the static attachment. And unless he keeps full power all flight, he risks possible wing collapse with every acceleration back up.

I can’t tell from your photos or your video but if your thrust is actually pushing forward then your hang points are too low. What I mean by that is in reference to a horizontal line from center of thrust (motor) to your hang points. If thrust is higher than the hang points, then it will tend to push your head towards the risers when accelerating. If the thrust line is below the hang points, it will tend to push your head back away from the risers, and your feet up when accelerating.
But in your case, I think it is most likely due to the swing out of the static attachment points.

I just watched a video of me flying today. It was a side view where cut the throttle. The angle of my motor relative to my lines changed just like the static video posted above and in the same direction too (motor tilted forward with thrust). Photos of my hang test show the hang points are right in line with the thrust angle. I believe the CG being low comes into play here as well. Nonetheless, static vs flying shows the same relative difference between suspension lines and motor angle.

So if your saying it’s safe to fly at say 17 degrees because when you hit the throttle it is more like 10 degrees but wouldn’t that mean when you go to land and you are hanging out of the harness with no power your legs would be way in front of your butt making it hard to get your feet under you and support a 80LBS unit on landing… ???