I put this video together on two of my students requests. One has received his machine but has not yet flown it (weather related), and the other will have to wait for batch 2 (the end of August) to get his toy. Enjoy!
Watch on a larger screen. 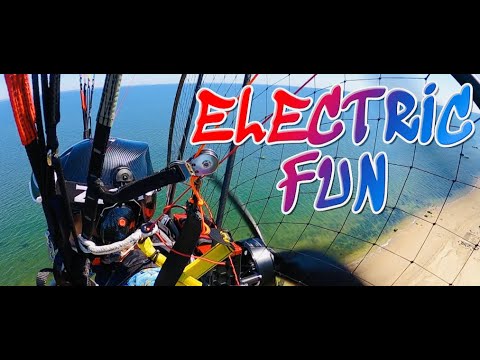 Do you have to weigh shift to the left and pull any left brake for the motor torque on take offs?

Yes, and I asked Paul last night if he could make me a set of straight Swan Neck (not warped but same curves). I know it will be an issue to some pilots with a PG background who want to be OFF power and fly straight hands up as I do. It is not just an SP problem. I was debating the issue two days ago with a PG/PPG friend who has logged over two thousand flights on his gas machine and loves as I do, free-flying (ridge soaring locally). He told me that yes it is a pain having to compensate for the drift all the time. It is not an issue for the "Flat-Landers"

who will be flying under power most of the time due to the terrain and topography they cruise . They will no think much about the compensation - it is “normal” to them while flying at idle speeds. The brake correction becomes part of “the way it is”, but in my case and my friend’s case, it is a problem to address because we PG ridge soar a lot and top-land or do Touch & Go on a very small platform at the edge of a cliff at the takeoff area, and a glider drift messes up the approach, the reference points we use with brake control coming in for a landing go out the window because we have to fight the counterclockwise pull.
Paul knows about it and will see what he can do with a set of experimental Swan Necks without the torque compensation.
Our local cliff is about 100’ high at the seashore plus the tree line height at the top (another 50 to 70’). It takes me about 10 to 15 seconds from the beach to power my way up to the base of the lift band,… in other words barely use any electricity to get there before going back down to zero RPM. I have done it with the X4 and landed with the 4 Bonka at over 4V. with a 1 hour flight after I begun the flight at close to 4.2V😃
Another advantage in our case is that the ridge goes flat in many places along the north shore (streets to access the beach, marshes, etc…) and the PG pilots have no choice but turnaround when the cliff become too low to soar. An electric PPG becomes a huge asset, allowing me to bridge the gaps and resume soaring without power. We have miles and miles of cliffs at the north shore but are stuck as PG, unable to take advantage of them unless the gaps can be crossed both ways.
I am sure there must be tons of pilots worldwide in this situation trying to reach an inaccessible soaring spot by foot - for example, a cliff with private property at the top, too hard to reach because of the vegetation). Looking at the SP as another means to justify an end.
I already started messing around with anti-torque fins attached to the hoop spars instead of the net. The idea will be to have Swan-Neck canes without the torque compensation built-in to fly straight hands up at zero RPM but have the anti-torque fins kick in when the SP revs up to also fly as straight as possible. I will use the same wing and size in the same weather calm conditions to compare and see how many fins are needed and where they should be located on the spars. I hope to get the best of both worlds😃

…allowing me to bridge the gaps and resume soaring without power

Even eagles flap their wings to take off and bridge gaps between lift.