What about this kind of engine? Can it be used for a paramotor? What are the pro’s and cons?

You would either need a gear reduction or a 600-700cc radial engine to have a decent size prop and even though they are 4 strokes, they still burn oil. Other disadvantages include more maintenance, much higher cost, harder to find parts, and an amazing sound that you just cant resist, so you will be flying a lot. lol.

Radio control radial engines run at a much lower rpm than 2-stroke paramotor engines, so you tend to need a much bigger radial engine for the same power. because of this, I recommend looking into Moki radial engines. You can find them up to 500cc and about 25hp which would be better for most people than the 15hp 260cc engine you have specs pulled up for.

Someday I will make a radial engine powered paramotor with Moki 400cc or 500cc engine and a gear reduction as it would sound amazing and look awesome, but it would be one of those show pieces that you wouldn´t fly often and it would be more for taking to airshows and fly-ins just to blow peoples minds.

I found one of the engines that Bratwurst was talking about on ebay for $2750. This forum won´t let me post a link to ebay, so you would need to look it up.

Here’s a link I found: The König SC 430 is a three-cylinder, two-stroke, single ignition radial aircraft engine designed for powered paragliders and single place ultralight trikes. The engine was originally designed and produced by Dieter König of Berlin, Germany. The design was sold to Zanzottera Technologies of Italy and then sold again, along with the rest of Zanzottera's two-stroke ultralight aircraft engine line to Compact Radial Engines of Surrey, British Columbia, Canada. The SC 430 is a unique three cylinder ...

Apparently, Germany’s Konig was sold to Italy’s Zanzoterra, which was then sold to Canada’s Compact Radial Engines

There seems to have been a larger engine, SD 570:

The König SD 570 is a four-cylinder, two-stroke, single ignition radial aircraft engine designed for powered paragliders, powered parachutes and single place ultralight trikes. The engine was originally designed and produced by Dieter König of Berlin, Germany. The design was sold to Zanzottera Technologies of Italy and then sold again, along with the rest of Zanzottera's two-stroke ultralight aircraft engine line to Compact Radial Engines of Surrey, British Columbia, Canada. The SD 570 is an un...

Also, are fewer cylinders better, in relation to a given horsepower? And if so, then why?
Any such thing as a 2-cyilnder radial engine? 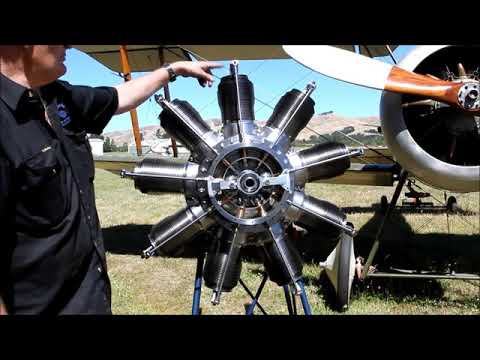 Apparently, these were developed (back in WW1

) because their rotation helped to aspirate the engine, as well as to further cool it. To me, it would also seem that this engine rotation could perhaps also usefully counter torque.

Obviously this particular model is large, as it’s meant for a full-sized aircraft.
Has any smaller version of something like this ever been used with a paramotor?

I am under the impression several posts in this forum are getting way off topic lately.

People that come here are usually not looking some potentially usable designs or multi cylinder piston engines. We can all find hundreds of youtube videos on those topics easily.

If would be great if we could keep a bit of focus to keep the forum valuable and move unrelated stuff to other e.g. regular (thermal engine) PPG forums.

Alright, what about the Electro-Motive Diesel engine (EMD), or ‘pancake diesel’

These lightweight radial engines were used to generate electric power onboard submarines, so that they could be propelled electrically. Could these likewise be useful for generating electric power for an ePPG?

What are the pro’s and cons of that approach?

Any such thing as a 2-cyilnder radial engine?

They just call it a 2 cylinder boxer engine or a flat 2. The dle 170 and dle 200 is a common example of this type used by some paramotorists.