Hi.
Voltair is a great and powerfull EPPG perfect for ground takeoff and " normal " paramotor flight.
But what about a smaller version of the Voltair designed not for ground takeoff but with enough power to keep level flight and just a little bit of climb? Why? Well, I fly freeflight mostly in summer taking off from a hill, and most of the days we can fly thanks to thermals and some south wind. But many other days, and specially in winter you can’t fly because no wind and no thermals. But sometimes there is a very light wind that is just enough to fly but not too much.
So many of theese days I would love to have a small motor just enough to give me that extra push I need to climb a few feet and catch a small thermal or keep flight level to reach a good landing field.
Volatir has 70Kg of push, wich is a lot!!! But you need that much push to take-off from the ground. But to keep flight level and maybe climb a bit, with only 25/30Kg of push you would probably have enough. So a smaller version of Voltair would propably do the job and it would be more lightweight and cheaper, giving other users with less money the option to buy a good quality “freeflight pusher”
Someone else needs only an extra push during freeflight?

We actually call this paramotor OpenPPG. @Voltair named his machine Voltair and that is a cool name but perhaps not everyone will be familiar when you refer to it that way.

The heaviest part of the OpenPPG is the batteries. If you don’t use full throttle you can easily get away with using fewer or smaller batteries. The motors weigh very little to begin with so smaller motors wouldn’t cut the weight very significantly. However, you could use smaller props which would draw less power and then the frame could be a little smaller to reduce drag. The smaller frame wouldn’t save much weight though because it’s already so light.

I use this name because I built a bunch of electric PPG before named VoltAir. I designed gas machines before that and flew the lightest gas powered unit to date (12lbs motor/frame/cage) and later 17.9lbs up to 24 lbs machines with Boxer engines. I always gave various names to the contraptions (the BUG, the NewTron, the Piccolo, etc… ). My friends know Paul’s design as an Open PPG. I made quite many modifications from past experience to fit my personal needs (custom fit) as many other pilots do - fun! As you often see with boat names and when the owner lets’ say purchased a Sea Ray but gave it a name such as “High C’s” or “Vitamin Sea” etc… It is purely a personal thing. When people visit my school site and ask me about it I tell them all about OpenPPG 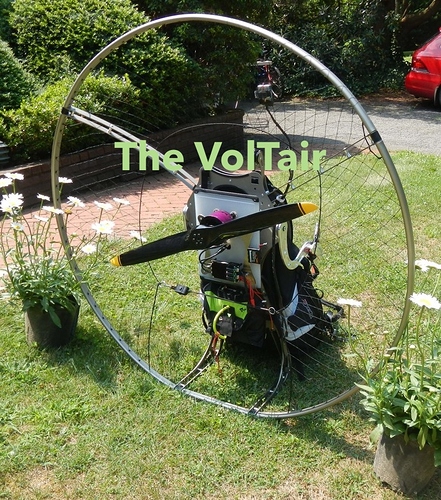 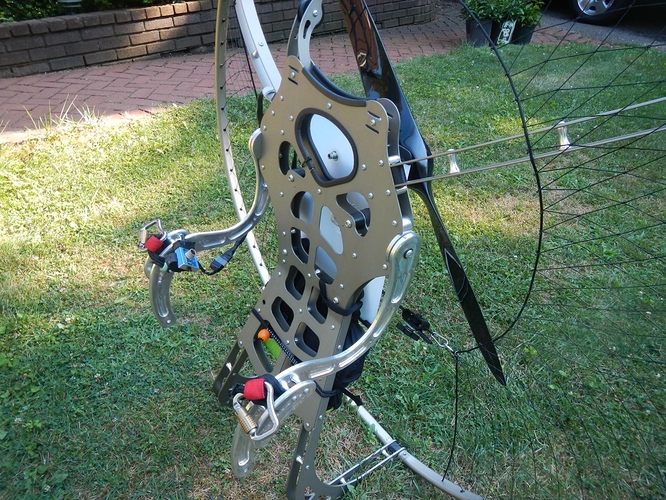 I like the piccolo with the hacker motor and 1 prop. But on the video tou posted it looked like it was underpowered to even keep level flight. Maybe with a little bit mor voltage you would have made the goal.
You think my project of the freeflight pusher would work with the piccolo setup but with a better motor or more voltage?
I love the small prop and the small setup.
How much thust did you get out of the piccolo setup?

oh… I thought you were referring to Voltaire, a french philosopher!

@Voltair what’s your website, you are referring to? I’d be curious to have a look.