After doing all the ground tests ( Batch 4 kit) with everything working perfectly, I decided to do the flight test.
When the power was turned on, the DC / DC converter burned and after that I found that the HUB and the Controller also do not work anymore, even powered by external USB sources.
I need to be provided with the following replacement items:

Hi!, sorry to hear that, I had the exact same problem, and waited a long time (january-june)to get replacement from Paul&Zach, but got the spare parts in the end…but it wasn’t easy.
I did not had to resign myself to rebuild the missing parts, but considered it strongly at some point… I wish you luck…

I’m attempting to purchase the control system components and have also not heard back.

hi thanks for yours message. As I live in Brazil and purchase my kit during the pandemic, all things was turned so difficult. After a long time I finally finalized my kit, then after tests well done these related itens burned. I think that ocurred due to contamination of electronics by carbon fibre powder during some parts sanding.
OpenPPG does not have a direct communication channel to attend us after purchasing this is our mejor problem.

Last May (2020), the same thing happened to me. I posted the following on the community pages recommending an immediate recall of the BECs - only to have my post immediately removed! It seems I am not the only one to have found this problem, but Zach and Paul’s response last year was to remove my post and not let the community know. I wonder if anyone has had their system explode in flight? Zach, Paul – please do not remove this post.
I am still waiting for my replacement parts.

Here is my post from last May that was removed:

I haven’t been able to put as much time into finishing off my batch 5 paramotor as I would have liked, but hopefully you would have found some of my posts of investigations into battery testing and construction interesting. But I have now found something rather concerning.

Two days ago, I was finishing things off and preparing for my first thrust test using my 18650 battery pack (14S16P). Everything was looking good.

Sometimes I noticed that not all the motors/ESC would initialise properly on start up, and only a full power cycle would clear this. I was investigating why this should be, when the DC-DC converter BEC that you supplied exploded! A piece of burning shrapnel only just missed me!

The DC-DC converter BEC that came with my batch5 is one of the cheap units from china. It uses the NatSemi LM2576HVS buck converter controller. The HVS version is rated to 60V (63V abs max). 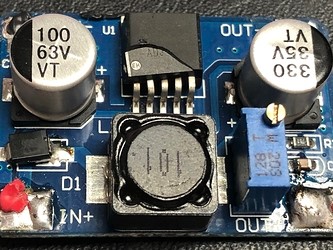 This regulator should be bullet proof. There is not much you can do to make it explode like this. (There is nothing wrong with my wiring!)

I am strongly suspecting that this regulator module may have been built using a ‘fake’ regulator device! The standard LM2576 regulator is half the price of the HVS version. There are companies in the far east that re-brand (re-print) the LM2576 as LM2576HVS and can then sell them at twice the price.

The lower voltage devices are rated at up to 45V. So, along comes my freshly charged battery pack at 58V, and it blows up!

In the thread “Carbon Props Experiment” grejen711 talks about the ESCs needing a re-boot. This was the sort of issue that I was investigating when the BEC exploded. From the experiences of others on YouTube who have encountered fake regulators, the LM2576 can go into all sorts of weird modes before failing.

I have replaced the LM2576 with a genuine LM2576HVS and the BEC now works and the main controller lights up. But it seems to have taken out my throttle controller!

Paul/Zak, could you please send me copies of the schematics of the main controller and the throttle controller PCBs so I can work out what might have happened to this so I can fix it??

And others with this BEC, please treat it with deapest suspicion!

Reading your post I understood that the DC/DC BEC failure exploding or burning by itselfe due to its quality…this iten is easy to purchase in every place, once is used on Solar Energy Systems, but the Controler and HUB needs to be supplied by Paul & Zach, or they have to give us the way to buy direct from manufacturer.

I’m sorry to see this happening to y’all but, I’m happy it’s getting attention. My Batch 4 is grounded too. I think opening a direct line to the manufacturer of the HUB is the best solution. OpenPPG is probably too busy with new developments to be able to take care of maintenance issues. No disrespect on them, just a fact when resources are limited. Is there any update on this moving forward? I’m a year and a half and $10,000 into this project and my feet have not left the ground.

Hi! All of us without a channel of direct communication with Paul & Zach. They doesn’t give us any direction to solve our problem, I am afraid, if the new project make sucess (one proppeler), all of us will lost our kits without any replacement pieces. Let me pray by a respond from OpenPPG once if they give us the needed support, many credits will be added to their new project selling. A direc channel to buy Hub, Controller and DC/DC BEC will be well come for all us.

In my case, Zach & Paul did eventually send out replacement parts to the UK. There is around 8 weeks until they get around to checking their email! I don’t think they will abandon the X4: it is a fabulous design with unique qualities but a very complex and time-consuming project. Hopefully they will evolve it to become easier to build. In my case it was an unknown electronic fault: they first sent out replacement hub which didn’t work then sent out a controller board which fixed the problem. Good luck! And be patient!

Yes we have been low on stock for the X4 controllers. Buy if anyone wants a replacement dc converter I can send them one.

The sp140 is not a replacement to the X4, we will continue to get parts for it. International shipping does take a while and it pretty expensive so try to make sure I get all the parts needs sent together.

I’ll be going though all the emails tonight and make sure each one gets resolved.

God pay you! Attending of my prays I will be so gratifully with you! I am an old pilot (70) then my time to fly this PPG is running out…a new Hub and complete Controler is what a need urgent! Just in case, an alternative provisory control will be well come!

How do I identify this faulty BEC? I am wondering if I need to replace the DC-DC converter.

I couldnt see anything that would identify the part as a ‘fake’. I would recommend putting 60V on the BEC input and monitor the output for strange behaviour. Leave it like that for a few hours and see if it explodes!

Even if it doesnt explode, I would treat this module with deep suspicion. A replacement LM2576HVS-ADJ can be bought from (reputable) electronics stores. I would recommend replacing yours with a new one.
You say you are in the UK? If you dont feel up to it, I would be be happy to replace the regulator for you if you send it to me.

that would be great! I will re-imberse you for your time and costs of course. Mine is a batch 4.
Where are you located? I am near newcastle-upon-Tyne. Have you completed the X4 project??

Has anybody had any luck getting a replacement HUB? It seems that I have been waiting an eternity and have not heard or received anything.

Yes, I got the spare partes! New RUB, DC/DC Converter (new type 60/5 V and controller All dully configured, once installed, all running so well.

Now I am just waiting for good winds for flying test!

Thanks Paul for that!

Good luck for friends waiting for spare parts, I hope that will be attended sooner as possible!