Two Bonka in a doubled Lipo bag arrangement. Made my own system - seams to work well. Did a few tests in my shop and the packs drop immediately. The Bonka wires disconnect instantly. 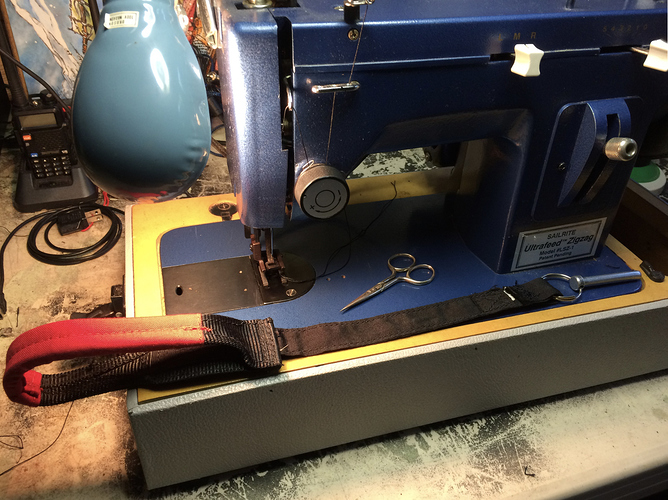 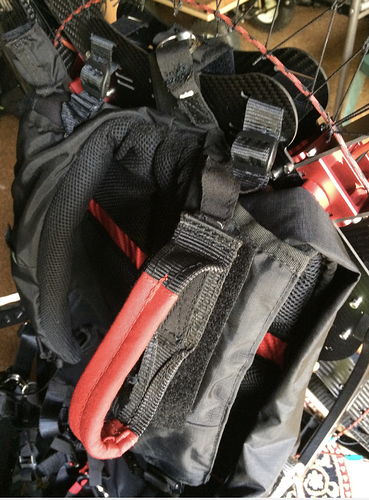 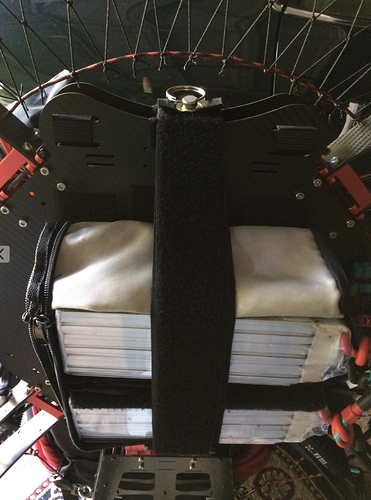 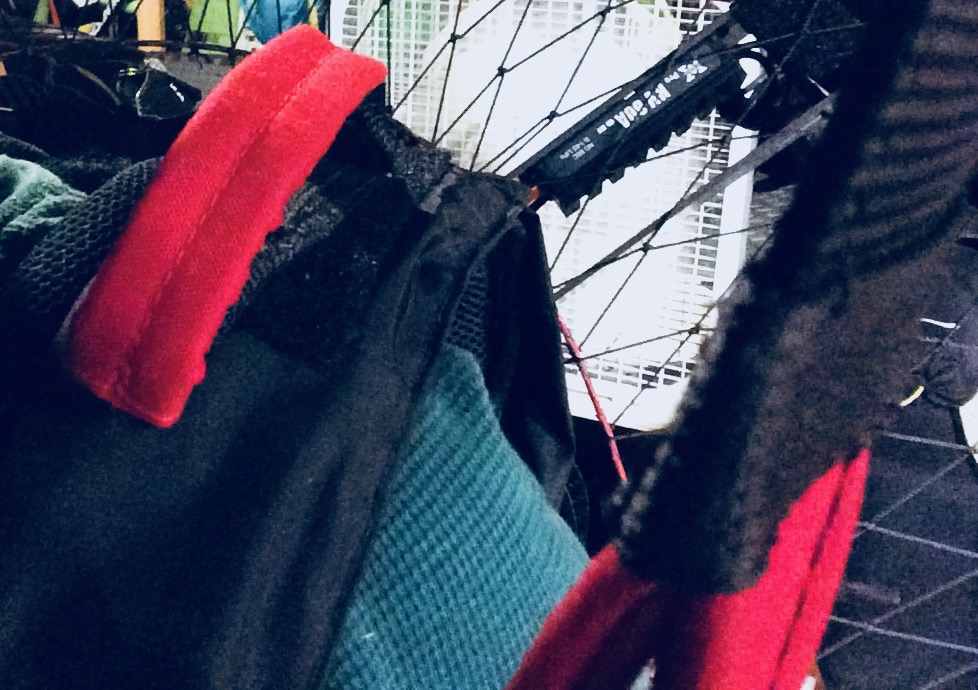 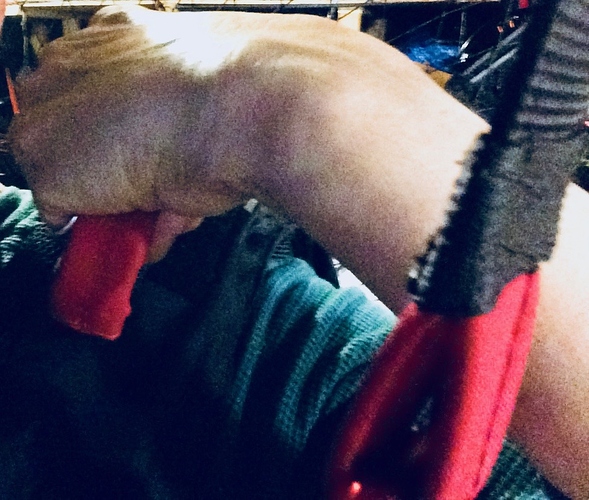 Nice setup.
I said this early on when talk started about a drop system that the bats would disconnect with the weight of these these bats.
Cheers, Patrick

I upgraded the release handle. Twisted the original strap to form it into a cord and locked it inside a piece of shrink tubing before placing red electric tape markers for better visibility. I also moved the handle velcro base lower on the left shoulder. The release mechanism system works like a charm. 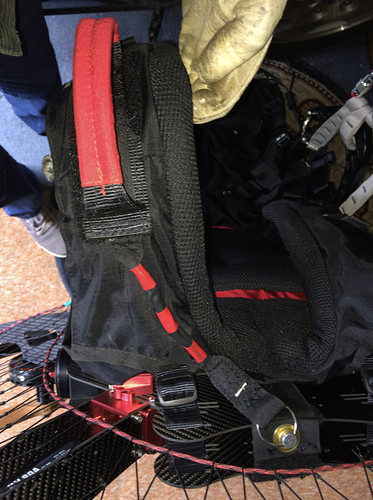 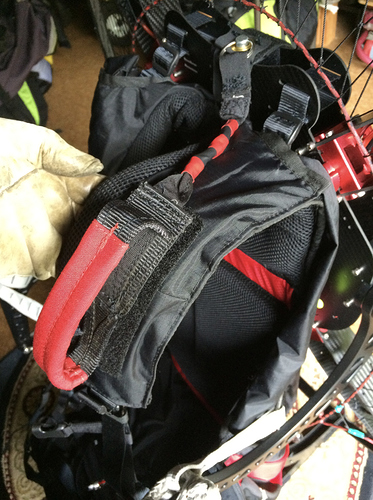 This is brilliant. Should be added to the standard design IMHO.

Would make me feel a lot more comfortable knowing a quick release is an option.

One thing I’m not clear on is how you structured the strap so that the pin holds it firmly in place. Wouldn’t want it to accidentally pop out during a sharp maneuver. Maybe a short video tour of your system would be easier to understand than pictures…

Hi David, I will have to make a small video of the system. The pin should not come out even when running on uneven terrain with the machine bouncing a bit. The most important part was for the strap which had to run smoothly and freely out of the bottom buckle (can’t seen on the photo at the base of the frame) as the packs fall off. I am waiting for two more large lipo bags from HobbyKing and will duplicate the set up for 4 Bonka(s). I may need to use a thicker strap though and have a metal buckle instead of strong plastic though. I used a standard velcro strap that comes with most wings and routed it from the back of the frame - I placed a piece of sticky velcro (soft side) at the top of the frame and one at the bottom because of the CF sharp edges - burned two holes in the strap at the right locations and installed two grommets for the pin. I had an old SUPAIR reserve parachute handle, shortened it and stitched a loop at then end. I twisted the reserve parachute handle strap a few times and locked it inside a piece of shrink tubing to consolidate everything Before adding a few pieces of red electric tape on it for the visual. I then inserted a key chain ring through the pin and the handle loop. I took a piece of 2" wide sticky velcro and pressed it down on the left shoulder strap (the first time it was too high) and relocated it lower to make it easier to grab with one hand or two. My handle already had velcro on it so it worked perfectly. The pin is pretty easy to pull out and even better with two hands.

Thanks for the description! Looking forward to the video when you get a chance to make it!

It has been very useful over the years, even if I am not an expert at it. This thing is built like a tank

I didn’t get the chance to make a video, but I upgraded the strap with a stronger one for 4 Bonkas. Will try to take photos of the whole layout - pretty simple arrangement actually.

Nice work on this. Hey, I’m curious what you put the quick release pin through at the top of the frame? I’ve come up with a similar (if not the same) system and then custom designed a 3d printable spacer for between the front and rear frame plates. It has a few features:

Curious how this compares to what you built to hold the pin in and what I can do to improve it.

Hi liaviator, I moved on, hand now have a different system. Smaller and a lot lighter/simpler not using a pin and grommets. The release loop/handle is a bit harder to reach on my left shoulder but I practice locating it in flight from time to time.

Hi Voltaire FYI I had a bonka fire last week in one of those bags. They do very little, next to nothing honestly. I had one bonka double wrapped in 2 of those same kind as what your using. I admit I knew the bags were not rated for such a large battery but I just wanted to be sure you were aware too.

In flight?
I also use the four lipo bags as one complete 2x2 unit with a handle to carry it around. Could you be more specific about how/why it happened? Did you balance/charged the batteries properly? Did you check the connections or wires integrity (vibration-rubbing against the frame’s sharp edges, etc… )? Were your batteries puffed to begin with? If after a flight, how warm/hot were they?
Thanks
Phil

Very interested to hear what happened here. In addition to Voltaire’ questions, please tell us:

Please provide any other detail or photos that you can provide - very important to this community!

I should have anticipated questions and put more details in my original post.

I made a mistake during setup, and the motor fell over while off my back. This caused one of the bottom batteries to become damaged. My setup is the same as glider-pilots with 2 batteries attached to the bottom.

I took the bottom 2 batteries off because one of the zip ties broke off of one of them. I admittedly didn’t think to check for damage and after I flew with the other 4 I place them all on the charger. I was there when it started to swell, and the zip ties made nice loud “POP” sounds when they broke from the swelling (good indicator). I had 2 batteries per lipo bag so getting the other one out in an emergency situation was intense. The fit was tight already with the mounting rails. Im surprised I got the other one out in time with the battery swelling so fast. After I got the other one out I took another bag and double wrapped it with the zipper open on both. And the fire started just after I got it to a safe place. I’d say it was a total of 90 seconds from the start of swelling to the flame.

Wow, scary! So you discharged them with damage to the pouch and nothing happened till you charged them? My understanding is that damage allows oxygen in and that interaction will start a fire.

How big were the flames? What do you think would happen if that was on your back while flying just over 20 mph?

I didn’t discharge them first. I charged them with the rest of the packs I used during the flight. They were already at 4.18-4.2 When I placed them on the charger. Is topping them off like that a bad thing to do?

As for the fire it’s very volatile. There was nothing left of the bags or the battery accept ashes wire and some very small pieces that blew away before being burned up. I’d say it wouldn’t burn through the risers or lines because there so far foreword, but those holes in the carbon fiber where the prop tips go would let in a lot of heat as well as any of the other smaller holes. The flames were not straight up, they shot out to the sides as if it was under pressure.

I used an entire (large) fire extinguisher and it still didn’t put it out. Although it was much smaller after that. The flames started about 4-6 feet high and 3 ft wide and after about 30seconds of burning I put the extinguisher on it and by the time the tank was empty the flames were at about 6”-12” high and as wide as the pack itself. It started up again and didn’t stop until the mass of the battery was all gone.

Maybe adding a layer of Kevlar to the back pad of the harness might make things safer.

Maybe a small steel plate or that concrete board could be placed between the batteries and the carbon fiber.

I’d didn’t understand the risk involved but now I do. 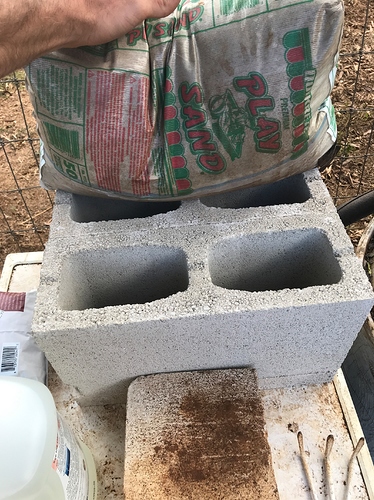 I might burn a few more batteries just to test things that the community wants to know. My first batch of 8 batteries I bought can’t handle the load so they’re perfect for this. If Paul would send me 2 carbon fiber back plates and if someone would let me borrow a thermometer I would test this situation. Here in Hawaii we have 15mph wind almost every day so I could test this sort of thing. Id like to have some help designing the test itself so that we can get as much info per burn as possible. Im wanting to test one battery in this charger I made, and another one that simulates a fire while being worn. Maybe I’ll use 2 for that and let one ignite the other.

This is why I made a battery jettisoning system on my Batch2. May not be the best but better than nothing. Hopefully I will never have to use it.