How about offset propellers motors?

You would need much more than an inch… the prop itself is almost an inch thick. If they were manually connected to spin at the same rate they could mesh like an electric mixer.

Interesting !
The shaft extensions could be ordered in different lengths to accommodate, no?
Cheers

What you would gain in efficiency from the larger prop you would lose from having more prop behind the pilot as well as the turbulence from the front props hitting the back props.

the motors appear to be more efficient with larger props- how about folding props like the drones?
remember these are no longer 48" props!

It looks like the concept I’m going to build (Paramotor Concept/Prototype) doesn’t have those issues. I’m going to use 26x8.5 propellers. I gotta find out the ideal specs for the motors though. Any suggestions?

The forward props will be spraying highly turbulent vortexs created by the tips, over an area of the outer rim of the thrust disc of the back prop. Exactly where is more efficient. So as GliderPilot said: maybe you will be loosing more than gaining…

I’ve been on and off lurking around this site for quite a while and still haven’t seen a particularly good answer regarding whether overlap would be a benefit, a wash, or a negative. Given the size of the propellers currently being used, a small increase in diameter and chord could result in a considerable increase in prop efficiency.

All of the propellers are already flying in turbulent air - the protective netting ensures that. They’re also in pusher configuration so they’re getting turbulent air off of the arms.

You’ll notice in @Beachbum s drawing that the overlapping props are actually moving in the same direction which I would consider beneficial in this condition because it will avoid a hard “slap” against air that’s been accelerated the opposite way. Trying to accelerate already accelerated air is a problem, but it will also be dispersing tip vortices generated in that area of the arc (this is likely already happening some on the current X4 design).

I’m not sure if my lazy drawing will attach to this post, but the eyeball calculation on a maximum overlap situation shows half of each arc of each propeller will experience some overlap, but the total area of overlap is less than one propeller swept area. In other words, <1/4 total swept area is actually overlapped.

Free-stream vs Slipstream. This is where things get interesting - a huge area of that overlap is in the slipstream of the pilot. At least 50% but possibly 75%. Are the propellers far enough back that re-accelerating the air will cause a beneficial pressure recovery? Is having overlap in areas of slipstream beneficial while leaving areas of non-overlap in free-stream air? How bad will the harmonics be from the blades going in and out of the slipstream and through areas of overlap?

It will probably take someone building one to actually find out, though if anyone has some fancy fluid dynamics software and the time to throw at it, it might give something of an idea. 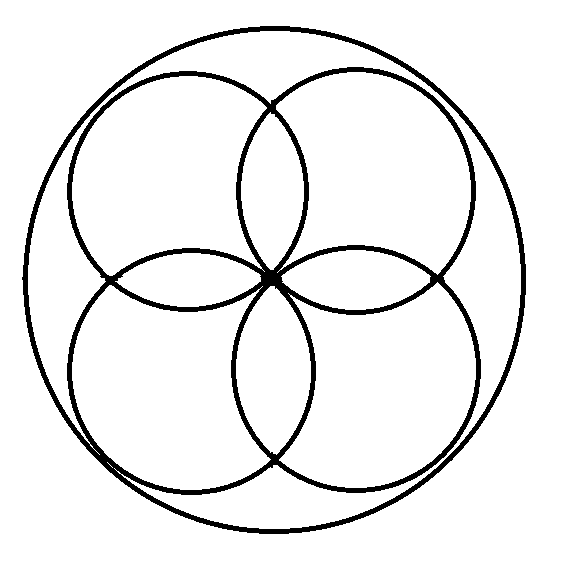 I think you’ve covered most of the issues I can see, including “probably have to build and test”, but I do see a few others.
(1) Having overlap only on one side – and that side in the lee of the pilot – may do annoying things to balance. (Is that what you meant by harmonics?)
(2) There were some mechanical limits on sizing because of the folding arms; you might run into practical problems having nothing to do with aerodynamics.
(3) How will you keep the props from hitting each other? Are you counting on the timing being really precise, or do you plan to use standoffs and assume the props won’t bend, or …
(4) What do you mean about the props avoiding a hard slap? My limited understanding is that part of the advantage of inline counter-rotating props is that they reduce the energy lost to vortices, and this seems like it should double up on useless swirls.

(1) - Yes, that’s what I meant by harmonics.
(2) - It would likely need to be re-engineered to retain the folding feature. There would need to be some relocation of holes, anyway. Lower Kv motors and all four mounts would need to be relocated - so it’s not a trivial change to do right. An enterprising individual could probably do some adapter plates to an existing setup just to try it out.
(3) - You only need to offset, front-to-back one cross-set of props (i.e. top left and bottom right, or top right and bottom left) to achieve clearance. I would imagine 1.5 - 2" would be necessary to ensure against catastrophic interference.
(4) - While the contra-rotating propellers “undo” each other’s spin, they do so generally with hellacious noise. Here’s a video of one: https://youtu.be/kbbRfaFaueQ?t=90 You’ll notice there’s some extra harshness in the tone.

If you want to hear the air being beat to death look up TU-95 Start on YouTube.

Some of the conclusion regarding overlapping props:

For a pair of overlapping propellers, power demand increases with the
percentage of overlap. The best configuration for overlapping
propellers was observed to be in a zone between 10% to 15%
overlap while keeping minimal axial distance. This configuration allows to use larger propellers or
decrease the length of the multi-rotor arms without decreasing the propulsion system efficiency. The overlapping configuration is also more interesting for propellers with a low disk loading.

My feeling would be that these tests were made under optimal conditions, and don’t account, in any way, for the turbulence and resistance caused by the centre mass (the pilot, battery, etc) sitting not far from the intended overlapping areas.

Generally speaking, we would be better served putting the propellers farther away from the body of the unit, but that’s sadly rather contrary to the goal of this thread

…perhaps distancing all the props from the unit itself could solve this issue, but may in turn introduce a new one. Just my 2 cents.

putting the propellers farther away from the body of the unit

Have you seen the Scott-e system? Folding prop, long tube - no cage: https://www.youtube.com/watch?v=wuhSRdffuDw

Much more of a standard looking design but using an offset tube to bring the propeller further from the pilot and the cage. At that distance you could probably safely eliminate the netting.

I have seen it before, and it does inspire some out-of-the-box thinking! The minimalism of this design is great, IF you are experienced enough to deal with added difficulty during forward launches, the lack of ground impact protection, plus an inability to easily demount the unit from your back (you can’t very well slip it off an stand it on the ground). In the video, you’ll also notice how a second person attached the prop once it’s already on the pilot’s back.

Regarding the second video - Whilst you can distance the prop to decreases the benefit of a netting, the cage would still offer benefits, and by losing just the netting itself, there’s not even a significant weight loss.

I think the frame is certainly necessary to retain (for both ground standing and safety), whilst the netting and ring add little enough weight to be well worth the benefits - thus we are back to the current design. My only hope is that a sweet-spot can be found in a hybrid of the two current designs, whereby we use a single or dual-motor setup to power a single-point counter-rotating dual-prop setup This would hopefully yield the benefit of the X4 (no torque), with decent efficiency of using less motors - it would also possibly require a smaller cage for the same pushing power! …In line with the original inquiry, it’s also the most extreme example of overlapping props

Being able to get rid of the netting is for the drag and not the weight. Small lines have a coefficient of drag > 1.0 so their small frontal area is amplified. Many PPGs do not need the netting for direct pilot safety but to avoid having lines go through and get caught by the propeller.

The ring guides the lines up and around the unit on launch. The Scott-e system can clear the lines without one because of the folding prop but if the pilot were to blip the throttle before the glider is up and clear it would be disaster. It’s definitely an edge case and you’d want the ring for a “daily driver” or you’d be tearing up gliders left and right.

I’m surprised to learn that the netting causes so much resistance, with that in mind it must also cause turbulence to hit the props (and additional noise). Has anyone actually flown their X4 without the net… is there a discernible difference in noise or efficiency?

It’s disappointing to hear that counter-rotating props are so noisy, is that still the case vs 4 props? (I can understand it being louder than one!) Does it make much difference to distance them? Torque-steer-free flight has been an unexpected delight, so finding the best way to achieve this is still a priority for me.

I’m a big fan (no pun intended) of the X4 design, for the aforementioned reasons. Since owning one, torque-steer has become so much more apparent whenever I go back to flying my old machine. I’d love to try a four-way un-pluggable folding-props set-up, adapted for the X4, so I could possibly do away with the netting… I do however suspect it would be necessary to up the cage-size for it to still be effective. I dread to think how easy it might be to catch a line during a collapse, with these extended prop shafts, but then nothing we do in the sky is without risk.

that counter-rotating props are so noisy, is that still the case vs 4 props?

Well - compared to the 4 prop, a twin concentric contra rotating setup will likely be quieter and overall lower in pitch. There would be two props making sound, with a possible “beat” if they’re free rotating, plus a secondary harmonic two times the rpm (from the trailing propeller intersecting the wake of the first). Could be entirely acceptable. Like a lot of speculation - someone might just need to build one to find out.