Any way we can program cruise control into the controller?

Funny you should ask because I was just working on that. It’s not ready to be used yet but I’ve been testing it on the bench and making good progress.

Heres the branch for what I have so far - 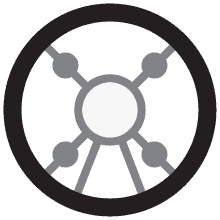 Arduino logic for throttle. Contribute to openppg/eppg-controller development by creating an account on GitHub.


Essentially it works by holding down the side button while the throttle is held down. A tone will play letting you know cruise has been activated. Then you have (currently) two seconds to let off of the throttle, you’ll see why in a second.
Cruise will hold the current RPMs/last throttle position until it is deactivated.

How is it deactivated?

All above except disarming kick it back to “normal” mode where the throttle input directly drives the motor speed.

I’ll have to do some testing around deactivating cruise on low battery. The batch 3 sensor and logic is susceptible to battery sag so we’ll probably have to figure that out first.

Excellent. I would love this feature

A few thoughts. I would remove the max reach time for production. It would be very scary to go from cruise to zero throttle all of the sudden without warning

Another feature to think about is micro adjustments once cruise control is activated. Sometimes you need to micro adjust up or down to find the correct throttle for level flight. It. Would be great if you can micro adjust up with the top button. And down with the side button. Either by single click or. Double click

Thanks Dario!
My reason for the max limit comes from the Tesla autopilot trigger that will disable it after a few minutes with your hands off the wheel. Perhaps pressing any button would reset the timer. I can also add vibrations and a tone the minute leading up to it being disabled. Id just want to make sure pilots are attentive and keep the throttle in hand.
Maybe pilots falling asleep on a cross country will be a bigger deal when we have longer flight times

Looking forward to this feature!

I think a minute of warning sounds a bit too much. If the throttle is buzzing and beeping for 15 seconds and you don’t notice I don’t think you’ll notice for another 45 seconds either.

You can start the buzzing and beeping off slowly and as it comes closer to the cut off it gets faster and faster to get more attention.

Is there any update on this feature @zjwhitehead ?

No major updates. I have some code out there but haven’t been flying much lately (winter

) to test it.
There are some other features I’ve been experimenting with though