Charging times and power input for the batteries

thanks in advance for your help

I’m looking for this info as well. How long have you guys found it takes to charge from ~80v to full on the 4kW battery with the US 110 stock charger?

3.5 - 4 hours to fully charged from 86v, just depends on what the charger decides what amp rating it wants to charge the battery.

The amperage of the charger can be adjusted. In cooler weather ( under 70f ) I have ran the charger as high as 14 amps, which gives a full charge to the 1 hour battery in 3 hours flat from 80V.

The 1/2 hour battery is interesting, It will charge on stock amperage (10a) settings in about 2.5 hours, but the issue with that becomes that it warms up enough that I can’t fly it right off the charger.

The new bluetooth BMS has temp cutoff settings, and if you charge the battery up from dead, by the time it is fully charged it usually is around 28-30C. Taking off with an already warm battery risks hitting the thermal cuttoff shortly into your flight. This happened to me about 12 minutes in.
Technically this thermal cutoff which is set at 60C can be adjusted, but you certainly shouldn’t adjust it up.

I do one of two things, let the battery charge up, then let it rest for 1 hour before flying it. Or I set my charger to 8 amps or less which takes longer to charge the battery but doesn’t warm it up past 25c. and then I can fly it as soon as it is charged.

To follow up, I think the 1/2 battery struggles with heat for a few reasons.
1: it is fewer cells so each cell experiences higher current draw and higher cell impedence as a result. This warms the 1/2 hr pack more than it would the 1hr pack under identical conditions.

2: The 1/2 pack uses foam on the sides of the cells to take up the extra space within the pack due to fewer cells. This really should be done some other way. Either manufacture a different housing that is slimmer, or maybe orient the cells in such a way that they still have full surface contact along the outer perimeter of the housing and the “blank space” is a void in the middle of the pack.

3: As newer cells are available, choose a cell with lower cell impedance under high load. This will result in a less heat being generated within the pack, and as a result less energy loss and thus longer flight time. Ideally for a 6P pack, you would want under 12mohm at 50%soc capable cells.
If sub 10mohm cells become available you could even build “super feather” 4P packs that would make the SP140 the lightest flight capable paramotor ever.

The amperage of the charger can be adjusted

How’s that? Do you have to open the case and turn a pot somewhere? Thanks for all the detailed info much appreciated.

Curious how do you adjust the charger output amps?

Yes. Exactly. It’s located near the front of the case. Carefully opening it because there is heat sink paste all on the sides of the case.

I’m not near my charger at the moment but if someone posts a picture of the case open I’ll identify the pot.

So, I scrolled around my phone and found a picture from February when I had initially discovered the adjustment pot. It’s this forward most one circled in red. 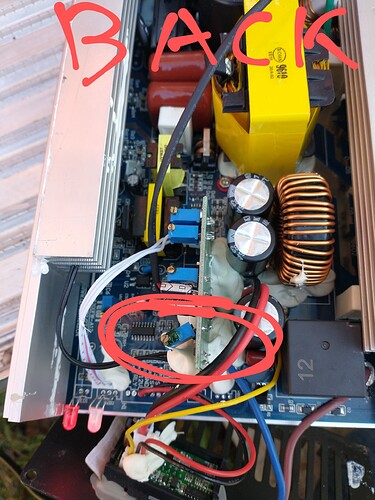 Don’t mess with any of the other ones, the control the charge profile and max voltage. If you screw with them you risk ruining your expensive battery or causing a fire.

I decided to experiment with tweaking my amperage for a few reasons.

As a side experiment I decided to see how high it could go and was willing to risk my charger for the cause. I went up in 1 amp increments and observed the temperature of the circuit board components. I got up to 14 when it started to feel hotter than normal. At 14.5 it tripped the breaker for my recepticle.

Thanks Evan, but this battery doesn’t frighten me any more than the 24 volt, 400 amp hour lithium ion pack that I custom-built for my off-grid power system. And that’s under my bed too!

Being a wet blanket, lol, I’ll need to remember that one.

I didn’t think a “disclaimer” was needed on a DIY aviation forum, it really should go without saying that you take on the risk of what you may damage by opening the charger, including yourself !

Also, my own opinion is that the 10a charge rate is just fine, I don’t see 99% of users would benefit from messing with it.
Can you cut down your charge time by 30-40 minutes by messing with it? I guess, but your still waiting 3 hours instead of 4. And now you’ve voided your warranty.

As a side note I have procured all the parts to build a monster 40a charger which could charge in under 1 hr. But to use it I would need to find a way of cooling or managing the battery temperature during charge, and a place to actually plug it in. Even a 30a RV outlet won’t cut it. Would need a NEMA50 type recepticle… Which I don’t have .

Yeah, I’m fine with the charging time and definitely don’t want to void the warranty or burn down my garage. I’ve been pretty lucky with not burning up any RC lipos for the past 12 years and don’t want to start now by killing a $1800+ battery.

just as a hint. li-ion batteries are fundamentally not capable of being charged quickly without liquid cooling, e.g. for premium e cars. Furthermore, in recent years it has been shown that batteries for air sports, motocross, etc. are charged quickly. This makes absolutely no sense, since the heat from operation first has to be dissipated slowly because of the insulating housing. that is, it makes more sense to let the battery cool down for a few hours and slowly charge it again in 2-3 hours. better not charge until the next day and if you actually fly that much better to use 2 batteries.