Can someone explain Batteries For Dummies?

A few battery questions from a complete newbie to things electrical:

PS I am reading the hobby shop link, and I now know that 8S1P means 8 cells in series, with only one cell in parallel. They battery is full at 22Ah, and can safely produce 25C (25x22 amps) and produce 50C for short bursts (50x22 amps). If that’s true, then that means the battery would discharge in 1/25th of an hour (2 minutes) without bursts. That doesn’t sound right.

What charging rate applies? If I have a 1C charger, does that mean my Bonka battery will charge at 110 amps (5x22), and thus, take about about 12 minutes (1/5 of an hour) to charge? That doesn’t sound right, either.

Sorry; All this really has my head spinning.

Ok, so here’s what I seem to be missing: What amperage does the motor draw to fly level and to climb? To put this in a gasoline motor perspective with my motor/wing, 8000 rpm will produce about 155# of thrust, which will in turn produce an approx 600 ft/min climb rate. 6000 rpms (about 3/4 of that RPM) will give me level flight.

So, my wing flies level with about with about 115# of thrust, and climbs about 600 ft/min with 155# of thrust. Those are rough numbers, of course, but how would that relate to the 50C and 25C mentioned on the Bonka battery case?

The system is designed to run with 12 LIPO cells in series. When fully charged that’s 50.4 volts. When discharged that’s about 40 volts.

The Bonka battery packs we use are 6 cells in series so we have to connect 2 packs together in series to get 12 cells. That gets you the correct voltage which in turn gives you the maximum thrust that the system can put out. However, 2 battery packs can’t handle the amp draw without overheating. Therefore, we use 4 packs and connect 2 packs in series and 2 in parallel (remember that each pack has 6 cells so that’s 12S 2P cells).

The bigger the cells and the higher the C rating the colder the batteries will run. This is important because when batteries get hot they get damaged and if they get too hot they can explode. So the C rating isn’t about RPM but rather what amp draw they can handle without getting damaged.

If you charge a 22 AH battery at 1C it should take about 1 hour to charge at 22 Amps. So if it has a 1C charge rating you shouldn’t try to charge it faster by using higher amps.

Ok; That was really helpful. Thank you.

How many amps do all four motors draw at full throttle? Someone in a thread below measured 75A at 50V at full throttle. If we have 12S2P, that means we have 44Ah at 50V (and roughly 1.75C for full throttle for the parallel configuration). Does that mean we have roughly 2/3 of an hour at full throttle at well below the 5C rating. Is that right?.. or at least ballpark?

Is the thrust versus current draw linear? In other words, is 3/4 thrust approximately 3/4 of that 75A? Or, is that some kind of non-linear curve? Few people cruise at 155# of thrust… so I am wondering if the length of flight might be longer for a cruise.

I seem to remember from the hobby site that batteries should be charged in series… that it’s unsafe to charge in parallel. The Bonka site says 1-3C rating (5C max) for charging. Is it possible to charge all four batteries in series at once? Would that be 22-66 amps at 100V? That sounds crazy, but is it correct? Are there such chargers? Or, are the chargers limited to 50V? Or, are they limited to 25V?

Question is, do I have to charge 1 battery at a time for a total of four hours… or 2 in series (50V) for an hour, and then another 2 in series for another hour?

One last question: I see each battery weights 2.52kg and measures 195x91x66mm. That’s about 10Kg for a battery load, and that size has to fit between the legs in a 2x2 configuration, I imagine. Does the frame have brackets? Or, do we have to manufacture something ourselves?

Thanks again for any help.

The batteries have a balance lead that the charger uses to keep all the cells in a pack at the same voltage. It charges the whole pack through the main wires and discharges individual cells as needed to keep them balanced. If you try to charge multiple packs in parallel the charger won’t be able to balance the cells properly.

The batteries strap to the back of the assembly. 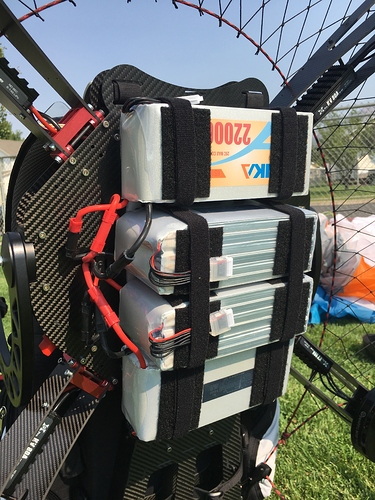 That keeps the weight up high. Looks good. And fly for 45 minutes, charge for an hour or so, and fly again sounds like a good day.

Still looking for answers on current draw. Is 75A about right for full power? Is the curve linear for lower throttle levels?

How much does a charger cost?