With an SP140 on preorder, I figured now is a good time to learn a bit about lithium ion batteries. I’ve seen a lot of different info, some contradictory. I’m wondering what are best practices for long battery life and good performance.

So would it be best to leave a unit uncharged until the day before flight? Then slow charge (will SP140 charger support that?)

Any other tips for long battery lifetime?

My plan is keep it stored at 80-90% and charge to 100% the day before or day of flight. If you don’t end up flying, just run the batteries down 10-20% so it does not sit at full charge for long periods of time.
Just don’t put the batteries on a charger when hot. I’m hoping the BMS has bluetooth so we can monitor temp. Time will tell.

So would it be best to leave a unit uncharged until the day before flight? Then slow charge (will SP140 charger support that?)

from what I read it’s a ~15amp charger. the charge rate across 9-11 cells will be low. so sounds like a slow (safe) charge rate.

I’ve never purchased anything this big without so many unknowns. it’s making me nervous!

I’m curious to know more, but the current tesla chargers will give over 11kw of power, but they do require a professional installation. If it were the right voltage (it’s not), it could theoretically charge an sp140 battery in 30 minutes assuming the bms would allow.

I think a more realistic option would be to have a charger that runs off a 220v outlet. Theoretically you could pull over 5kw from it and charge an sp140 battery In about 1 hour.

This would be ideal for flight schools. This is exactly what Pipistrel has done with their Velis electro aircraft. It flies for one hour and their batteries can charge in one hour with 5 min time to change out the batteries. So their aircraft can be continuously flown in flight schools. When you take your ppl or paramotor license you do it in usually one hour lessons at a time allowing the flight school to continuously use the aircraft.

Not as important to charge quickly for private fliers who can wait an extra hour or two to recharge. Or buy a second battery and charge both up the night before.

Interesting. Tesla superchargers can fully charge a car in 75 minutes or to 80% in 40 minutes and they are claiming that their v3 charger can charge a car at twice the speed. At the same time their model 3 and Y is using 21700 cells only rated at about 15 amps and their model X and S 18650 cells are only good for about 10 amps. So how can they charge their battery so quickly without much degradation and using high capacity cells?

how can they charge their battery so quickly without much degradation

They have an active cooling system and a very sophisticated BMS. Also the battery is huge and derated. I.e. they only use a portion of its potential. Note that the model 3 and Y do not advertise the battery capacity as they did with the X and S. If we could suffer the extra mass of cooling fluid and carrying around 30% (a guess) more battery than we use, then we could charge faster and retain cycle life.

That still doesn’t change the fact that Tesla is charging their model 3 battery at 250kw! The long range model 3 has 4416 cells so they are charging the battery at a peak of over 15 amps per cell. (It also means that the battery is a hair over 77.9kwh) On top of that almost every Telsa model 3 and Y battery lasts between 300,000 and 500,000 miles which means that on the low end they are lasting 1,000+ cycles and on the high end over 1,500 cycles. My question is, how can they make a battery lasts that long and still charge it at 15 amps per cell.

Now I have personally played with tesla model 3 cells and can say that they have many weird features that no other cell has, but even then I would think that we should have been able to find a way to charge a cell rated for 45 amp discharge at 5 amps if tesla can charge a 15 amp discharge cell at 15 amps.

The charge curve lowers as is approaches full charge. they’re capable of cooling the cells as well. it’s 250kw from 0-25% ish? then drops significantly. 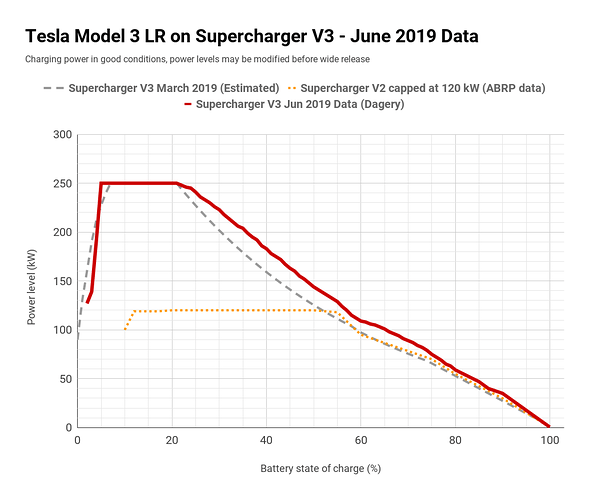 1031×875 59.1 KB
heat kills cells.
I’m not aware of off the shelf BMS for small batteries that have this charge curve built in.