I would like to give a hint here for everyone who uses Li-Ion packs for eppg.

Li-ion cells work in a very large temperature range without any problems. If, however, a high cell temperature is very often reached under heavy load, the possible number of cycles goes back very far. That means the cells die much earlier.

Some EPPGs have temperature sensors (most KTY 81-210) in the battery as standard, which then show the battery temperature on the display and also provide the esc to reduce power, or cut-off /depends on settings.

If you don’t have that, you can install a temp. Sensor in the battery to watch how hot the battery is while flying.

You can also use ready-made sensors with displays from the barbeque area, or technical area. It doesn’t have to be complicated, it just has to work reliably. So that the display can stay on the motor / frame, the system can be made separable with a plug connection. here in the picture just an example of a cheap, simple solution: https://www.amazon.de/Thlevel-Thermometer-Temperatur-Kühlschrank-Gefrierschrank/dp/B07TY6HRL4/ref=asc_df_B07TY6HRL4/

I was hoping to have something like this built into the throttle.

Cool Idea Thomas. I like it. Was thinking of using those color reactive aquarium/terrarium strips and a mirror. The two stroke guys check their fuel level with a mirror. I could check my battery temps with a mirror. Or even just fly the ■■■■ aircraft. When I was flying 4 Bonkas they got just warm enough to feel good to cold hands after I landed. With 8 they don’t even get that warm. It would be interesting to see how warm they get during that 5 minute full power climb out though. Seems most of these go to 34C but some go up to 40C. 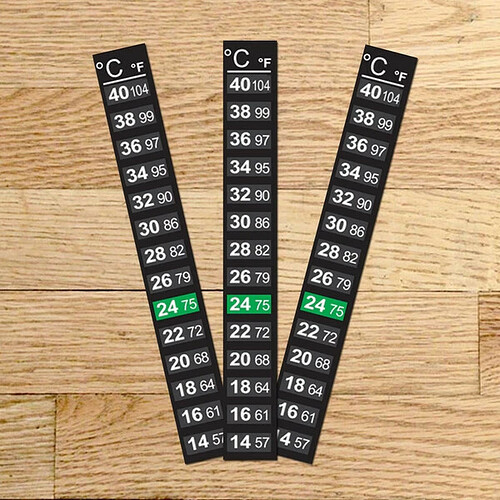 to explain it more precisely: the temperature sensor must be placed exactly in the center of the battery pack between the cells, since this is where the highest temperature is reached.

this is how I do it and many others have been doing it since around 2013, some earlier with the sony vtc 4 cells.

series manufacturers also initially used the mainboard temperature of the bms as a value. However, it turned out that this is not optimal because it can deliver incorrect results.

therefore it is best to always measure between the cells. many esc also have a calibration function to set the actual value to exactly 1 degree celsius according to real temperature.

my recommendation is not to heat the pack more than 55 degrees celsius in flight. then you can enjoy it for many years.

if you have a setup as an example, a trike with a 10 kw / h battery you don’t need any monitoring because the cells can only reach 40 degrees celsius in summer. but from a safety point of view it is still good to see what is in the pack for temperatures.

I therefore have additional batteries everywhere, temp sensors and voltage controls in addition to the main display. this is particularly important to me when i fly at 2000 meters above the ground.

It would be nice for the BMS to have bluetooth and have multiple pages you can swipe on the throttle screen to see temp, low/high cells.

I could see a micro controller that you connect the ESC, temp/BMS data to the throttle screen to get all the important information you need.

they have the similar connector the SP140 uses except it also has 4 pints and has higher amp capacity:

I found the highest was at the negative end. usually comes with two temp probes, so one at neg. and middle usually is where I put it.

in a standard li-ion pack the cells are arranged alternately. always - to + to achieve a series connection. therefore the heat is distributed evenly. The measurement in the middle is therefore the most important, as this is where the highest heat value is achieved. on the outside, the pack loses heat due to radiation.

thanks for the picture! new connectors allways welcome:-)

Hi… where do you get these connectors?

here is a picture from the e-foils area from the forum.

this is how it looks when a small battery with 2 kw / h is ignited by a faulty bms. I just want to show that you should always think about it when you decide to buy or build a battery, whether you trust the product. 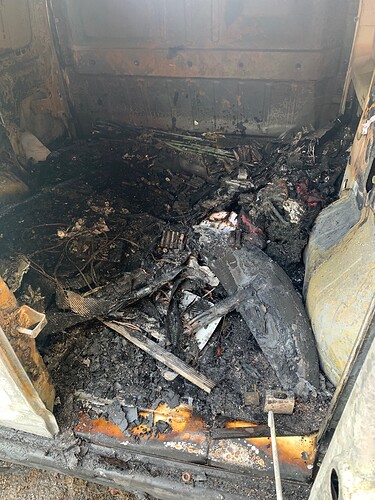 the UN test is extremely tough on the test packs. with extreme situations that actually never occur in the application. therefore you can be sure that the material used is absolutely safe.

even if you are one of those pilots who only fly low and think you can land immediately. As you can see in the picture, if a battery is built with cheap china bms, it can burn in seconds while you drive your car on the highway. or it is in your garage and burns at night.

this time it wasn’t a diy battery. around 2 kw / h this time it was a series battery from a medium-sized e foil manufacturer who builds batteries in china for the foils. the battery ignited shortly after the journey. since a lot of energy was already consumed, the fire was no longer so violent. in this case, if someone had flown it with eppg and maybe 300 meters above the ground, it would have been his death sentence. always remember to check your equipment before you fly. 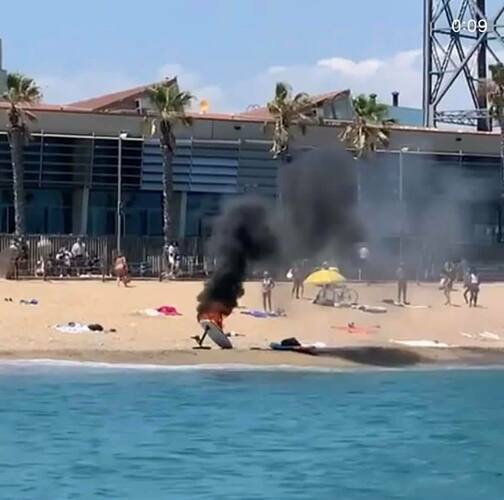 I do not understand why so many fly with EPPG and also with Foil without a temperature warning of the battery. every cheap motorcycle has a temperature display for the cooling water or oil temperature. It is probably more important that parts of the rail are not damaged than the safety of a human life. If you have a temperature display and maybe an additional warning tone when you cross a limit, you have more time to react if something actually goes wrong. just my recommendation for everyone who cares about your safety.

@Pdwhite do you have the BMS specifications? number of temp sensors, cut off temp etc.?