Watch on YouTube. I hope you will enjoy it.
Phil 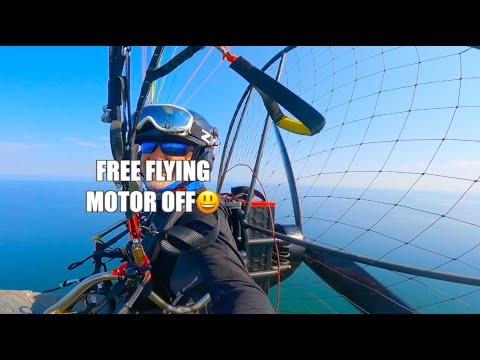 Thanks for posting it! I like to see the nice calm low-power flying

Most welcome Evan! More of them to come.

Yes, thx Voltair for the vid.

I like your thinking eagleuh1 regarding regenerative charging. I think the flight motor would have to somehow turn a charging motor. Not sure if this could be done efficiently enough to generate voltage greater than the potential voltage lost due to the added drag on flight motor. Maybe a bit like robbing Peter to pay Paul?

I was wondering about the possibility of leveraging the airflow created by the forward motion caused by the prop, and have that airflow spin a smaller prop to generate electricity. Where that charging prop and motor reside I don’t know. Then there’s the added weight issue. Anyway, fun to noodle on.

Less is more has always been what I go by in life. Yes the three blades generate more resistance but I am fully aware of it when flying a small wing (20m2). I could use two blades to reduce the factor and drop the propeller size but like the three blades. Yes, the drag factor will also increase if I make steeper turns which I do not do often. I can slow the prop to zero if I use a size M wing and do not pull stupid stunts. It all depends on one style and feels that day. There is tradeoff to be made regardless and that’s fine by me.
I can do ridge soaring with a PG size M wing without the propeller spinning and it is great. I had a couple extended soaring flights in the past, one with the X4 and one with the SP and landed with 90% in the battery after starting the flight from the beach at around 95% capacity. In my situation, I am not looking for extended powered flights as much as others. Indeed, it would be great as you wrote, to be able to refill the batteries in flight and keep going😆

Not having flown one yet (my order went through today) but I was thinking about how an eppg might be able handle some things better than a gas engine.

Obviously we have the advantage of gliding or soaring with the motor off, without the fear of not being able to restart it. But the windmilling prop will be causing some drag, both from the solidity of the prop and the magnetic losses of the motor.
So my idea was to keep a really small amount of power on when gliding, less than 100W maybe but enough to keep the prop turning faster than the wind speed.
Basically sacrifice a little battery energy to improve the glide slope. It should still be almost silent!

Second thought… when landing you probably want the prop fully stopped. This would prevent any mishaps with fingers or lines if you have a bad landing, or from the prop hitting the ground. Have the ESC brake the prop fully, maybe when you hit an emergency stop button or push the throttle out beyond the normal off position.

Anyway, just thoughts, might be irrelevant once I’ve actually flown it

As far as regen goes. I don’t think you ever really have excess height or speed to burn off as you do in a car, or not enough to be worth charging back into the battery. And JeffG I think you are talking perpetual motion there!