18659 Lithium Ion pack for this system

Has anyone built or thinking of building an 18650 pack for this paramotor? If so what did you build and how is it performing?

I’ve been researching this for a while now and have come up with these numbers using either Sony VTC6 or Samsung 30Q cells, which have 3000mah capacity and 15A continuous current, 30a peak.

A 13Sx23P pack would have the following specs

Additional weight of connectors/wiring estimated to be .03lbs per cell = 9lbs = 30+9= 39lbs for battery pack.

The bonkas seem to be slightly lighter per AH when you add in the connectors/wiring for LiION pack. But LI ION is a safer pack to fly with, and most likely will last 2-3x longer then LiPo packs. From experience with 6S batteries on hexacopter they only seem to last a couple years until they start to puff up. Taking Li ion pack 39lbs/69AH= .56lbs/AH, bonkas 44.8lbs/88AH = .5lbs/ah

Cost, Li ion pack will cost more up front but since they last longer the cost is less in the end. My findings for Li Ion pack with Samsung 30Q batteries would be $2.90 per cell from alibaba seller x 299 = $870, shipping $200 = $1070. Plus connection cost, BMS this price will vary greatly depending on how you chose to connect batteries together, ie spot weld or Vruzend type connectors.

I’m still researching BMS’s and if they are even needed. Some people say definitely, other say not at all. My thought is that it would be better to use a BMS only for charging the pack and not for discharge, there are a couple BMS on alibaba that can discharge up to 300A but my worry is that this is just another failure point in the pack, might be better to directly discharge off the pack instead of going through a controller to do it. Using a BMS only for recharging the pack will save some weight and reduce cost.

Thanks for that link very interesting read! I’m mainly interested if anyone has actually tested a li ion pack yet on the system?

I will post my findings and the process of building my 18650 pack once I receive all components.

Vruzend tops out at around 3.5-5A per cell so not a candidate.

Take a look at DIY e-bike batteries or DIY powerwall construction for a LOT of discussion, all the same concerns apply here with an additional consideration for weight.

I agree with your concerns about using a BMS for discharge.

I lean towards spot welding with cell-level fusing and using a leveling charger on the ground instead of relying on a BMS in-flight.

Jehu Garcia has years of youtube videos on various 18650/lithium based projects.

He has some snap-in powerwall designs that might be suitable, but they are still in development and you’d have to run the numbers yourself on the added weight to see if they make sense.

Check out these links for ideas:

Yeah I’m thinking 18650 pack is most ideal. I recently discovered Jehu and have been glued to YouTube. Pretty awesome videos he produces, certainly best li ion source of info out there.

Have you seen Vruzend v2? They are rated for 20amp continuous. The one thing I do like about bms is that it will monitor the temperature of the battery pack with multiple probes so it could potentially save your $1500 pack.

Will be nice to monitor battery stats during flight on the phone via Bluetooth.

Let us know how it goes.

I had not seen the v2 vruzend, I’m glad they improved the system.

The cost and added weight aren’t ideal but they do look easy to put together.

I imagine fusing it will be pretty straightforward if you alternate rows of bus bar with fuse wire throughout the pack but when using new quality cells that’s not strictly necessary.

Curious to see how your ground testing of that BMS turns out after 5-10 minutes of peak current.

I’ll post my findings in the bms and battery pack including the Vruzend connectors. Few reasons to me why the Vruzend system is appealing:
First is you are not putting any heat on the cells so there is no chance of damaging them.
Second is it’s modular and much easier to replace a string of batteries or a few if they go bad, not so easy on a spot welded pack.
Third is the connection for power off the pack is much better, a bolted connection vs a soldered connection of a heavy 8awg wire is much nicer in my mind and should have better flow of power.
Fourth is that these connectors can potentially be reused forever, vs spot welding you buy the nickel plates, spot welder, holders for the cells, this is all throw away after the pack is dead. I will also build a cage for the pack that squishes the heads on, maybe use thick plastic board to do this so there’s no chance they can come loose off a cell. Vruzend recommends this on their site. Now I just need cells and batch 4 openppg!

I am following this thread, and I am interested in your build.

It seems that if you have to go through the work to build a cage on top of the Vruzend system, it might not be much more work to design a similar system from the ground up. I envision the OpenPPG Battery!

It seems like someone could model a 3D printable grid of “cups” for the tops and bottoms of the batteries. The cups would include slots to hold the connectors. The battery assembly would be making a sandwich of carbon bottom plate, bottom cups (with connectors), 18659 cells, top cups (with connectors), carbon top plate. The plates would be connected to each other using spacers and screws similar to the OpenPPG frame, and that would keep the cells securely in place. Throw some carbon sides on, and it could be a fully-enclosed battery box.

This system would be super easy to replace cells in. The top and bottom cups could have polarity markings on each cup to make it brain-dead simple to assemble.

Most of us would be using the same number of cells. We could find a manufacturer that can print high-quality top and bottom cups. I’m guessing the overall grid size would be too big for most hobby printers.

I would love to buy an OpenPPG Battery kit.

Received the BMS today, didn’t expect it to get here this fast, only took about 10 days, when I order it said up to 58 days to receive so this was nice surprise. It looks good, nice solid copper bus bar from what I can tell. Still need batteries, charger, vruzend connectors and openppg batch 4… 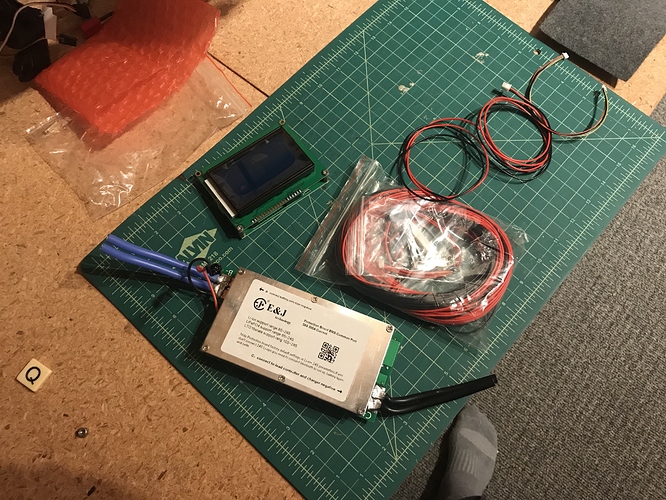 Hiya Dzubot gotta ask and will say sorry if this question has already been posted and answered , will the Vruzend kit now handle the kinds of discharge current we need in EPPG’s,
I understand things may have evolved or changed but at one stage not so long ago the coconscious was that they are great but would not handle the 150 -300Ams potential draw for EPPG’s ?

The V2.0 Vruzend connectors can handle the amperage, they are rated at 20A continuous per cell. So you would only need to make a 13s15P pack to meet the 300 amp requirement. I plan to build a larger pack so there is less draw on each cell and longer flight times. Most likely will build 13s23p, which would be 299 cells and at 300amp draw that would only be 13amps per cell with this size pack. However Vruzend is coming out with a newer version of connectors, they recommended I wait for, I do not have any details of what the difference will be with these new connectors but i’ll take their word for it that I should wait for the newest version of connectors for this high amperage draw pack.

Hi Dzubot
Many thanks for the tip and the promising news, The Tech moves forward and nice to know there may be hope for this option soon. Cheers