SONY VTC6 18650 Batteries are ordered (similar specs to LGHG2). Now to decide how to best configure the batteries.

I have 600 batteries and trying to determine the best build combination. The goals:

Ideally I’d like to use the new BMS system on the OPENPPG Batch4 but I’m not sure it will be setup to handle 14S batteries. building 7s batteries just means more connectors, new charger, but I guess not end of the world, just more money.

Does anyone have more details on the BMS and what it supports? does it have temp monitoring? I was actually planning on building my own BMS with the TI BQ series chip but I want to get in the air as fast as I can with enough safety.

I might build a separate circuit that will monitor battery temp and eventually rebuild the throttle if I need to with a second display.

Hi
As the batch 4 is made for 2x7 s,(14s) so the bms has also been planed for 7 s but it was not in batch 4.0 becouse it would have taken to much time to build it, so hope for the next batch.

After thinking about it all day, it might be really hard to make it modular. I’m leaning towards two 7s23p (should come in around 38lbs) and good for 69,000mah. it will be 7S and be able to connect to the OpenPPG BMS.

I have this monitor which is very accurate ($40) vs the cheap ones. I could grab another and be able to monitor the cells if the BMS isn’t ready for next batch: https://www.banggood.com/ISDT-BattGo-BG-8S-Smart-Battery-Checker-Balancer-Receiver-Signal-Tester-Quick-Charge-Function-p-1177825.html?rmmds=search&cur_warehouse=USA

If you can think of a better way i’m open to ideas. 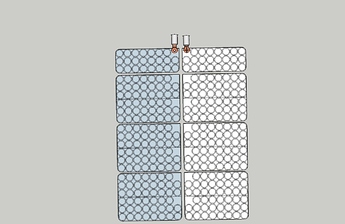