Water Landing? What would happen?

Hi martin
Think you had less volts and empty batteries?
Friend of mine had a very popular drone, he started last year from a chartetboat and the baterie died after 1 minute, so the autoland funktion kicked in and the drone landet into the ocean beside his boat.
He was able to recover it from 5 meters and he used non satwater to flush it.
After about 10 minutes the empty battery startet to smoke and he was very surprised and unsure what do do with it over the next hours…
If he had let it alone maybe the yacht would have catchet fire too.
Here it was also a very small low voltage empty battery - think about the 4 bricks fully loadet here used…

But if nothing can happen i would be very happy about becouse i want also to use the system and would feel much better flying over water when there would not be the fire and expolsionrisk i expect.

I will try to build a cutaway system for the bateries with 2 3 ring systems and 2 kableconectors that will let the bateriepack go if activatet.

Just want to be able to throw away the bateries in flight at any time.bevore a hard landing is expectet.

I was in Mexico for the first PPG Guinness Book of World Records to have the greatest number of PPG in the air at the same time - it was fun. The day before, everyone was having a good time and burning gas practicing. I was flying the lightest machine at the time (DK “beat” from Japan and was doing touch and goes on the water beyond the 6 to 8’ rough surf line. A few of us were doing that, and at the time we were not thinking too much about water landings and the dangers associated to them - the sport was too new and we had never heard of anyone drowning with a PPG before. Little I knew, I was flying downwind at about 70/80’ over the water on the other side of the crashing white wash when I ran out of gas, Oops! I quickly realized that I would not make it to the beach and immediately disconnected my single chest strap buckle and the two leg buckles. At the time, the “Safe-T strap” invented by SUPAIR later did not exist, and the smaller upper strap keeping the shoulder straps in place was not either. It was a quick “Clicl! Click! Click!” disconnect… I dumped my right throttle and moved my ass to the edge of the seat-plate while steering the wing left toward the beach. As soon as I flew over a curling fat wave, I jumped, and clearly remembered seeing my seat passing me overhead before I was swallowed by the crashing water. Felt like I was trapped in a washing machine for a few seconds before being thrown on the beach. No harm done as I was walking on the sand looking like a wet dog. Three people came to my wing’s and PG rescue. Filled with water, it took them quite a bit of strength to bring everything to dry grounds. Each retrieving was dragging the glider back and away from the beach - imagine getting stuck in your harness and lines after a water landing and without a flotation device

With a few friends help, the wing was washed in the kid’s fresh water hotel pool and dried in the shade. Amazingly and due to a Japanese style design, the carburetor, cylinder, a sponge oiled sealed air box, did not took water in. A few hours later, I poured fresh gas in the tank, gave two pulls and the Boxer engine was purring again and i was back in the air that evening. Luck was on my side that day, and I learned a valuable lesson, especially that I fly near the seashore year round in NY. This is the motor I went in with. I have to say that little machine was indestructible and plugged over 200 hours on it before I sold it https://www.youtube.com/watch?v=t2gjlLv53fs&t=9s
At the front is the wing that went in the day before 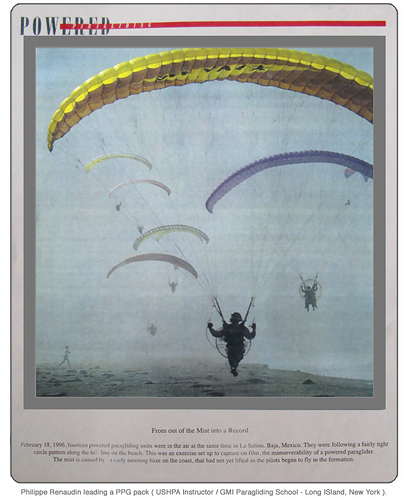 Anecdote: many of the PPG at the time were using farming water pump motors at the time - they were the only ones we had, until dedicated PPG engines were eventually designed for the purpose. The Zenoah motors were #1 and an average PPG set-up with this motor weighed up to 82lbs without gas - you blew three takeoff and the day was over

There is a tandem PPG to the right of the photo which was using this motor). Not exactly certain, but I think we managed to get around 26 PPG in the air at the same time.

Around 2005 I was climbing out over the Gulf of Mexico and hit the kill switch. Way to low to turn back I quickly unbuckled and flared before settling in the water.
The wing flew over my head and landed leading edge down, remaining inflated.
The motor was climbing up my back, forcing my head forward.
I was treading water, holding my breath, raising my head, catching a gulp of air now and then.
Maybe a minute or two passed and it was getting more difficult. Lines were clear over me and out in front, glider still fully inflated.
I remember starting to get a little worried as I wasn’t just treading water, but fighting the force of the motor.
Just as I started to really struggle, I felt my foot lightly graze the bottom.
All the time the glider and I were drifting towards the shore.
A few more seconds and I was standing on the bottom.
I took the motor off and walked it to the beach, the glider still inflated.
Rinsed the motor out with 2 gals Seafoam.
Put the glider in the tub with mild soap.
Elisabeth inspected it and I was flying within a few days.
Wear flotation on you.
The tank might be your worse enemy!
John

Hi john thank you for sharing
Do you mean the batteries or what tank is our worse enemy?

I’m guessing John meant the gas tank can be your enemy. If it’s empty of gas, full of air, it’ll act as a flotation device. This is not always good because generally it’s fixed to the bottom of the frame. So the motor wants to sink and the tank wants to float. This results in your being floated head down and ass up! Now I do know a couple of people, not on this forum obviously, that can talk through their ass but never anyone who can breath through it

A similar thing happens with regular paraglider harnesses especially the older pre airbag style with foam back protectors. See Kaye’s account of a sea landing (crash), link on my earlier post in this thread. Out in Olu Deniz, Turkey where SIV courses over water are regularly held there was much discussion as to best practice. I remember it goes something like this: Should you ever be in the situation where you are just going to end up in the water commit and prepare as early as possible. Remove your boots and anything heavy from your pockets. Sit well back in the seat and unbuckle. Steer to make your final approach downwind. Release the brakes and go to max trim speed. Drop out of the harness as high as you can without hitting the water too hard, about 3meters. The glider will continue without you until it hits the water. Take note of where it hit and swim toward shore leaving a lot of clearance between your course and where the glider lines are likely to be.

Thanks paul now i understand.

“The tank might be your worst enemy” Is so true, John. But it can help, too. Over 20 years ago when ppg-specific wings were in their infancy and pretty much all pilots used pg wings, I was flying a Nova Phocus wing about 75 yards offshore Boca Raton. It was a great paraglider wing but had a nasty habit unknown at the time of stalling when you made a hard turn against the torque of the motor when using it for ppg. I turned sharply against the torque to begin my beach landing and the wing stalled at 152 ft. I hit the water at an 18-20 ft/second descent rate. Since I had only a couple inches of gas in the tank, I bobbed up but the tank wanted to immediately place me face down. I instinctively leaned back and balanced myself on the near-empty tank. In a miraculous stroke of luck a surfer came by and let me grab his board to paddle in, wing and motor still attached to me. Bad mistake…I nearly drowned as I hit the wave break area when a big wave tossed me over and the lines wrapped around my legs. Just as I was about to burst my lungs I broke through the water’s surface and gulped in some air. Always unclip from your harness and get away from those lines!

Hey Bill
My water landing was on Ians’ Monster. Which I purchased from you.
Good memories.

Here is another old memory based on Voltairs DK Beat!
There were Lawn Implement dealers on the East Coast that had the entire Dk Daichi Kosho line of PPG Flying gear on their showroom floors.
I remember walking into a John Deere dealer with Danny Kriseler.
They had the entire line up…
DK Beat
Whisper
Whisper GTO
The Skytrike with the hang glider
And the Hathor and Symphony wings.
Imagine…
Give me

As a dive instructor, I have a good deal of experience with electronics and salt water, so will take a stab at this.
I was also taught to unclip before hitting the water. If you had a flotation device, you could save more of your gear, and it adds a good bit to your safety. (In the event you failed to unclip or are line tangled)
I do not believe the risk of electrocution would be anything notable… particularly as you’ve hopefully already unclipped and are escaping as everything hits the water. (Don’t get dragged down by a line!) The battery cells burning up and creating a toxin factor seems more likely.
Salt water will destroy anything that’s even mildly corrosive… including most stainless steel. (If it’s magnetic, it rusts) When the battery contacts enter the water, the battery will discharge, most likely burning out the battery. The salt water will erode the contacts, and it will destroy any circuitboards or such it comes into contact with.

Once an item is immersed in salt water, the best way to possibly save it is to keep it immersed until you are able to immerse it in rubbing alcohol. Once exposed to the air, the oxidation will occur within seconds, so this allows you to replace the highly corrosive salt water with alcohol which has a very low evaporation point.
Your probably looking at all new batteries no matter what. New motors if the old motors weren’t water proof. All new electronics if the electronics weren’t waterproof. Salt water’s the ultimate destroyer.
You could make it all waterproof… buy a waterproof motor, and put everything else in a waterproof housing… you would need to be sure the housing could both handle and vent heat though.