Here are some notes about my ongoing experience with the prebuilt batch 4.

3d Printed Hoop Connectors: These have pretty tight tolerances and at first seemed way too tight but for those in the future just sand paper them for a minute and its a perfect fit.

Motor Direction: There were no stickers (which I only found out was a thing after finding a video that mentioned them which I added to the OpenGuide) so I made a guess and turned out to be opposite so I had a really nice breeze and back trust

Viz-Torque: From my gas motor training this stuff came in handy so I spent an hour putting this over every screw/bolt I could find to hopefully help spot anything that might start coming loose. We will see how that works out and I’ll report any findings. Has anyone discovered a part that gets loose over time?

Velcro vs GliderPilots’ Rails: I bought a ton of velcro but I wasn’t a fan once I started trying to attach the batteries so I went with GliderPilots’ rail system. I used his spec’s except I went instead with this stainless steel 8-32 x 1" screw. I also had to go with doubled up 75 pound zip ties instead of 150 because the 150 ties were too wide for the 3d printed design because I had to print everything with a negative 1mm horizontal expansion to get my tolerances right. Without that change it was far too tight for the pieces to slide without locking up. Also 14 inch ties weren’t long enough maybe because 7s batteries are a little thicker than the 6s? So I used 2 zip ties together to make it long enough. I did that twice per rail so 4 zip ties per battery. (pictures to come later tonight) 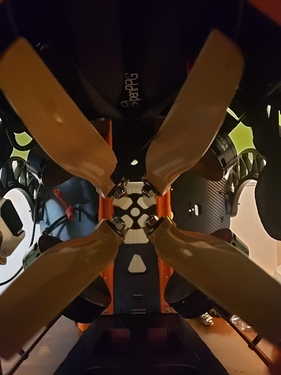 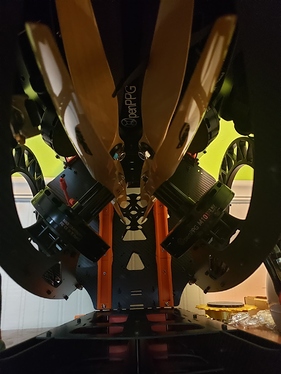 Another issue I had was with printing petg. I went through about 5 failed attempts with various brim, raft, flow, temperature, etc setting tweaks. Most prints almost made it but would always end up failing so I finally went with PLA and I only had orange on hand

Another big issue is that with batch 4’s PCB location. I had to unscrew 2 screws that were in the way of the rails and I couldn’t drill a hole for the rivet in fear of puncturing the PCB. In one of the images you’ll notice a missing rivet

When I get home I’ll see if I can drill higher up on the part to avoid the PCB.

Voltage Alarms: I got these and have only done one quick 2 battery (at storage voltage) test to see if everything was working and they instantly started beeping when I hit full throttle and they do not stop until unplugged. I’ll test tonight with 4 fully charged batteries to see if they work better but I suspect I’ll want to buy voltage alarms that don’t continue to beep if the voltage only drops below the set value for a short time. Any suggestions?

Other Little Things: How long should I hold the pre-charge switch before fully turning it?
It would be cool to include a print out in the package of a FAQ/manual sheet for things like propeller orientation, motor direction, battery hookup, safe voltages, other things found on the guide page, etc.

How long should I hold the pre-charge switch before fully turning it?

One second is plenty of time if you used the same resistor I did.

Has anyone discovered a part that gets loose over time?

I made sure all my bolts were tight and never had any come loose over time. The hinges for the legs and the arms get loose from wear and need to be tightened occasionally.

I suspect I’ll want to buy voltage alarms that don’t continue to beep if the voltage only drops below the set value for a short time. Any suggestions?

Those alarms all look identical between multiple suppliers on both Amazon and eBay but they aren’t all the same. Find a supplier that states in the Q and A that they stop beeping upon voltage recovery. If it doesn’t say then ask.

One problem with those alarms is accuracy with anything other than the first couple cells. I’ve had to buy more than needed and sort through and find the most accurate ones.

It’s normal for voltage to sag during amp draw. 2 batteries will sag twice as much as 4 batteries. Therefore, you can’t apply full throttle with only 2 half charged batteries and expect the voltage to stay above 3.5 volts per cell. When I am at the end of my flight I don’t apply full throttle. If the voltage drops below 3.5 per cell (49 volts total with 14S) I ease up on the throttle. I do this till I can no longer maintain level flight.

I used blue locktite on all mine.

I took my first flight! The power is incredible compared to the top 80 and ac 130 I trained on. I never went full throttle. 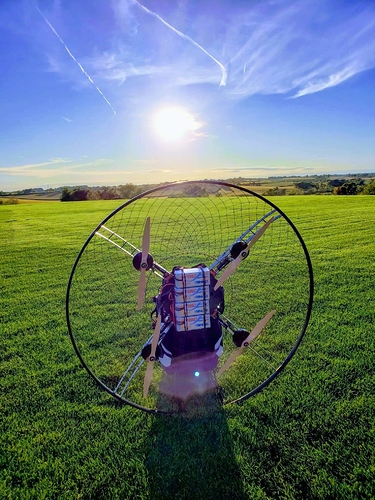 The top 2 major problems Im having so far is that the throttle always displays 100% so I go by the voltage readout instead. I did notice these were not connected? 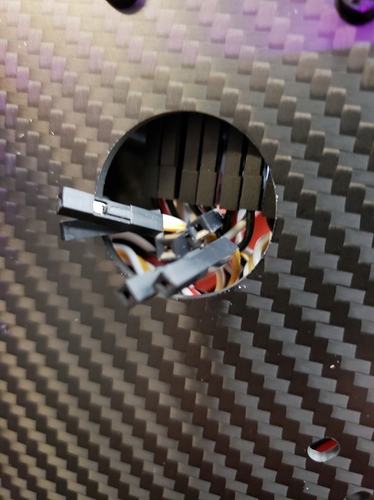 And the balance charger only works on one side so I can only charge 1 battery at a time. Channel 1 throws a battery disconnected error almost instantly. 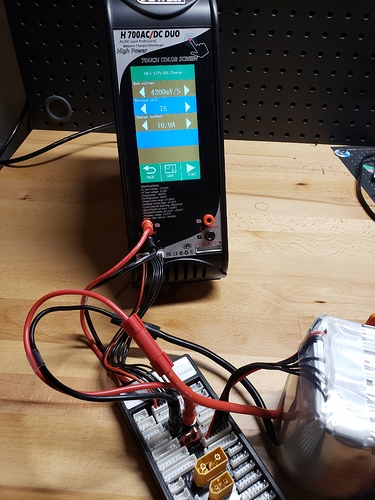 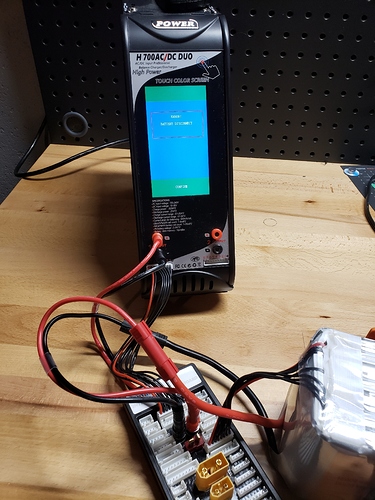 I wonder if there is some type of warranty or maybe Im doing somthing wrong.

For some reason they left the batch 4 controller programmed for 6S even though it’s intended for 7S. When I tested it with 6S the capacity percent was correct. It’s a simple program change but you need to learn how to use the Arduino software.

There are unused wires coming from the ESC so that’s not an issue.

Nice job on the takeoff!

Great job! Looks like a wonderful spot to launch.
Like @GliderPilot said the firmware shipped with Batch 4 slipped by with the voltage range set to 6S instead of 7S. However if you reflash the controller it should be quick to fix that.

I have since updated it for 7S and moved the values to be easier to tweak (see below).

Let me know if you have questions around flashing.
Can’t wait to see more flying videos!

Ah that makes sense! Ive used arduino a lot in 3d printer firmwares so I think I can get this done. Ill search around the forum for more info.

Arduino update success! Yay. Now i want to make it play the mario theme for the armed beeps. Also any chance I can exchange my messed up charger? For its cost Id like a fully working one

Glad it was easy!
Make sure you plug everything in snugly. And yeah I’d contact the manufacturer. It seems to a somewhat common failure with that model.

the “armed” beeps actually come from the ESCs, not from the arduino.
But I wish I could reduce the loudness and the frequency of beeping of those… really annoying.

I also might try and deep dive into adjusting how the input is smoothed in and out because it felt pretty touchy and instant. I’ll need to fly it more to see how I feel about it.

Here is a precompiled .bin for the firmware fix on batch 4 in case somebody finds it useful.
eppg-controller_7s_percentage_fix.zip (30.3 KB)

It should be easier to install for people who don’t know or don’t want to setup arduino.
You still have to install arduino, find bossac.exe within the files arduinio installs. Drag it in a cmd prompt, add -e -w -v -b then drag in the bin file uploaded above and hit enter (with your controller attached via usb)

I started working on a flashing tool like this a while back but was never happy enough to release it.
For the simplest route you could include the bossac.exe in the zip and write a small .bat script that you would just have to double click on which runs the same commands with the included .exe.

Only other thing would be making sure drivers are already installed.

Alright anyone have a batch 4 that wants to try this out. Just have to double click the AutoInstall.bat file with the controller plugged into your computer.

For now I have 6S batteries for my Batch 4 so I won’t need this firmware fix for that issue. Have you snuck any other goodies into it?

Goodies is my next goal