I have another issue I’m struggling with, without plans (or photos for that matter).

In the OLD build video in the second or third step the main red anodized hinges are installed. In the V4 kit, those hinges have small holes in them, which makes them have a directionality. Can anyone share a full build I know which way to orient these hinges?

For the standoff issue…

For the hinge issue… 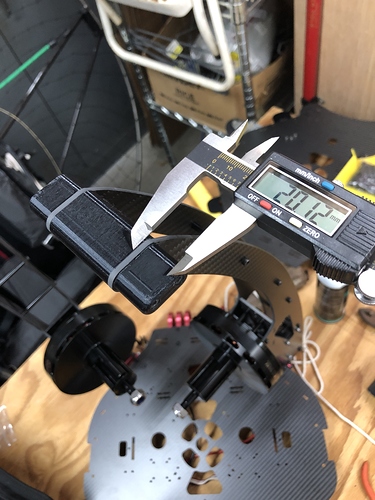 Thanks for your reply and the photos.

Yes I’m assembling the arm the way you described but I can assure you my M3 30mm bolts bottom out on the threads in the standoff so they never tighten the small 3D printed hoop holders.

If the standoffs were threaded all the way through, it would work, but mine are only threaded a few mm in from the end.

Thanks for the hinge photos too. I was actually asking about the larger main hinges. Those are different in V4 if my eyes are right

Ah, ok, I haven’t actuality attached the base to the body yet, which I guess is the hinge you mean, so I probably just haven’t got to this issue yet.

That threading issue in the standoff is odd, but like you say, seems like your Amazon item should resolve it

I can assure you my M3 30mm bolts bottom out on the threads in the standoff so they never tighten the small 3D printed hoop holders.

At least the hole goes all the way through so you won’t bottom out in the hole itself. The bolts will self tap a little further into the hole just fine. Are you sure you aren’t cross threading the bolts into the standoffs? I typically like to get any bolt started by hand but these are tight through the 3D printed part making that hard to do. You could drill the 3D printed part to make the bolt a slip fit. That would make assembly a lot easy.

I was actually asking about the larger main hinges

I recommend using the stops that I designed and then it won’t matter which direction you install the hinges. They work really well:

About the larger main hinges, the small holes and the orientation of the upper leg hinge can be seen in this video at 1:04: 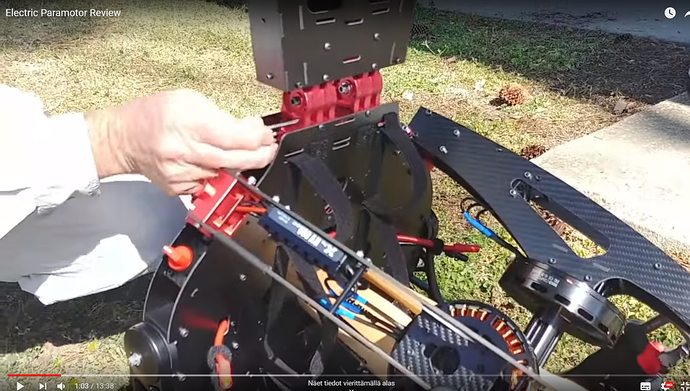 And about the M3 30mm bolts and the small 3D printed hoop holders:
I initially had the same conclusion as you that they bottom out on the thread in the standoff, and that they should be 25mm bolts in order to fit.
But once I tightened the whole arm end (with all the three 3D printed parts), it became nice and tight.
I am not sure what happened there

Maybe it only felt like bottoming out as screw tightens pretty tight to the small 3D printed loop holder hole too, and because the standoff turns around easily inside the big 3D printed part.
Although, I think I even tried assembling only the small hoop holder through carbon plate to the standoff to see if it was bottoming out. But maybe I remember wrong.
Or maybe I just used (the) force in the end to make them tight. Well, I don’t know but they are good now. 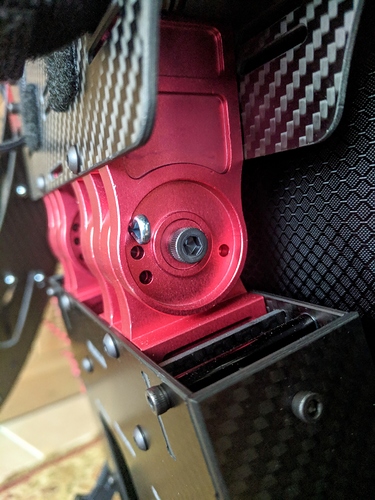 This is a photo from mine. Works great.

I think this is exactly it - everyone is just powering the 30mm bolts through the last few (non threaded) mm. While this will work (just tested it) it’s totally not ideal. I’ll do it for now and see if I can find more appropriately sized bolts. FYI the standoffs I linked are also only threaded for the first 10mm

Ahh, you’re Robbie’s friend! I trained with him down in Destin. Tell him you met the guy From his class working on a new throttle for gas powered units!

This video and the post after help. Thanks so much!

Is everyone using cotter pins to secure these or is there another method (perhaps a pin with a ball lock)?

Several people are using the hinge stops that I posted a link to above. I think it’s a much better method. Here’s how it works: Start with it on its back. Fold the legs out to the stops. Fold the bottom arms out. Put the small hoop pieces in place. Now the legs won’t move forward because of the stops or backwards because of the hoop so you can stand it up and finish putting it together. Also notice the gooseneck bars now have a resting spot against the bottom arms when you stand it up. Any other way the gooseneck bars get in the way of opening the bottom arms. Works wonderful! I use it almost every day for a year now! Here’s a video of what I just explained:

While this will work (just tested it) it’s totally not ideal. I’ll do it for now and see if I can find more appropriately sized bolts.

You only have to do it once. A hardened steel bolt will tap into aluminum just fine. There are absolutely no issues created by doing it this way. I prefer the longer bolts for strength. You don’t have to worry about them vibrating loose because the last little bit acts like a lock nut. Haha… just trying to turn your “less than ideal” situation into an ideal situation.

Yes, he is my friend and my instructor. We fly together from time to time since I live there about half of the year. I will be sure to tell him. When did you train?

Here is a link to the photos of my build…a work in progress. Everyone’s build is unique, but this may be of some help. I have incorporated bits of my ideas, Paul’s, Rob’s, Phil’s and other’s ideas.

I like the cotter pin…with a keyring through the loop. It is opened slightly and will not come out without a pull. It locks the frame into place…and the outer cage adds extra rigidity. It is just a personal preference.

I hope this helps.

hello I’m synonymous s.Building but I’m not sure how to connect the ESC at the HUB 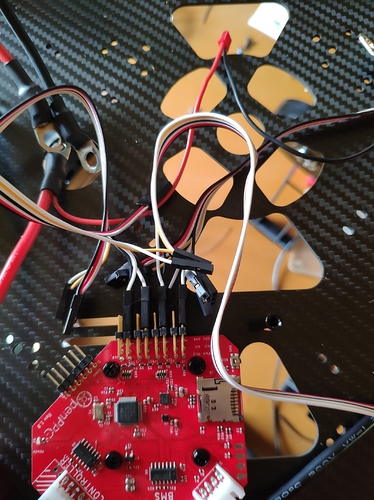 So far so good… now the telemetry is the white, red, black. The other 2 individual wires aren’t used.

This should help you all out when connecting the electronics

@zjwhitehead, the display is upside down when the controller is in the right hand. Is there a quick fix or do we need to alter the code? If that’s the case will you please send a link to the code?


Ignore the comment but that should do it.
next page →