LiPo Batteries in the Cold

This is a long post so I’ll start with a picture of a puffy Bonka cell to perhaps grasp and hold your attention. 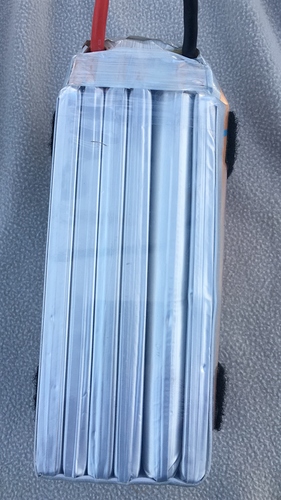 I haven’t been too worried about flying with cold LiPo batteries because they get on the borderline of too hot after each flight anyway, even with 4 Bonkas. However, the other day I flew with batteries that sat in my car all day in winter weather and while climbing with full throttle I noticed the battery percentage read zero shortly after takeoff (note: this is only while holding at full throttle). It’s normal for the percentage to read around 25% with full batteries at full throttle but it’s not normal to read 0% that soon after takeoff.

I since learned that batteries have a higher resistance when cold. This also gives them an effectively lower C rating. So, applying full throttle with cold batteries will discharge the cells too fast and could potentially damage them. That was only mistake number one.

When I went to charge my batteries after that flight I had one cell with a voltage of 2.7 while the others were all around 3.5. Below 3.0 is considered a dead cell. But that cell quickly caught up with the others during the charge cycle and it even held a full charge at 4.2 volts. My plan was to keep an eye on it by landing early the next time I flew but I didn’t exactly stick to that plan. That was mistake number two! But at least on this flight I didn’t start with cold batteries.

When I landed I had not one but two puffy cells. Each puffy cell was in a different pack as well as in a different parallel circuit. I started the flight with one damaged cell (which wasn’t puffy) and landed with two bad battery packs with a puffy cell in each. I did not start with cold batteries and I did not overdischarge them on that flight so I was puzzled as to why would I had two puffy cells from that particular flight when this never happened after well over 100 flights. The voltage of the good cells ended at approximately 3.5 volts and the puffy cells were at zero.

After much thinking I have an explanation that makes sense. I hope everyone here already knows not to plug batteries in parallel with each other if the voltage isn’t exact the same. Doing so will cause the pack with the highest voltage to charge the pack with the lowest voltage at near infinite amps! Definitely not a good thing! I started with all of the cells at 4.2 volts but remember that one of my cells was damaged from a previous flight and therefore it probably dropped in voltage much faster than the others and eventually got puffy and dropped to zero volts. This left me with 11 cells in parallel with 12 cells. The pack with 12 cells then tried to charge the pack with 11 cells with near infinite amps until the weakest of the 12 cells puffed and dropped to zero volts afterwhich the parallel circuits had equal voltage. This left me with 11 cells in parallel with 11 cells so everything was balanced again. The damage probably didn’t quite happen in stages like I described but perhaps more simultaneously because the parallel circuits want to alway be equal.

With cells puffed up that tight, how likely are they to bust open and burst into flame? It’s a scary thought indeed!

I wouldn’t fly this the cell your are showing in the picture (the second one from the left) I haven’t had any of my cells puff like that, but you can get replacement cells from the manufacturer if you want to take the bad one and replace it with a new one. That might be the best option if you feel confident replacing it.

I definitely wouldn’t fly with puffy cells like that! I had a cell drop down to 2.7 volts that charged back up to a full charge with no problem and was NOT puffy. I flew with that cell and it’s probably the first one that got puffy and now reads zero volts. This caused another pack in parallel to also go bad.

As a preventative measure and added safety I purchased a couple of these low voltage alarms:
https://www.amazon.com/dp/B072JSLP66?ref=yo_pop_ma_swf

I flew with two of these alarms yesterday and I plan to get two more so I can fly with one on each pack (4 packs) If any individual cell drops below the set limit the alarm sounds. They are really loud but I can’t hear them when the motors are running at full throttle. I don’t typically fly with constant throttle anyway so they should work good to let me know if an individual cell drops too low. The one thing I don’t like about these is once the alarm is triggered it won’t stop till you push a button (which I can’t reach on my back). I was hoping they would trigger the alarm under load when the voltage is lowest and then turn off when I let up on the throttle to allow the voltage to go back up. Have you guys @zjwhitehead and @Pdwhite considered an individual cell monitor like this for the controller? Note: I did NOT run my packs too low but rather aquired bad individual cells that dropped too low.