This isn’t entirely related to E-ppg, but I wanted to show many of you just how far battery and motor technology has come.

To start out, the secret sauce for building endurance drones is to use the lightest possible prop loading, the most efficient motor and props possible, high gravimetric energy density cells, and have the battery cells be 1/2 the AUW for the best balance of endurance and performance or 2/3 the AUW for the absolute best endurance. Much of this also applies to E-ppg. 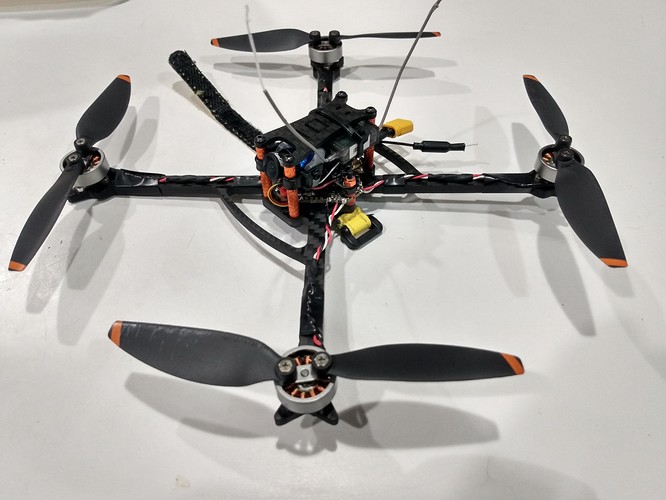 IMG_20201221_205448159_HDR4160×3120 1.62 MB
So back in December I built this drone to see how long of a flight time was possible from a 5 inch quadcopter using only off the shelf components with minimal modifications. For those who don’t know drone terminology, 5 inches refers to the diameter of each prop. So it’s a very small drone to be built for endurance, as most endurance focused drones use 25+ inch diameter props. The first challenge was getting the prop loading as light as possible. I was already limited to 5" props, which means the only thing I could do was make the drone lighter. I eventually settled with a 20 gram frame, a system which combined multiple electronic systems into one and rediculusly light motors. In all, I was able to get the empty weight down to 96 grams which I believe is the lightest in the world. To put this in perspective, most 5 inch drones have an empty weight over 350 grams and the second lightest 5" drone ever built(that I know of) had an empty weight of 109 grams. I have multiple batteries, but for best endurance, I used a 2s battery made from Samsung 35E cells. As of now my best flight is 46 minutes with a 2s VTC6 battery running to 3v per cell and the calculated flight time for the 35E battery is over 50 minutes. The one other amazing part is that the drone is completely inaudible while hovering less than 40 feet away. To top it off, I am considering building a custom frame, switching out a few components, and modifying many other components which could drop the weight down by another 15 to 20 grams and allow the drone to run to a lower voltage where I could them go for the sub 250 gram endurance record and the 5" drone endurance record. (both are 72 minutes)

I finally I am looking into building a bigger endurance drone and using it for search and rescue. With 32" props it would be capable of over 2 hours of flight time, and it could carry a 500 gram camera payload for about 85 minutes at a time, more than doubling the flight time of current drones used for search and rescue and hopefully saving lives where it would otherwise not be possible.